Washington, D. C. - President Bush announced late yesterday evening that he has ordered the First Lady and their twin daughters Barbara and Jenna to wear burquas instead of the Western outfits they have become accustomed to wearing. Female visitors, whether members of Congress or foreign heads of state or other dignitaries, must also don the Middle Eastern garb.

“There will be no more jeans, mini-skirts, tank tops, spaghetti straps, shorts, or other such attire on the premises of 1600 Pennsylvania Avenue,” Press Secretary Tony Snow told the press. “That’s the White House for you, John,” he told John Roberts, the CBS television's White House correspondent.

The dress code was established on the recommendation of Donald Rumsfeld’s replacement, the current Secretary of Defense, Robert Gates, Snow informed reporters, and “represents a show of solidarity with the movers and sheikers, so to speak, inside and outside Iraq. By having our women, now our chattel, adopt the same type of dress that Arab women wear, we are showing our willingness to conform to their culture and to adopt their values, which should help us to win the hearts and minds of the Arab people.” 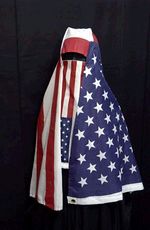 Condeelezza Rice chose a red, white, and blue burqua that is designed to resemble the American flag. “I thought it appropriate to wear the colors of my country,” the Secretary of State said. President Bush told her that he thinks she looks “lovely” in the burqua and “very patriotic.”

The First Lady and the Bush’s daughters opted, respectively, for canary yellow and bluebird blue. “Laura looks ravishing,” the president said, and “the girls look cuter than ever.” In announcing the new standards of dress, the president quipped, “I wish I could wear one, too,” to which Jenna replied, “You can have mine, Dad.”

The burqua covers all of the body except the eyes, the hands, and the feet.

The First Lady has rescheduled an appointment that she had for tomorrow morning because, she said, Speaker of the House Nancy Pelosi is due to drop by to discuss a few domestic items with her husband, and Mrs. Bush wants to see what the Congresswoman looks like in her burqua. “The congresswoman is believed to have bought something in fuchsia with a big bow at the side of the waist,” Secretary Snow said, adding, “but, if so, the bow will have to go, as the Arab dress style emphasizes plainness and utility over beauty and ostentatious display.”

Asked if the president really believes that having female visitors to the Executive Mansion wear burquas will help in the war against terrorism, Secretary Snow replied, “The president has every bit as much confidence in the wisdom and ability of Secretary Gates to turn the Iraqi situation around and win this war as any member of the Democratic Party, Ms. Pelosi included. Otherwise, I‘m sure that neither Congresswoman Pelosi nor Senator Hilary Clinton, for that matter, would be wearing such a garment or have one in her wardrobe.”