UnNews:Finland to cut its embarrassing ties with former Imperial overlords

From Uncyclopedia, the content-free encyclopedia
Jump to navigation Jump to search
Finland to cut its "embarrassing" ties with former Imperial overlords

The Prime Minister of Finland posing with the Finnish flag, possibly for the last time ever.

Saturday, March 19, 2022
FINLAND, Third Reich -- As the military invasion of Ukraine and the magnitude of absolutely unnecessary bloodshed keeps ever accelerating, several countries have publicly condemned the actions of Russia and denied their past connections with the country. This has resulted in the several renunciations of past major achievements by Russian historical figures - latest of which being the removal of Yuri Gagarin's name from the Space Foundation's records as the first man in outer space (and so mysteriously placing America as the first nation with a successful space program). Now the North-European country of Finland – a country with a common geographical border with Russia - has followed suit, not only denying the close Eastern proximity of Russia, but also engaging in radical historical revisionism in regards to the shared history between the countries.

“In light of the terrible events occurring right now in Kyiv we want to further distance ourselves from the hugely problematic Russian establishment,” explains Sanna Marin, the Prime Minister of Finland. “It is true that Finland has been an independent, autonomous country for over a century now, but the circumstances in which Vladimir Lenin – a male Soviet politician (!) - granted independence to Finland in 1918 are... a bit iffy, to say the least. We don’t want to conform to dated patriarchal systems in which global superpowers are supposedly able to bestow or deny a country their autonomy however they please. No, we don’t want to acknowledge anything of the sort. In other words, as of this date, March 19th, 2022, Finland publicly cancels their past relations to Russia, and so no longer acknowledges their former status as an independent country,” Marin concludes her press release.

This sudden, shocking declaration and surrendering of Finland’s sovereignty seemingly over-night has understandably caused some major nation-wide opposition and confusion. But does this mean that, since Finland supposedly never gained its independence from the Soviet Union, it is now in fact part of the Russian empire? We called and asked the President of Finland, Sauli Niinistö, to explain the situation in full for us.

“Well, simply put, we publicly deny the involvement of Russia in the Finnish history records in all instances. Yes, this extends to the events of 1917 and 1918 that led to the granting of independence, but we also condemn the 1808 invasion and the power struggles that initially shifted the provisional property rights of Finland from Sweden to Russia,” Niinistö says.

So does this mean that Finland is now under the Swedish regime again? 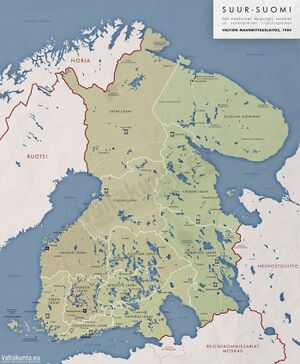 A proposed area map detailing borders for the newly-formed state of Finland under Germany's regime.

“That is the question, yes. We are still in the process of figuring that out... but the prevailing scientific opinion of our newly-founded Sector of Historical Revisionism is that we are, in fact, part of the German empire. Nazi-era Germany, to be precise. While we have now come to a mutual agreement that Finland has never been part of the Russian empire, we can’t outright deny the events of the First and the Second World War either. It is in our beliefs that, as the Winter War of 1939 between Finland and the Soviet Union now has never officially happened, the Nazi Germany didn’t consider Finland as an established ally of the Axis powers either and so subsequently invaded us."

"Of course, since Germany merely conquered a small eastern front of the Swedish kingdom, that also means that the nationalistic Fennoman movement - which rose to power in Finland during the now non-existing historical tie-in with the Russian empire - never occurred. So Finnish as a language never actually progressed to its prevalent status and just slowly withered away from the public consciousness. Finland will of course remain as a bi-lingual country, but the official languages will be Swedish and German from now on. There is no more Finnish culture to speak of either. Of course this may upset our cultural sectors, but it's a small price to pay in order to avoid being labeled as Russia-sympathizers by the mainstream media and the angry mob of Twitter users," Niinistö muses with fear in his eyes.

"Anyway, so what we are currently working on are the full implications of merging with Germany's history. How did the Second World War play out, now that Finland's geographical location was an even more major strategic point in the Third Reich's conquests... We believe that, perhaps, Germany didn't even lose the war after all.“

Well that is very progressive of you and... wait, Mr. President, what did you just say?!

“It is true that Finland already partially aided the Axis powers during the war, but the idea that now there were no pre-existing aggressors on the North-Eastern borders on Finland – or “The Finnish-Germanic Empire” as we'd like to now call ourselves - is fascinating to think of. What if Finland would have unleashed its full potential on the Eastern frontiers during the Continuation War? What if, in fact, the Allied powers lost the war, and Germany had seized Moscow? In abandoning our formal ties to Russia we have been considering the idea that Russia, as it is, doesn’t even actually exist anymore, but is rather just a big Eastern expansion of the German soil.”

Mr. President, I... that is quite the leap in logic-

“I mean, just think of the possibilities that the newly formed Russo-Germanic-Finnish super empire now has with its tremendous arms strength. No other superpower could come even close to what we could achieve – a total world domination, perhaps. In fact – and this is yet strictly off-the-record – we are to participate in a strategy meeting next week with Olaf Scholz, the current Fuhrer of the German Reich, about our ideas of expanding the Empire into mainland Europe as well. The idea is to strike France as soon as our invasion of Ukraine has been done with.”

MR. PRESIDENT! Are you saying that Finland is in fact the aggressor in the current invasion of Kyiv?!!!

“Well... yes, that’s true, that is in fact what is happening. In light of the current shocking events we completely deny our involvement with Russia, past-and-future, and fully commit to the idea of Ukraine rightfully belonging to Nazi Germany. And Russia too. I mean, Russia belonging to the Nazi Germany. And to Nazi Finland. Never underestimate the power of historical revisionism. So, our final message to the western decadent NATO scum is this; beware! Finland is coming for you.”

Incredible. UnNews will be following the situation as it progresses.