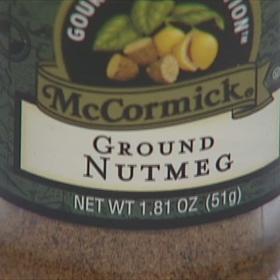 A small plastic bottle of the killer weed.

The demon weed, often found in egg nog and pumpkin pie during this Chrholiday season, contains myristicin, a drug that, in huge quantities, can have the same effects as marijuana and even cause hallucinations.

George Fredericks, Director of Pharmacy at Albany Hospital, says youngsters are seeking out the evil reefer despite possible "nasty" side-effects, which include headaches, nausea, heart palpitations, dehydration, and death. "If these hit you, you're not going to want to do nutmeg again," he says.

Dr. Fredericks has seen the problem personally. "I hosted a Christmas party, and my daughters kept going back to the egg nog. --Which surprised me, because we kept the booze out of it this year. They got pretty buzzed. Happily, we didn't have to worry about dehydration."

The DEA issued a press release announcing the "redeployment" of about 600 officers from the Mexican border to spice racks in supermarkets. Separately, the Department of Defense will take time out from spraying poppy fields in Afghanistan in order to seek out the even more lucrative nutmeg crop.

The DEA is anxious to show success at something before the new Congress takes over with the opposition in control of the House of Reprehensibles. To date, the DEA has not made a dent in the rate of use of marijuana or the harder drugs; its most recent success is to induce millions of Americans who don't want to get their names in a federal database to switch from the allergy pills that worked, to generic equivalents that don't.

The government may have difficulty making the ethical case against nutmeg. After all, President Obama famously wrote in his first autobiography, Dreams of My Imam, that he used "blow" (cocaine) as a youth--"And a little nutmeg, when I could get it."