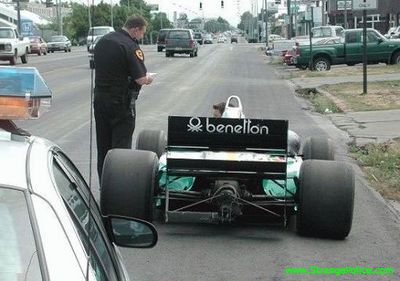 A typical episode of Cops, back when the show was actualy goo-- okay-ish.

[RACIST CITY], [Racist state] -- The inexplicably long-running Fox-Spike-Paramount Network docuseries Cops has been cancelled, 25 years too late. The April 8, 1995 episode of Cops was the last episode that was even remotely watchable, if any of them ever were. I don't remember specifically what happened, but a bunch of stupidity ensued and it was like something out of Jerry Springer.

What brought on the much-belated cancellation of this show that you've long seen in the TV listings and wondered how it was still on the air? Well, to answer that question, have you not seen the shit happening on the news? Not only do we have a President and a virus killing us, but we have pig cops killing blacks, the seminal one being George Floyd.

Paramount Network said in a statement:

As with most ViacomCBS owned TV networks, the show will be replaced by reruns of Martin, Living Single, Fresh Prince of Bel Air, Kenan & Kel, In Living Color, and The WB and UPN sitcoms.

For more fake news on this topic, read:
Pink Floyd killed by coronavirus

For more fake news on this topic, read:
Power Rangers is surprisingly still on, canceled
Retrieved from "http://en.uncyclopedia.co/w/index.php?title=UnNews:Cops_cancelled_25_years_too_late&oldid=5990380"
Categories: