The Fresh Prince of Bel-Air

From Uncyclopedia, the content-free encyclopedia
(Redirected from Fresh Prince of Bel Air)
Jump to navigation Jump to search

Freshus sitting upon his throne as the "Fresh Prince of Bel-Air".

For those without comedic tastes, the so-called experts at Wikipedia have an article about The Fresh Prince of Bel-Air.

Freshus I, the Fresh Prince of Bel-Air is a mythical monarch originally of Philadelphia that conquered the far-off kingdom of Bel Air, despite the substantial differences between Philadelphia and his new domain. His tale is one of how his life was changed unexpectedly (got flipped, turned upside down), leading up to his assuming the title of "Prince of Bel Air".

The Fresh Prince was discovered by Los Angeles network executives rifling through garbage (as is their wont) when they came across several ancient tablets. Incapable of reading the tablets but heavily fiscally motivated, the executives sold the tablets to a research laboratory, where the tablets were decrypted.

It is believed Freshus was born and reared in an ancient kingdom roughly in the same area as modern-day West Philadelphia, roughly around 1,990 AD. There, he spent most of his days on ancient playgrounds where he partook in several activities common to youths of his time. The tablets state that his activities included idleness, an unexplained activity that translates roughly as "maxing", relaxation, as well as playing a sport modern archaeologists believe to have been a precursor to basketball. 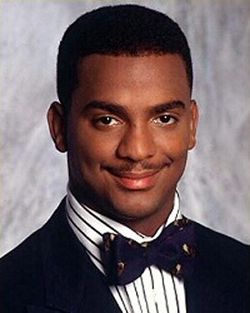 Although the tablets are missing pieces, archaeologists have concluded that the reason for Freshus' exile from Philadelphia occurred due to attacks by barbarians. These invaders (who are damned by Freshus' chronicler as being up to no good) ransacked Freshus' kingdom and the surrounding area. Freshus was involved in a minor skirmish, the details of which are unknown at present but were apparently enough to frighten his mother, who banished Freshus to live with his uncle in the distant kingdom of Bel Air for his own safety.

According to some obscure accounts, Freshus protested, but his mother insisted that he leave immediately, packing his belongings, giving him a farewell kiss, and giving him some kind of letters of transit. Resigning to his fate, Freshus applied his favorite music record and left for Bel Air.

The Journey to Bel Air[edit]

Much to Freshus's chagrin, he was put near the front of the boat that would take him out of Philadelphia. While on the boat, he was given a goblet full of what was originally translated as the mystifying "essense of satsuma", but modern translations call "orange juice". Freshus then pondered the lifestyle of the citizens of Bel Air, thinking that his enforced exile may not be a bad thing, but recent scrolls from a similar era found in far-away Compton say that he considered the uptight behavior of the people he will meet in Bel Air. Whatever his thoughts on his move, after thinking about how unlikely someone would send a person like himself to such a place, Freshus came to the conclusion that everyone should be prepared for when he inevitably took the throne of Bel Air.

Here the stories diverge. While the Los Angeles Tablets state that the Prince fled directly to Bel Air in order to avoid a horsemen that he mistakenly took for a guard that was willing to incarcerate him, whereas the Compton Scrolls state that he hailed a train of chariots to escort him to Bel Air. The chariot that Freshus chose was adorned with luxurious but eccentric red tesserae, bearing dots, and also bore the name "Fresh" on its hind end. It is believed that Freshus took this as a sign from the gods and utilised the chariot, crying out to the charioteer, "Yo holmes, to Bel Air!"

It is believed he arrived in Bel Air in good health, albeit boorishly cursing the man's stench.

After finally arriving in Bel Air, which would be modern day England, Freshus' uncle King Philip the Phat was severely unpleased with his arrival, but his wife Queen Vivian was and so were their spawn. Carlton, Freshus cousin, was short in stature, often confused with the royal midget, and was annoyed with the arrival of Freshus. However, Carlton gradually succumbed to Freshus' mind powers, which made him accept Freshus, though it wore off occasionally. Hilary, Freshus' cousin, was not concerned with him, for she usually just cared for herself and aggrandizing her own garb and dowry. Freshus' last cousin, Ashley, was not like her siblings, for she was young and so Freshus took her under his wing and dubbed her Ash, grooming her as his successor. The family's sarcastic man-servant, 'Jeffri' was spared the loss of his job because Freshus found him amusing in some manner, possibly food-related.

He taught Ash most of what he knew, though he kept most of the dark arts for himself, including the forgotten practice known as 'maxxing'. Freshus' Aunt Vivian often vexed King Philip, but after Aunt Vivian fell pregnant in an off-screen event, King Philip was finally able to be rid of her, only for a woman with an identical name and personality to replace her. Freshus, with his supernatural powers, commented on this.

Eventually Freshus was helped by Sir Jazz, an ally who sometimes acted like an enemy, and after 6 seasons passed he finally overthrew King Philip and became the ruler of Bel Air. Freshus slew all in his quest for power.