The French Prince of Bel Air 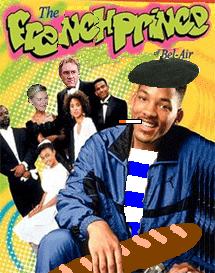 The 14 million DVD boxed set. Would be thrown into bargain bins across the world but would not fit. Instead usually used as replacement for furniture in third world countries. Also, apparently black people smoke cigarettes backwards.

“No matter how many time you polish a dog turd, it's always just a dog turd.”

~ Noel Coward on The French Prince of Bel Air

“The French Prince of Bel Air is a cheese eating surrender monkey, like all French people.”

~ Optimus Prime on The French Prince of Bel Air

“I was a little gay on the set only a little. I almost had sex no a shower a drink with another guy.”

“I'm not getting in a fight with you! I surrender, and I will move to Bel-Air!”

A spin off from The Fresh Prince Of Bel Air, The French Prince of Bel Air is a sitcom/piece of a somebody's fractured imagination, and the spiritual brother TV show to Wilde Wilde West (a semi-autobiographical show written and starring Oscar Wilde).

Starring Will Smith and Gerard Depardieu, The French Prince of Bel Air details the hilarious antics of a Negro man (Will Smith) who moves to Paris, France and tries to assimilate himself into the normal lives of the French. He fails miserably.

His conveniently French Uncle Jambon (Gerard Depardieu) takes him in to live under his roof, but only on one condition: he becomes French by marrying a beautiful French Woman with excessive amounts of underarm hair.

The only nearby woman fulfilling this criteria is the beautiful Ms. Sein (season one Jennifer Aniston, seasons two through seven Kirsten Dunst), a naive French kindergarten teacher who also enjoys fragging n00bs. This will play an important role later on when the main characters must fight each other at French breakdancing. Okay, sounds unrelated. Just trust me on this one though.

After the show ended, the Fat Uncle ate the youngest kid. Over and over again.

This is the story all about when,
I changed my home location again,
So I'd like to take a moment just sittin' right there,
To tell you how I married a chick with underarm hair.

In a Bel-air Mansion I'd sit and grimace,
'Cause the television viewers had grown sick of this premise,
I needed a fresh spin to regain my audience,
So I moved in with my other uncle out in France.

I whistled for a plane, but it didn't respond,
It seems you need a boarding pass to get on,
So I went to the airport and I waited in line,
Twenty-two hours later I was sippin' on French wine.

then some background music

The house in which The Fresh Prince spends most of his days smelled like shit and body odor. One day, it got so bad that all the hostages attending the show suffocated and died. The bodies were dumped in a little village called Jonestown The house always denied these accusations, although while appearing on the Oprah show, Le French Prince said that maybe there was some kind of connection. The Fat Uncle wrote a book on the tragedy and later introduced his new "Pillowing Mounds Of Mashed Potatoes", which is made exclusively for House Harkonnen Food Products, Inc. They also make spittle cups.

All seasons have been released on VHS, because DVD's are not old enough, not one copy has been sold to date.(Except the one Your Lonely Mom bought.) (Note I said ONE.)