From Uncyclopedia, the content-free encyclopedia
Jump to navigation Jump to search
Kirsten Dunst 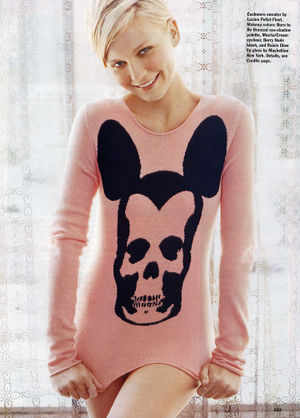 Kirsten Dunst shown during her celebrated Disney/Deathtrip phase
“I think Spiderman should die in the next movie.”

“No way! Make the screenwriters die in the next movie!”

~ Spiderman on Kirsten Dunst on Spiderman

“I would do her body good”

Kirsten Caroline Dunst (born April 30, 1982), who has gained fame in the Spiderman films and in many other starring role, is called by some "the hottest woman to ever live". They seem to like her cuteness and her manner. Or they just have to leave the house and meet the woman next door, which is what Spiderman did. This article is written from the point of view of such a loser. Please proceed: 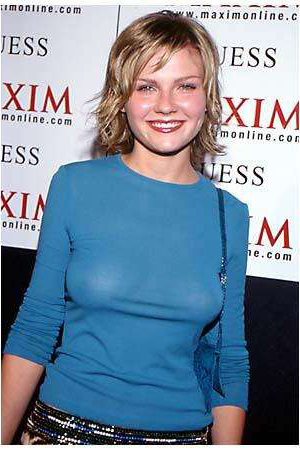 Kirsten dunst, on her bi-monthly trip to Sweden.

It is said that Dunst is both a slut and a virgin. This is either because she is simply too hot to have sex with, or because she chain-smokes and has really, really bad breath. Uncyclopedia prefers the former. It is written that, yea, if a man dare toucheth said temptress, his penis will expandeth to 78.141592654 times its normal size and then his head will explodeth. The only man to ever survive having sex with Kirsten is Chuck Norris, whose penis grew so long afterwards that it stretched from here to the moon and back (it is rumoured that Oscar Wilde could do the same, although unproved, as he himself claims “She’s not my type.” He is lying, and is just too afraid to ask her out). Mr T later rectified Chuck’s victory with a time machine so that he could “Take Kirsten’s virginity myself.” He later tried, only to have his head explode. Most women also cannot have sex with Dunst. Jennifer Aniston once tried, but her clitoris expanded to the size of a blue whale and she winked out of existence. With Jessica Alba, the opposite would happen. If anyone has to touch her in any of her films, they wear 3 inch thick steel gloves that are edited out in post.

In a battle of hotness, Dunst beat Paris Hilton 10 – 1. This meant that Dunst got to keep Paris as a sex slave. Due to her inability to do it, she keeps Paris chained up by a sex collar in her basement with a pineapple shoved up her ass and forces her to masturbate herself to her own sex video, using a jackhammer with a fire extinguisher attached to the end. Paris must achieve orgasm/vaginal bleeding every ten seconds, or else a garbage truck filled with semen and poop will empty onto her and she must eat her way out. If she falls asleep or passes out from exhaustion, a genetically modified giant carrot will be deepthroated into her and her titties will be whipped and spanked by Dunst fanboys wearing pink-and-black lacey g-string thongs (that have ridden ten inches up their asses) until her nipples swell up to the size of watermelons. Then feathers will be stuck up her (now clenched) butt-hole around the pineapple, which she will be forced to bend over and lick out (for every one of the feathers licked out, one of the aforementioned Dunct fanboys gets to replace it with his microdick and go to town humping. Any fanboys who hump for over ten hours straight are allowed to lick the sole of one of Dunst's stiletto thighhigh boots - the ultimate honour - before he then goes back to jerking off into the garbage truck with a string of orange sized anal beads stuffed up his ass, that are plucked out one by one by the fanboy next to him, using only his teeth). Conclusion: the writer of this article is twisted, or Kirsten Dunst has a really large basement.

It was intended for her to appear in a sequel to Keira Knightley In A White Corset And Kate Beckinsale In A Black One, with Dunst wearing a pink one. The film was scrapped after the crew died and were replaced seventeen times during filming. The girls then got bored and made out (causing the deaths of Knightley and Beckinsale).