From Uncyclopedia, the content-free encyclopedia
(Redirected from Jackhammer)
Jump to navigation Jump to search

“When all you have is a hammer, everything else looks like it needs a good solid whack in the head with a hammer.”

A hammer is a tool consisting of a long wooden handle attached to a shaped chunk of metal, that is capable of solving all problems. The chunk of metal is specially designed to perform the hammer's most important functions:

The hammer is exceedingly good at its job. 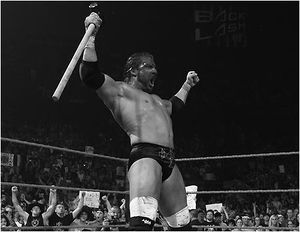 Triple H knows how to use sledgehammers, and you can too, with his special 99 disc DVD set "Triple H's techniques to using a sledgehammer to its fullest".

A hammer is best wielded with a firm two-hand grip, dominant hand on top. Of course, if you feel the urge to hook the eye-gouging apparatus around two fingers and swing it wildly in all directions, with the hammer held tenuously in your hand by the power of centripetal force alone, feel free. No one will stop you. Indeed, everyone will be too afraid to stop you.

The proper way to handle a hammer varies depending on how the user wishes to operate it. Here is a simple guide:

Swing the hammer high above your head, scream maniacally, then forcefully slam the blunt end of the hammer down upon your intended target with every fiber of your being. Hernias are a possibility for heavier Norse hammers.

For maximum damage, strike the target squarely on top of the head. Squeamish users may want to steel themselves for the resulting spray of blood and gray matter. The well-trained will often try the Norse God approach and throw the hammer viciously at the opponent. Though effective and fun to watch, it is very difficult for even the veteran hammers user to have the hammer come back to them. 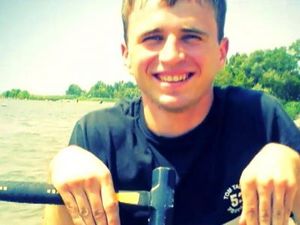 The godfather of hammer wielding. Watch and learn in amazement.

Direct the sharp "prongs" of the hammer into either of the target's eye sockets. Careful aim is needed in order to successfully gouge out the eye, rather than cause a simple puncture wound or compound fracture. The optimal point of entry for the hammer is just between the target's eye and eyebrow -- aiming down, of course. Ambitious practitioners can try for the more challenging "underhand" eye-gouge maneuver, in which the hammer is swung down behind the user and then back up, under the target's eye.

Do not be disappointed if the eye fails to exit its socket on your first try. The purpose of the attack is to blind and maim the subject; freeing the eye itself is merely a flourish of sorts. Another unrealistic expectation is hoping to see the eyeball burst. This rarely occurs, since the eyeball is very tough in construction.

~ Oscar Wilde on Bursting someone's eye with a hammer

Some tips to keep in mind while using a hammer.

There are those who would abuse the noble, maiming power of the hammer for more mundane ends, i.e., home repair or basic construction. Why someone would want to waste the power of such a beautifully destructive weapon on something so banal is difficult to understand, but it persists nonetheless. Hammer connoisseurs, however, may take pleasure in the knowledge that those who misuse the hammer often hit their thumbs when trying to pound in a nail. For those who've never experienced this type of accident, it really, really, really hurts. A lot.

The Life-Cycle of a Hammer 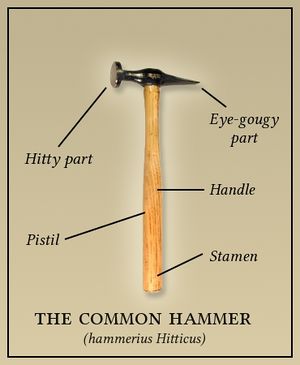 Anatomy of the common hammer

Contrary to popular belief, hammers are living things that deserve our love and respect, quite unlike those destined to receive its awesome destructive power.

The hammer's scientific name is Hammerius hitticus, which is obviously a bland and misguided attempt to write something hammer-related in a vaguely Latinate manner.

Hammers are the end result of the combination of many diverse genetic materials, mainly that of trees and metallic deposits. The mating cycle begins when two people get into a hammer fight. During the vicious ritual, the genetic material contained in the hammers' pistils and stamen (see illustration) are mixed together and then fall to the soil. These bits of DNA combine with the blood of the victims to form the seeds of new trees and veins of metal deep underground.

Once the trees and metals have formed, they are harvested by human workers. The genetic information is then spliced together in the glorious love shack that is a hammer factory. The end product is then shipped out to bloodthirsty, hammer-fighting maniacs around the world. Thus the Bloody Circle of Life is begun anew.

Hammers have been selectively bred for a variety of military applications. It would be unwise to attempt a conclusive list of hammers. However, a few notable varieties are worth mentioning. 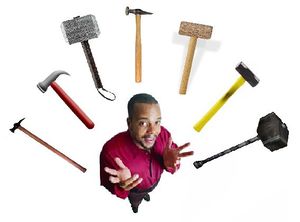 The world of hammers is a rich and exciting place for the ultra-violent to explore. There are:

There are also an almost infinite variety of hammer types, styles, attacks, and criminal statutes to immerse yourself in. And it is so easy to take part. Simply pick up a hammer and pound anything that moves. It's fun, educational, and a great way to test the limits of the self-defense clause. Happy hammering!

NOTE: The content of this article is in no way related to MC Hammer