From Uncyclopedia, the content-free encyclopedia
(Redirected from Kate Beckinsale)
Jump to navigation Jump to search

The film was titled according to the 2005 Hollywood Truth In Titling regulations. God only knows how, but it got a 12/PG-13 rating. 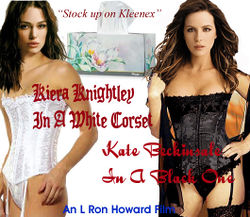 The poster depicts the girls dressing for bed. Such nice girls. Although they could get cold in those outfits. They should get under the sheets together quickly ... to stay warm.

The film was put together by director L. Ron Howard:

I picture a film, right? A chick flick about two gal pals of good moral upbringing who bond through their patriotic duty to Queen and country. A heartwarming emotional coming-of-age feel-good family summer spy action blockbuster, with English lead actresses. It'll star Keira Knightley and Kate Beckinsale, right? Keira should wear a white corset and Kate should wear a black one, right?

If only I could think of a catchy title ...

We see Keira (played by Knightley) and Kate (played by Beckinsale) walk towards each other, dressed in corsetry, weapons drawn.

Flashback to Keira and Kate as companions at Catholic boarding school. Catfighting in full school uniform. Harsh nuns, cold shared dormitories, snuggling together for warmth at night in very worn nightdresses, one white and one black.

Back to fast-cut fight scene. About four minutes of quick closeups, with feminine exertion noises.

Back to the present. Long hand-to-hand combat scene with deep emotional conversation.

Flashback to the girls running around doing action-movie spy stuff in their corsets, spiky boots with lots of buckles, fitted flowing leather coats, etcetera, and exchanging long smouldering looks (because, of course, they are the best of gal-pal friends).

Flashback, again, to a betrayal. This involves Male Lead (played by no-one you can remember; some 'Merkin beefcake) who is forced to silence Keira before his former girlfriend, Kate, reaches her. Or it could be the other way around. I'm not sure.

Present. The truth about what happened has been resolved - Keira agrees that Kate was right all along that Janseist theology was superior to Jesuit. The girls throw down their swords in emotional climax (so to speak). They re-befriend each other and drive back to the big city. Note, for that elusive 12 rating, that the girls making their camper van shake is due to them being ... emotional and shaking while hugging and crying. Yep, that's the ticket. Friends. Close friends, because they're Secret Agents together! Yay!

The girls are now great friends. Slow-dancing in corsets, to violins and candle-light. Note that the girls are just, er, roommates. Practicing their dancing. For unspecified future male suitors. Of course. They sleep in the same room, but have their own single bed each. So that's all right then.

Male Lead comes back from the agency and threatens their newfound domestic bliss flat sharing. The girls go forth to kick Male Lead ass.

End with the girls in skimpy designer bathing suits (Keira in white, Kate in black) on a sun-drenched beach, rubbing sunscreen on each others' backs. In a stilted Catholic schoolgirl manner, of course.

The cinematography centres on iterative attempts to discover how much cleavage you can get away with without being landed with a 15 rating. Hey, it worked for Pirates of the Caribbean. 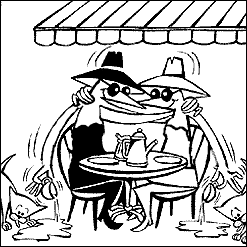 Kate (left) and Keira (right) in the intro scene. From the animated series based on the second film, Corset Vs Corset.

A sequel was produced in 2007, with the working title Keira Knightley In A White Corset And Kate Beckinsale In A Black One, On A Plane.

Keira and Kate are relaxing (as much as one can relax in a corset) and drinking tea in the mansion of one or the other's rich father. Bad guy minions arrive and riddle the mansion with automatic firearms before setting off an explosion that kills the father of whichever one is the host.

The girls dig themselves from the rubble. They have no visible scratches on them, although there are strategically-placed smudge marks where one might have expected actual injuries. Their hair is sufficiently mussed and tousled to look more like the outcome of throbbing babe-on-babe action than of being at the focal point of an explosion. The latter, of course, being definitely what happened. (12 rating!) Their clothes are torn and ragged, except for the corsets, which are clean and unmarred.

Vengeance is vowed and the ladies set about searching out the ones who sent the disposable minions after them. They look sexy and sultry as they do moves impossible with what they are wearing and leave an impressive body count.

The trail leads the girls to discover that the villainous masterminds are Helena Bonham Carter and Kate Winslet. Those two had set about to snuff Keira and Kate because there was no more room in the "I Can't Act But I'm English And Look Hot In A Corset" club.

A four-way chickfight ensues and involves all four getting drenched in water. The villainesses are dispatched and the heroines walk off screen arm in arm. Kate says to Keira, "Nice boots, by the way." They open their own business, designing corset-mounted weaponry. 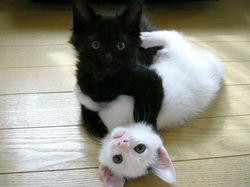 Keira and Kate have inspired fans around the world and across the species barrier.

A 4th film Corsets, Burqua's, Bondage and Domination, Kiera Knightley to come back as a beautiful Pashtun Jihadist called Shafina - she's totally covered up for most of the film but still does some great catfight scenes. Some remarkable other casting with Arnold Schwarzenegger as President of the United States, Kate Beckinsale as the British Prime Minister (in a corset) and Woody Allen plays a secret agent dropped behind the lines.

Most Keira Knightley In A White Corset And Kate Beckinsale In A Black One fanfic centres on the question of what colour corset the writer's Mary-Sue character is wearing (usually red), with digression into Catholic morals, ethics and philosophy for young women. None whatsoever revolves around lovingly and explicitly detailed hot babe-on-babe action, because these are 12-rated films. You sick little monkeys.