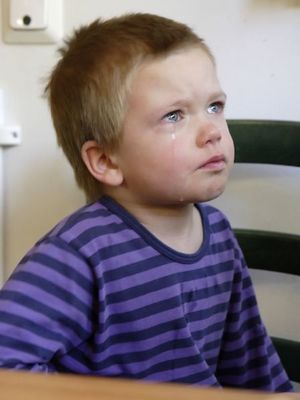 JONES, IN. -- Pete Blackberry (7) sobbed like the little brat he is today when his music teacher, Mr. Murgola (42) of 1523 West York Drive, Hoboken, New Jersey, who wishes to remain anonymous (5 ft. 11 inches, bald, pot-bellied, frequently seen in a trenchcoat at the neighborhood park watching the children with his hands not visible), reportedly called his attempts at playing the recorder "a fucking disgrace". He continued by stating: "No wonder your mother put you in that god damn orphanage, you worthless weed." Frank then proceeded to break the recorder which the boy had borrowed for the lesson in half and shouted: "That was a fucking antique, but you went and spoiled it." It was at that time that Pete started pissing through his eyes.

"You'd think that with the amount of liquid Whatshisname loses with crying, he'd dehydrate and die." commented Laura Jones (62), Pete's foster parent, "But sadly, that's not the case." Pete Blackberry is known for sobbing for no apparent reason. Just one day before the recorder incident Pete sobbed because he was threatened with castration. Even though the threat was very real, just like the knife, crying about it seems like a pathetically girly reaction.

"He's depressed all the time, and we don't have a clue why." explains Bloke Keen (16), his foster brother. "We don't know why he doesn't just commit suicide. We're leaving him hints all the time. We hang a noose here, we leave a loaded gun there, but he seems to be completely oblivious. It makes me mad. In fact, I'm going to choke him right after we're done here." Bloke did indeed go and choke his foster brother after we talked. After he regained consciousness, Pete, not surprisingly, cried once again.

Social worker Mary Flute (35) found Pete's habit to be a conundrum as well. "I don't know what it is. They must be pumping him full of estrogen or something. It's irritating, that's what. And ever since Brokeback Mountain hit we can't use the 'cowboys don't cry' expression anymore. I have far too much on my 'to do list' to go around comforting pansy boys."

It seems as though this kind of behavior is growing at an alarming rate amongst children around the world. "We have to do something quick, before this kind of thing is labeled as emotionally healthy." comments Ban Ki-moon, UN Secretary General. "This, however, leaves us with quite the enigma... What can we do, how will we do it and will our kids cry because we are doing it?"