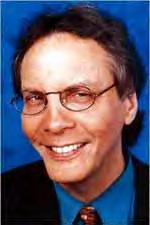 NEW YORK, NY - Behind the scenes of the television show Hannity and Colmes, former human mannequin and alleged standup comic Alan Colmes, whom Fox News bills as “Sean Hannity’s bitter half,” is envious of his partner’s success. Hannity, the conservative on the show, is much better looking, is more articulate, and debates better than Colmes, the show’s viewers say, and Hannity has been able to parlay these qualities into a separate show, starring him exclusively, known as Hannity’s America.

Told of Colmes’ envy, Hannity told Unnews’ reporter Lotta Lies, “It’s understandable. When I look into a mirror or hear my own voice, I’m almost envious of me myself.” However, his personal magnetism is only part of the reason for his success, Hannity claims. “It’s all about ratings,” he declares. “I get them; Alan doesn’t.”

If Colmes were able to garner as many rating points as his co-star, he’d have a shot of a show of his own, Fox News owner Rupert Murdock says, “but no one likes Alan, and liberalism, despite the Democrats’ recent victories, is on the decline in America.”

Colmes disagrees. He says he is being discriminated against because of his political stances on the issues of the day that are debated on Hannity and Colmes. “The ratings aren’t divided along political lines,” he contends. “It’s the show, not Hannity and me that gets rated.” 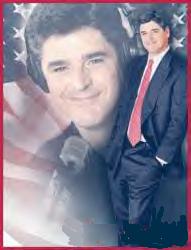 “He’s wrong on the president, he’s wrong on Iraq, he’s wrong on Hillary and Obama, and he’s wrong on this, too,” Hannity says. “That’s why Alan doesn’t get a show of his own. Even on our show, I carry him. Without me, he’s nothing. And, whether he likes it or not, it is about the ratings.”

Hannity also accused Colmes of marrying Dr. Jocelyn Crowley in a desperate attempt to make himself more sympathetic and likeable to viewers. “For a while there, because of his support for gays and gay rights, viewers were beginning to think that Alan was homosexual. His marriage hasn’t put an end to such rumors, but it has taken the wind out of them. In addition, his being married makes him seem less like a monster and a little more manly.”

Colmes has tried to state his position on the show, on ratings, on Hannity, on liberalism, and on a variety of other topics in his book, Why I’m Black and Blue: The Left is Right and the Right is Wrong and Other Puns. The book was published in October 2003 and has sold four copies: one to each of Alan’s parents, Louis and Fay Colmes (yes, he does have parents); a third to his wife; and a fourth to himself. According to Colmes, more would have sold except that there is “a vast right-wing conservative conspiracy” at work behind the scenes at Barnes & Noble, Borders, Books A Million, and other major bookstore chains. “They put my books on the bottom shelf, spines out, while Hannity’s books all face to the front, showing their covers and Hannity’s smiling, ugly face.”

Colmes refers to himself as a “straw man for Hannity to demolish” and as a “foil” whose contrasting ignorance and stupidity are meant to highlight his partner’s knowledge and brilliance. “Without me, Hannity would be lackluster and dull, so it’s not him, but me, who is responsible for the ratings. I deserve my own show.”

Besides, Colmes argues, seeming to contradict himself, “TV ratings are like political polls. They change all the time, and one who has honor pays them no mind, but persists in doing the right thing, just as President Clinton did and George Bush never will do.”

Hannity says, “His interpretation is always uniquely his own.”

Asked for her take on Colmes, Barbara Walters, a once-respected journalist and current sparring partner with Rosie O'Donnell said, “That poor, pathetic man.”