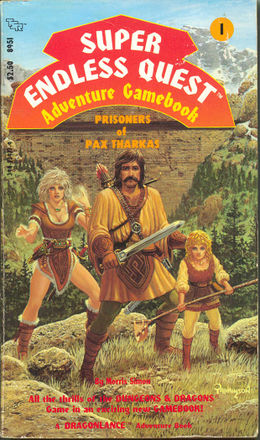 Grey hair or midget? YOU decide!

Welcome, to an encyclopedia article unlike any other! Whereas in most encyclopedias, you read the article from beginning to end, in this article YOU get to decide what happens! Simply click on the link at the end of each section to indicate your choice, and proceed to the next section. But be warned! The article is a dangerous place, filled with half-baked concepts and contrived scenarios. To survive, you will need to have your wits about you, as making the wrong move could spell your doom, and it will be game over. Or you could just go back a step. But that would be naughty.

It is 1993. You are a precocious, introverted eleven year old boy with square glasses. Your mother has given you a tatty, second-hand copy of Warlock of the Citadel of Doom by Peter Jackson and Ken Livingstone in an effort to shut you up during a rainy Sunday afternoon. Your father is busy watching the football, and your older brother is preparing to go to his fascist rally. Your little sister is around somewhere. Despite the adventure gamebook coming from a second hand shop, you have nothing better to do. In order to begin, you will need a pencil, an eraser and two dice. Your first task is to find a pencil.

Playing to your brother's prejudices, you explain you're inventing a boardgame based on the Nazi invasion of the Soviet Union, and that you need the dice to test it out. He replies that that is just the sort of tragic thing he'd expect of you, but he approves of the subject matter. He also wants to see it later. He gives you a pair of dice covered in swastikaz. Success - assuming he doesn't find out you were lying to him. Now you're ready to play the gamebook. But just as you head to your room to start playing, your little sister appears, and asks you what you're doing.

She dashes off with your gamebook, delighted at the trouble she's causing. You're faster than her, but she's smaller and more maneuverable. She manages to reach the toilet, and locks the door. Your efforts to reason with her are to no avail, and you hear the sound of a toilet flushing. You've lost the gamebook. But you'll get her when she comes out. You spend the rest of the afternoon camped outside, waiting. 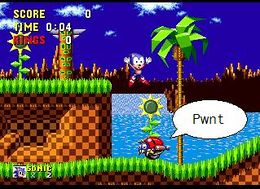 On your way home, you get run over by a vaguely beetle-shaped car.

You trudge through the pouring rain, anticipating the awesome speed and lush graphics of the Green Hill Zone. You hadn't phoned your friend in advance since your parents won't let you use the telephone. Upon arriving at your friend's house, his mother informs you that he is the chicken pox, and can't see anyone because he is blind, and that you're a bad influence on him anyway. As you walk away, you see him sitting up, playing his Sega, not looking ill at all.

You get in a traffic accident on your way home, and die.

Your brother is looking sharp in his leather jacket and freshly shaved head. His room is filled with fascist memorabilia, including a pair of socks once worn by Heinrich Himmler. As you knock on his door, he turns around and asks you what you want, you little shit. Mumbling slightly, you ask if he's got any dice you can borrow. Laughing, and not in a nice way, he puts down his Nazi battle flag, and asks you what you want the dice for.

As you grab the sword, you inadvertently release a plague of monsters upon the land, resulting in you being banished from your home village and being teamed up with an attractive spellcasting young woman. Together you travel the world, fighting monsters and gaining levels, before finally destroying your arch nemesis and saving the universe.

With his team losing, asking your father for an eraser is the straw that breaks the camel's back. Plus, he's very drunk. Grabbing you, he decides to turn you into a real man. Thrusting a can of beer into your hands, he commands you to start drinking. The warm, sour liquid brings tears to your eyes, and within a few cans, you become completely wasted. You spend the rest of the day staggering about and puking, with your gamebook completely forgotten. 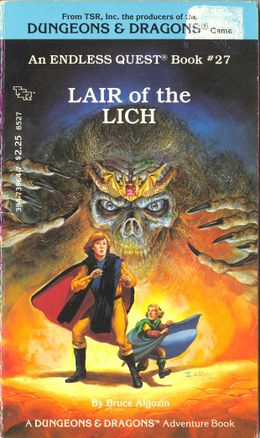 The two hundred foot skeleton is not badly hurt by your flaming fart spell. If you want to turn your eyelids inside out, go to 48. If you want to make your elbows go all funny, go to 57.

Entering the TV room, the scent of fresh beer enters your nostrils. An overweight middle-aged man sits on his ass-groove in the sofa, watching the football game. You're not sure, but you think his team isn't winning. Around him, the floor is scattered with beer cans and food containers. You've never liked sports, despite his best efforts, and he's already written you off as a bender. Growling, he asks you what you want.

You struggle vainly against the ropes, but they have been tied with great skill, and the knots are as hard as iron. Your stomach jumps into your mouth and your bowels jump into your underwear as you hear the sound of an approaching train. As you pray desperately for a miracle, you sickeningly realise that this is the end. The Welsh bandits have claimed another victim.

Your brother's expression flickers momentarily, and he asks you to see the gamebook. As you raise it to up to him, he snatches it out of your feeble grasp and reads out random sections in a sarcastic voice, whilst simultaneously holding you down with one tatooed arm. When he's finished humiliating you, he chucks the book in his bin and throws you out of his room, saying he'll smash your head in if you bother him again, you geeky little bastard.

The garage is filled with broken garden equipment and old Christmas trees, but you remember seeing an eraser in here once. Years ago. In the cobwebs, your father's motorcycle lies shrouded and rusting, untouched for years despite his saying every month or so that he'll fix it up. Rooting around in the remains of a never-used barbecue, you come across a mangled fragment of pencil, still with its eraser-head attached. Success! All you need now is a pair of dice. And possibly a tetanus inoculation.

As you explain about your gamebook in a boring way, hoping she'll become disinterested, she quickly snatches it from your grasp! Laughing and giggling wildly, she runs away with it. You have only seconds to make your decision.

The air is thick with city smog as you scramble across the rooftops away from the robot ninja assassins. You are moving as fast as you can, but they are faster, catching up with you little by little, as you slowly tire. Leaping between buildings, a poisoned shuriken catches you in the left buttock, causing you to stumble and fall helplessly like a ragdoll to the streets below. 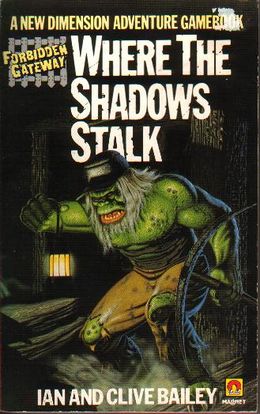 It's the Hulk's redneck brother!

Pushing her to one side, you tell her to piss off and mind her own business. Big mistake! She's now more interested in your gamebook than ever, and she starts screaming at the top of her voice that you've been hitting her, getting the attention of your mother and father. Your brother, thank God, has already left the house. The dispute quickly escalates, with your mother and father getting involved, mostly on your sister's side. With a poisoned atmosphere, the afternoon is ruined, and your gamebook has been confiscated.

Your family isn't very wealthy, and consequently has a large selection of board games. But none of the good ones, like Monopoly. Rummaging through the selection, you eventually manage to find two grossly dissimilar dice, one from Find the Big Mac and the other from Mr T's Game of Milk. Your brother has drawn big comedy lips on Mr T. Now you're ready to play the gamebook. But just as you head to your room to start playing, your little sister appears, and asks you what you're doing.

Your mother's eye glaze over as you approach, as she expects you to start talking about a topic she knows nothing about, like astronomy or dinosaurs. Already regretting her decision to give you the book, she hands you a stubby, blunt pencil shorter than your pinky and tells you to get out of her sight. You slink away with your prize. Now you need to find an eraser.

Your father is surprised to see you settling down to watch the game, since you've never taken an interest in football before. Your presence is clearly making him uncomfortable, helped by the fact that his team is losing by its biggest margin in years. A few minutes pass, and making an excuse about a headache, he stumbles off for a lie down. Once he leaves, you are amazed to see a good quality eraser sitting in your dad's now vacant ass-groove. It's still warm. Now you need to find a pair of dice.

As you rub the lamp, a strange whizzing sound can be heard. Suddenly, a genie with long, foppish hair appears, and offers to grant your one wish, as long as that wish is phrased in the form of a quotation from a well-known sayer of quotes.

To wish for "Biography lends to death a new terror", turn to 28.

To wish for "Fashion is a form of ugliness so intolerable that we have to alter it every six months", turn to 35.

You rummage through your school stuff, looking for the pencil you found in the school toilets last week. But it doesn't seem to be here. Then you remember you stuck it under your desk on Friday with chewing gum, wondering if it would last the weekend. Bad luck! But just as you turn to leave, something catches your eye from your box of Legos. It's an old blue pencil. Great! Now you need to find an eraser.

Thinking fast, you grab one of your sister's My Little Ponies and threaten to pull its stupid head off unless she returns the gamebook. This stops her in her tracks. A prolonged period of negotiation follows, in which you impress upon her the greater value of your hostage compared to hers. Eventually, you manage to set up an exchange, and you snatch your gamebook back and give your sister back her toy. She's not very happy when she realizes that you've kept the pony comb as collateral. Congratulations, you've just outwitted a seven-year old girl.

Whoops! This page is missing. You'll have to go back.

As you open the book, you suddenly realize that the previous owner has already written all over the scoresheet and inventory. In pen. The fucker.

Featured Article  (read another featured article)
Featured version: 7 June 2006
This article has been featured on the front page. — You can nominate your favourite articles at Uncyclopedia:VFH.