From Uncyclopedia, the content-free encyclopedia
(Redirected from UN:POOP)
Jump to navigation Jump to search

Hi there! Pull up a chair. No, not that one, somebody left some vanity stains on it. Oh, and that one's full of street sweepings from someone's article about their town. Maybe you'd better just stand.

Anyway, welcome to the Poopsmith's Lounge, otherwise known as the overspill car park for VFD. This is the place for those non-VFD-regulars who don't care about the whole voting malarky to let us know about stuff that we should probably get rid of. I'd offer you a cup of Tea, but I think the teabags are under that pile of articles about people's teachers, so maybe you should just dump your deliveries and leave. 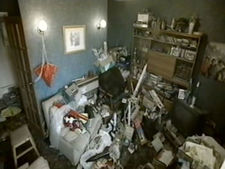 That's all! Thanks for your help in the fight against the unfunny!

Add new articles at the top of the relevant section. Do not remove anything without asking Sir Peasewhizz, Frosty or Nikau first.

Stuff to be added soon[edit]

Weeks beginning when I created them[edit]

I'm hatin' on your template, not your article, but I love you. What kind screw do you have in mind? As you may know Jesus is (on the whole) a heterosexual kinda dude, so I assume we are talking about the threaded kind? I must admit I do prefer screws to nails. JFC 20:37. May 19

Then that I would approve of. If it actually did that, but I think this template as it is now is a list of users who happened to have been left there by the last person to edit that template. We need something better than this so we can see which users actively use Uncyclopedia! Also, I think not everyone who might find it in mainspace would understand what it was and how it was created and what it actually meant. If a user want's to find a list of active users they can look at Special:RecentChanges right? With the right settings to trim how your view RC, and some advice about how to view that information from the right person people could actually see which users actively are using Uncyclopedia now. Am I wrong? JFC 20:51. May 19

Firstly, the automated list of active users is at Special:ActiveUsers. Secondly, I thought historical pages had to be revived by a village dump vote. Thirdly, we appear to have no active poopsmiths at all because the first one is inactive and the other ones are admins, and I have no idea what to do about that. Fourthly, iced fries. – Llwy-ar-lawr (talk • contribs • logs) 21:11, 19 May 2014Uncyclopedia is a community site that anyone can contribute to. Discover, share and add your knowledge! UncyclopediaUncyclopediaIllogicopediai:fr:LogimalpediePaudurapedyjaFrithchiclipeidUncapaediaAbsurdopediaScotypedia

Firstly, that automated list of active users list we have at Special:ActiveUsers is poop. Those users are not "active". users who edited once or so in 30 days? I want to know who is online now, or has been in the last few days or so, and what they were up to. How long ago within 30 days? Man you try 30 days in the desert. There aint nobody left. I want better for Uncyc. Secondly, I know nothing of this "rule" about needing a vote in a dump, especially considering this is poop. It sounds like a poop rule, not a dump rule to me. Actually it's not a rule. Because if it was, it would be on UN:R. Which it is not, but then I'm not admin, and you are, so if I have not followed procedures correctly, then you can revert me, and ban me if I revert your edits. :P Which obviously I would not do because even Jesus does not like getting banned. Obviously. :) It's all all good. ... What I did was I changed things to be how I thought they should be. It's all all good. So it's up to you... Thirdly you could get some. If you wanted them. I think you want them. Fourthly agreed. JFC 21:50. May 19

They poop. Or more specifically they carry poop from one place to another. Sometimes. Check the Archived Lounge Reports below for previous poopsmithery. JFC 21:50. May 19

Firstly, this extension creates a special page where you can see the users and ips who are online at any given moment - do you think that would be useful? Secondly, I was just quoting {{historical}}. That's all I know about the proper procedure here. The main reason I'm uneasy about reviving the poopsmith's lounge is that I don't entirely understand its purpose and I don't like being confronted with admin-type stuff that I don't understand because then I am faced with the possibility of having to make a decision about it, and I hate decisions enough as it is without also having to make them based on squishy slime rather than solid chocolate-chip information. As you said, though, it's not a real rule, it's a guideline, or perhaps a poop line. Thirdly, I don't know what I want because vfd is kept pretty clean by the admins. Especially me for some reason. – Llwy-ar-lawr (talk • contribs • logs) 01:43, 20 May 2014Uncyclopedia is a community site that anyone can contribute to. Discover, share and add your knowledge! UncyclopediaUncyclopediaIllogicopediai:fr:LogimalpediePaudurapedyjaFrithchiclipeidUncapaediaAbsurdopediaScotypedia

That extension or something like it looks like it could be very, very useful if used in the correct way for the right thing, maybe that combined with a list of VERY recent users, I don't think just logged in is enough. If we can know something about what they are doing also, that would be awesome. As for not needing the poopsmiths lounge... It's main purpose is that it act's like a Babylonian mystery school attracting new members to the Uncyclopeda cabal. A fresh flow of new blood sacrifice is required in order for Uncyclopedia to prosper. The wheels of life must turn. Also, and seriously... There is no place for new users to nominate articles. There should be. The lounge met that function perfectly IMO. JFC 01:57. May 20
Oh, and RE: "faced with the possibility of having to make a decision about it". Something you may, or may not know, but now you do: On Uncyclopedia all admins regardless of sysop, crat or whatever are exactly the same and have the same actual power, and say in all events and decisions. Crat's actually have the physical ability to add and remove sysop, but they can not do that unilaterally. If a crat did, they would be a dick. But I'm sure you knew that. :) JFC 02:13. May 20