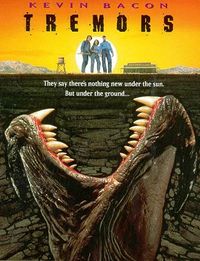 The Creation Museum is going to have a tough time explaining this one...

Tremors is a historical documentary detailing the mysterious events that occurred in Perfection, Nevada in 1987. It stars several[1] degrees of Kevin Bacon, superstar Fred Ward, country music diva Reba McEntire, and the Dad from Family Ties.

The movie documents the harrowing story of an isolated mountain town being plagued by huge carnivorous worm-things that are totally pissed off about something.[2] The origin of the monsters is never mentioned or discussed in the movie (see Controversy), but it is covered extensively in the sequels and prequels of the film (see Sequels). The film enjoyed only moderate success in theaters, but gained a cult following after its release on home video.[3]

The film opens with several scenes of "suggested violence", where it is implied that violence occurred despite it not being shown on the screen. This technique was later heavily used in such classic films as JAWS and Independence Day. In Tremors, several goats disappear in rapid succession, implying that some sort of sinister force is at work. Several other inanimate objects and farm animals subsequently disappear into the ground, further confusing viewers who hadn't seen the movie poster yet. This strange activity is first noticed by Val and Earl (played by Bacon and Ward), two hicks rural people, whose attempts to flee the valley are quashed when they meet the impassible barrier that is "several rocks stacked on a roadway". The film then has its least believable moment with the use of 'attractive' and 'geologist' in the same sentence during the introduction of the token love interest, Rhonda. After a bit of forced awkward interaction, one of the strange monsters conveniently wanders by.

The trio quickly dispatch of the first graboid using a combination of tae bo and Raid. Yet they then discover that there are several more hungry monsters roaming the now-goatless valley. The three return to the general store and meet several other minor characters who are quickly eaten. They use a radio to make a plea to Burt, an NRA nut hunkering down for doomsday in his underground sex lair. An interesting fact is that the appearance of Reba McEntire was not a cameo; she actually just kept wandering onto the set of the movie with large firearms, threatening to shoot people and demanding to speak to Avril Lavigne. At this point Burt's basement is infiltrated by one of the worms. He manages to kill it using his guns and a few well-timed your mom jokes, with help from John Wilkes Booth, Lee Harvey Oswald, and the guy that shot Caesar.

After several graphic scenes in which puppies and small children are eaten, Rhonda distracts one of the beasts by taking her pants off, allowing the men to kick back, have a beer, and enjoy a pantsless Rhonda. Burt finally kills the creature using his patented Stone Cold Stunner, which Steve Austin stole from him in 1984 before using his time machine to return to 1776 and invent Texas. Anyway, with only one monster left, our hero Kevin Bacon uses bombs made of Skittles and copies of 'Gigli' on DVD to lure it to a cliff. The surviving people use their remaining limbs to set up an elaborate speaker system, over which they broadcast Barbara Streisand music. This drives the graboid to throw itself off of a 70,000 foot drop (an understandable reaction). Unfortunately, Reba McEntire accidentally took out her industrial strength earplugs before the recording stopped, and her head imploded, then exploded, then imploded again. She has since been resurrected as a robot in the form that we know and love her today.

Despite being riddled with plot holes and Clay Aiken jokes, the film has been given quixotically positive reviews. It was the first movie to be given three thumbs up by Roger Ebert, owing to the fact the it came out so soon after Ebert's first thumb addition surgery during his failed attempt to set the world record for 'Most Thumbs Had'. In 2000 the film was honored with the 'Greatest Movie Involving A Plot Where Rosie O'Donnell Is Responsible For More Than 75 Deaths' award, narrowly edging Independence Day, Jurassic Park, Citizen Kane, and the disqualified Ghostbusters (only 73 human deaths; 9 centaurs and 3 Olsen Twins not eligible as human).

Several people have voiced concern over the way the historical events are depicted in the film. These include "Where's Tom Hanks? I thought Tom Hanks was in this movie" and "This film depicts evolution as being not as totally gay as the scriptures tell us." Those upset by the film would be mollified if an alternate version of the film were produced, in which God created the graboids and they just happened to not come into contact with humans throughout the entirety of the Earth's history until God said so. However, this is impossible, as highly trained religious experts agree that God was, at the time of the events depicted, on vacation.

The moderate success of the film has spawned a totally disproportionate amount of sequels. A partial listing follows, since a full listing is impossible owing to the fact that most official sequels are just YouTube videos of people being eaten by graboids.

Tremors 2: Electric Boogaloo - The graboids are back, this time exploding into smaller non-worm beings with radar, sonar, infrared cameras, invisibility capabilities, and the political backing of Dick Cheney. However, they are defeated by a single Indian man using the power of his own tears.

Tremors 3: Back to the Valley - Huge flying graboids with obscenely large genitals plague Perfection valley. Plus, one of the cool Mexican dudes who survived the first two movies gets horribly eaten. You'd thin he'd have moved away after the second incident but no. This nonsense continues until Joey from Friends shows up to save the day using his own brand of low-brow humor. Oh, Joey, when will you learn?

NOTE: All copies of Tremors 4,5, and 6 were damaged in the second coming of our lord Jesus

Tremors 7: The Graboids go To Paris - The creatures have mutated again, this time following in the footsteps of Kevin Federline and relocating to France. Kevin Bacon reprises his role as a redneck lowlife, this time using his invisibility to begin to destroy the graboids. However, he stops after a while, noting that if he's lucky the monsters may just eat enough croissants to result in every French person starving to death.

Tremors 8: Roommates - The Tremors series takes a turn to the lighter side when young Dennis Cummings Jr arrives to his first day of college to find that his roommate is, in fact, a graboid. Hilarity ensues. Despite their differences the graboid and Dennis soon become friends (through the magic of a musical montage). Unfortunately, society is not as accepting of interspecies hanging out, and the graboid is killed by bandidos. The film has definite undertones of the racism that is still plaguing our society. Paul Haggis remarked that it heavily influenced his first script draft of Crash.