From Uncyclopedia, the content-free encyclopedia
Jump to navigation Jump to search
“We stole "The Scientist" from her.” 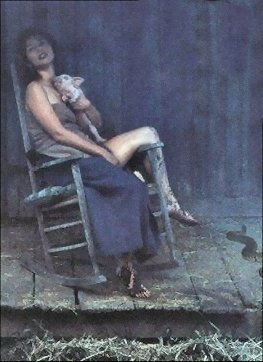 Tori Amos (born Myra Ellen Amos; August 22, 1963) is a widely-underestimated mystic she-demon in the guise of an American singer-songwriter. She embeds subliminal messages in the sound waves of her songs as they appear in CD or mp3 format, brainwashing all who listen intently on a subconscious level. The resulting brainwashed individuals call themselves Toriphiles, Topiaries or even Fifi Trixibelle. The air at a Tori Amos concert typically contains addictive substances to further engender loyalty among cultleader Amos's subjects.

Sample statement by a member of the Tori-cult: "The absolute best singer/pianist/songwriter/composer who has ever lived. She is the creator of soon to be eleven studio albums and many more songs as additions to her singles. Tori Amos is a provocative performer. She has inspired her legions of fans to revolt against worthless music. Her covers of such songs as "'97 Bonnie and Clyde" and "Happiness is a Warm Gun" (remade as "Happiness is Certainly Not a Warm Penis") are often considered superior to the originals (by Eminem and The Beatles, respectively)."

The Start of Her Music Career[edit] 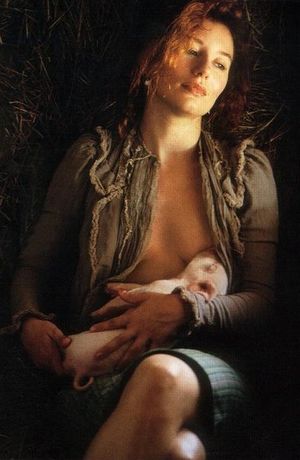 Tori breastfeeded a pig as a favor to a perverted record executive.

Tori Amos escaped the insane asylum her drug-pedaling father had put her in at the age of 21. In her new-found freedom she went to New York City to raise enough money to pay for a passport to Mars. She realised that Mars was still a third-world planet, so she instead joined a gang and viciously beat Sarah Jessica Parker for the leading role in a genital herpes commercial (because Tori could actually play the piano whereas Parker was just a showboating whore). After attending a concert, the gang decided they'll be a band, Y Kant Tori Poop, instead. Their debut album Y Kant Tori Poop was released in 1988. Tori expresses disgust for the album today but has performed various songs from the album in concert like "Cool on Your Exposed Poonanny". She is quoted as saying, "It was just a bad concept. I mean, how many songs can you write about not being able to poop? Even constipation has its artistic limits, you know?"

Tori Amos loves men. She is not a feminist, nor a man-hater. If she hated men, she would not have married one, nor sing about how she loves men. She helped organize RAINN, which has helped millions of people deal with their rape and abuse. She has sold over 12 million copies as of 2005. She has made something of herself, unlike you and your ridiculous ripped off version of Wikipedia.

After watching Yo Mamma-Mamma, Tori bought her now-famous piano, and made a maroon-music album called My Femaleness Makes Small Cracks in the Ground. It was a success, and Tori bought a house she named Ms. Indellen. 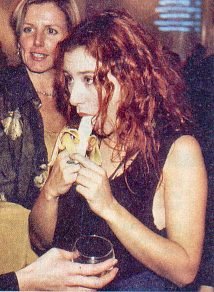 Trent Reznor has jerked off to this photo hundreds of times.

She eventually sought out the help Trent Reznor. She offered to eat 5,280 bananas while humming if only Trent would add some of her evil messages to Nine Inch Nails's next album. But nothing ever came out of this relationship because Tori realized that Trent is just using her as fetish fuel. She then rammed a nine-inch nail into his urethra and sold his body to vegetarians, fooling them into thinking that his body's a tofu replica of Satan.

After killing Trent Reznor, Tori made her second album, Crushed By the Pink. Later, she got dumped by her soulmate, so she decided to imitate Pele. Scientists call this event "The Tori disaster of '95". Later, a cryptic album called Pele Is Hungry, Therefore She Needs Men To Feast On suddenly appeared in record stores and laboratories everywhere. Critics claimed that Gravity's Rainbow in Greek would be easier to understand, but it became a fan favorite, and is even in Tumbling Rock's Top 10 albums of the 90's. Tori later revealed that it was Iceland that inspired her to create the album, not her break-up. While scientists have proven that the album does have Icelandic influences, the public still thinks that she's just covering up the fact that she was the dumpee instead of the dumper.

Tori's Life in the New Millennium[edit]

Tori decided that too many songs are sung by men, so she made an album called I'm Making a Political Statement By Covering Songs That Were Originally Performed By Men. She got streed cred and respect from around the world for being the only white woman to cover an Eminem song. Eminem replied to this by making a song about bashing women and wanting to degrade them in sexual ways. Tori reacted by turning him into an actual cracker. He was eaten by pigeons.

To keep CD promos for her album Scarlet's Fun Pornographic Tour of America from leaking when it was first given out in samplers, Tori gave out her CD samplers in a walkman which was held shut by a special type of glue she had invented which would make the CD player a splode like an acid bomb if it was pried open, disfiguring the person if not killing them outright.

After entering a bee farm without any protective gear, Tori discovered that bees want to penetrate women too. She later made an album about insect-related affairs called Bees Are Like Men; They Want to Penetrate You. The album spawned a hit single; a duet with Michael Jackson called "Sleep With Butterflies", which is about how butterflies make great lovers.

Tori was bored one night, so she watched a Chucky movie. She later had a dream about Chucky enslaving hundreds of Barbies and Tiffany-lookalikes. She came to the conclusion that Jesus wanted her to preach about how things like Chucky are corrupting children. Being a strong-willed woman, she refused to take orders from a man, even Jesus. She instead made another album called Chucky's Whores, in which she pretends to be five different dolls in Chucky's whorehouse. She documents the dolls' plan to run over Chucky with a big wheel while drinking whiskey. To promote the album, Tori bounced off clouds. She instead fell through them, and cracked every bone in her body. A man (of course), made lutefisk out of her body. Tori decided that she was takin' none of dat, so she made him do degrading things, like cleaning Madonna's vagina with his finger, then eating whatever comes out, all while she was still lutefisk. The Almighty Piano God changed Tori back to her MILF self, and she developed a sudden hatred of Norwegian people.

In 1994, Ms. Amos created the slang term icicle, which means getting off to Jesus. People everywhere admitted that they icicle all the time, and that's the only reason why they go to church. Later in 1998, Tori created a sex act called Raspberry Swirl, which is having sex with a woman on her period, then making a swirl with her menstrual blood and the man's semen. This act is very popular with vampires, but to everyone else, it just ruined fruit swirls for them.

In 2009, Tori created strong black vines. Contrary to what people believe, strong black vines aren't BSDM in any way, but are just used to whip bitches who won't shut up, like religious fanatics, crazy atheists, vegetarians, homophobes, and Kayne West. Scientists believe that these strong black vines are super-whips that'll be an essential tool in her future world domination. For now, sane people are taking precautions to avoid Tori for this very reason.

People believe that Tori also invented circumcision, but she denies it, claiming that the men she hates were already circumcised, and that intact penises are "softer".