From Uncyclopedia, the content-free encyclopedia
(Redirected from The Iron Curtain)
Jump to navigation Jump to search 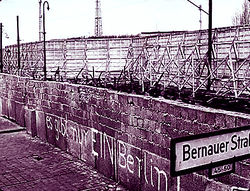 The Iron Curtain as it appeared to run through the center of Berlin.

For those without comedic tastes, the so-called experts at Wikipedia have an article about Iron Curtain.
“Either that Iron curtain goes, or I do!”

The Iron Curtain was a gigantically-long iron wall erected along the borders of the former Soviet Union following "The Great War" (World War II). In all it surrounded an area of 22.4 million square kilometers, which included one-sixth of the Earth's land surface. Compared to the Iron Curtain, China's "Great Wall" looks like the fence around George Bush's ranch. It was eventually brought down in 2002 thanks to the mysterious superhuman powers of illusionist and channeler of dark forces, David Blaine. Prior to that President Ronald Reagan hired magician David Copperfield to make the Iron Curtain disappear - but, alas, it was only an illusion. Regan, while simultaneously rattling his "Star Wars" sabre, saved up enough money and finally managed to purchase the entire wall for cash. He then tasked Blaine with the curtains removal. During its time the Iron Curtain came to symbolize the divide between the fortunate and the unfortunate. By the year 1964 the Iron Curtain reached the height of its unpopularity, but it took over four decades before the abomination was finally gone.

During World War II (Series 3 – Episode 2), Russian genocidal-maniac, Joseph Stalin ordered that all iron reserves in the Soviet Union be melted down (including military vehicles, railways and ocean-going vessels) in order that a giant curtain be forged and erected along it’s borders, principally to rid the USSR of crap weather, and transform the climate into that of a tropical paradise, where comrades could bask in the sun and relax under the shade of coconut trees.

Due to an essential design flaw, namely that it was made of 375 billion tonnes of iron, once built, the Soviets could find no way of opening such a large curtain and, thus, the Iron Curtain became a notable problem in terms of mobility. Since all ships were melted down in order to make the giant curtain, travel to and from the USSR became close to impossible for the republic’s population, and the Iron Curtain came to symbolize the repression of the Soviet people.

A further design flaw of the Iron Curtain was, rather than keeping out the bad weather, it blocked out much of the sun, making the region one of the coldest areas on earth. The cold subsequently became one of the two main contributing factors to the Cold War, the other being war. 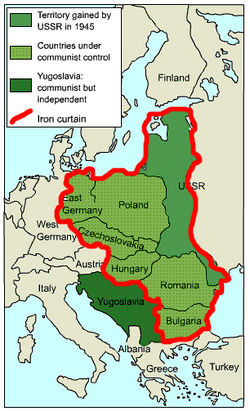 After watching a really good film starring Steve McQueen one night, the Soviets hit on the idea of digging an escape tunnel beneath the Iron Curtain, using regular household implements such as screwdrivers, forks and teaspoons, as depicted in the movie. This idea was quickly abandoned as it was found to be incredibly labor intensive, and the ‘firing farm animals out of catapults’ approach was resumed, largely because it was a lot more fun. In retrospect, the Russian government stated, “If only we’d thought of using shovels. We could’ve really been on to something there.“

The Iron Curtain was also the arch nemeses of Marvel Comics' Iron Man. After a falling out between the two during an episode of "The Iron Variety Hour" they proceeded to have several heated arguments, all ending in thumb wrestling matches. The Iron Curtain was clearly the winner of these bouts for he has the largest thumbs in Asia, a record 28 feet in diameter. In respite, Iron Man started a project to build his new "Thumb Armor" but the project was never completed prior to the curtains closing.

The Iron Curtain was finally brought down during the course of an internationally televised stunt performed by the illusionist, David Blaine. To further impress the captive audience of 250 million, he performed the trick after being encased in industrial-strength concrete, dipped in platinum, and dropped by helicopter into a nearby active volcano. In a subsequent interview given on international TV, President Boris Yeltsin commented, “Excuse me please. I would like to buy loaf of bread” with regard to the new renaissance made possible by the dark magical powers of Blane. It is thought he meant to say, “We, the Russian people, hail David Blaine as the liberator of our country and the father of a new freedom throughout the former Soviet Union.”

The famed event was a true blessing for the people of Russia, who were now once again able to travel freely between exotic countries such as Finland, Disneyland and Narnia. Sadly, Blane’s body was never recovered however, and he is currently believed to be battling the fearsome creatures of the underworld, until one day rising again to rid the world of poverty and anguish. 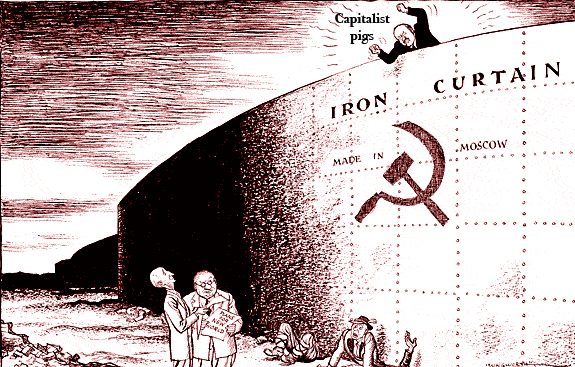 This is a disambiguation page.
Yes. You did just fuck everything up.
Retrieved from "http://en.uncyclopedia.co/w/index.php?title=Iron_Curtain&oldid=5940145"
Categories: