TEXT and their hidden messages, showing the world in flames.

Sound Is Compressed; Words Rebel And Hiss is the second track on the album Text by the experimental post-punk band TEXT. Most importantly, the song is a guide to bringing about a new world order in a post-apocalyptic world in which I will reign over my Children with an iron hand. 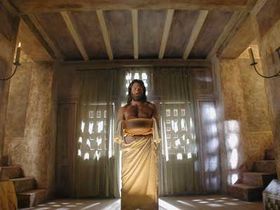 Listen, my Children, and you will hear of the prophecy-song.

As I foresaw in a dream, when the punk band Refused broke up, an auspicious alignment of seven stars set in place by heavenly forces remerged most of the band members back into one divinely-gifted group that would come to be known as TEXT, after the holy texts of the Bible -- particularly Revelations 1:19-20:

The forces guided them to layout their album as a message, a hidden guideline to me, and me alone, to remake the world in my image. The album begins with Requiem for Ernst Hugo, named after Ernst-Hugo Järegård, an actor who played the key symbolic figures Nero, Richard III, Thersites, and Hitler, and whose 1998 death opened the Book of the Lamb upon the Earth. Then follows the key piece of encoded guidelines, Sound Is Compressed; Words Rebel and Hiss, followed by a series of Tableau tracks, whose treatices on torture offer up both a description of and guideline to how my future reign must be run. 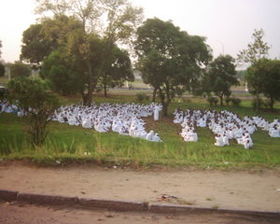 The Children gather to hear the fate of the world.

Seen your crying; Slamming all the doors
And I know you're trying; Doing it all like it's been done before
And I'm not denying; The costumes that we wore
And I know you're fighting; Peeling it off until you hit the core

The "you" in this context is me, who the prophecy is aimed at. It was not the band's will to aim it at me, but the forces that led to their formation had control over all key nexuses in their creative processes. When the song began, I was indeed crying, after having slammed the door when one of my loyal followers managed to escape the compound. She'll go to the FBI soon, I just know it. And I was trying, following the same recapture strategy I've always relied on, but to no success -- even when my Children dressed as police offers to lure her over.

This section should be self-explanatory.

By this point, the band has made it clear that this song is addressed to me, personally. The song begins a faint decay with a blues riff to static, showing the decayed state of the world, and shouting that it must be changed. Things fall to silence for the method.

Growing on attention as you stretch your span releasing
What was hiding on the inside now
Erupting where you scratched its, start to
Bleed internally and as the pain results in screams, you run for
Cover in a lie so old
The dust on every page has turned to gold

(musical chaos ensues -- the sound of pigs being slaughtered, the wailing and gnashing of teeth)

This cryptic passage reveals the mechanism of bringing about Armageddon. Span is clearly a double metaphor -- on one hand, alluding to the great span of black wings on the back of Lucifer, burnt to ashes by Azrael, puppet-killer of God on high. This is obvious; however, less obvious is its second meaning, which is integrally tied to "Growing on attention." What area of incredible, world-destroying power is the focus of attention, which hundreds of thousands of visitors per year, and grows day by day? The Yellowstone supervolcano. Its magma chamber spans dozens of miles, and contains enough material to blot out the sun from the planet, leaving the world in darkness -- darnkess, the rule of Lucifer. Lucifer, whose name comes from "Lux" (light) + "ferre" (bring) -- the "light bringer", yet one who dwells in darkness. Hence, the earlier reference, "Black is the Light that shines on my path." But remember the line after it: "Black is the color of freedom." As the Bible states, Lucifer *will* be defeated, but only the rebirth of Christ, the Lamb, can bring this about. And the Lamb has been reborn, so sayeth the Lord.

"What was hiding on the inside" now "erupts". But why? Erupting where you scratched it, causing it to "bleed internally". We must damage the magma chamber. How can our Family do that, without the great resources of the nation? Through pulling its strings. A bill for Yellowstone resource exploration is held up in congress, and the balance hinges on only a few senators. Destroying a few senators, our Family can do. The strings pulled, the prophecy will unfold on its own. The world's pain will scream forth, causing everyone to flee in terror, and take cover in an ancient lie with golden pages. What book do you know with golden pages? Why, the Bible. The differences between modern bibles and ancient Bibles are the lies, the corruptions from translation errors and deliberate distortion, and I have studied the original texts, to reveal the truth: that only those who anoint themselves with the Blood of the Lamb, that same blood that runs through my veins, shall be saved. The rest of the world, strained by famine, turns to conflict -- nuclear war, which kills off those that the eruption didn't. 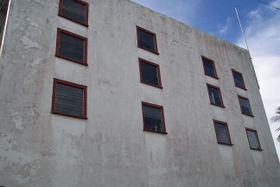 Any who wish to stay with our Family may do so, for as long as they wish.

How do we know this? After the chaos of the moment, we hear:

Hold that thought. Relive it. Suck it dry. Connect the dots.
Indulge yourself in the analysis, the focus of the moment, bring it
Close to your attention, all the filth and degredation
As the patterns of identity dissolve.

Hold the thought. Focus on it. Breathe it in and consume it, and you'll be able to connect the dots. The song commands one to indulge in the above analysis. In this world of filth and degredation, all of the patterns that we've forced ourselves to live with to cope with our decaying world will disappear, and we will live in purity. The world above our shelter will still be in chaos -- the debris and radiation will even seep into our shelter, but as noted earlier, we will be the only ones to live on. All of the pain that they made you suffer, all of the pain that they made me suffer, all of it, it will be insignificant. They shall be gone, to their own heavens and hells, and we shall inherit the Earth. So sayeth the Lord.

It it interesting to note that here, the band, for a brief moment, feels, confronts, and admits the influences of the heavens on this song -- that they are being fed prophecy, not writing it. They are not cogent enough to realize, however, that through this chaos, there is a greater order. It is not insanity that they're channelling, but fate itself.

Through the darkness, we shall create the new Light.

I believe that I have uncovered additional guidelines in the Raffi song Bananaphone, but am still working on decoding them. I will keep you informed, because any additional information will not only affect my fate, but your own as well. And while at times my reign will seem cruel, I am merciful at heart, for through it pumps the Blood of the Lamb. I am mercy.