The Sino-Japanese War was a massive conflict fought between Japan and China during the mid-1800s. Possibly one of the deadliest wars in Asian history, the Sino-Japanese war killed almost 10 million people, making it far more devastating than such conflicts as the American Civil War, World War IV, and the War Against People Who Have Oil. The conflict lasted almost three years and would have lasted longer if not for the intervention of Master Huang Chi, the Tibetan Monks, and the Mongol Hordes. 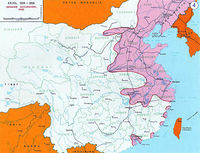 By 1844, the emperor Ahkmiti III, Emperor of Japan, had been in power for many years. Under the quidance of the Shadow Sages, mysterious creatures capable of whooping yo ass, Ahkmiti III was forced into various agreements. During this time, the Ninjas of the Animal Temple were in charge of making sure that all of the duties of the Emperor were carried out. One of these ninjas was Huang Chi, who would prove instrumental later. By this time, many of the younger ninjas had grown sceptical of the Emperor's imperialist views, and were worried that a war was coming. However, Master Zinzo Achakema, had full faith in the Emperor, and his warnings to other students made them totally unprepared for the beginning.

On the night of the Great Big Butt Dragon Festival in 1845, Ahkmiti III launched his first attack - on the Ninjas of the Animal Temple. His personal assassins snuck up on the Animal Temple in midst of the celebrations and murdered every single warrior in a brutal strike. At the time, Huang Chi was discussing important affairs with Pikachu in southern Japan, so he avoided the struggle. Zinzo Achakema also survived, but defected to the Emperor's service. When Huang Chi returned to the Animal Temple, it was in ruins. Huang Chi had first thought a fart had blown up the place, but after seeing the dead bodies he realized it was genocide. Huang Chi then faced Commander Akashabe Batit, the Icy Bat, and then his former master, killing both.

However, Huang Chi was too late to stop the Emperor, who had already launched his attack on China, Korea, and northern Taiwan (but who cares about that?). The first major battle was the Battle of Shanghai, where the Emperor's navy, under the command of General Akanzi Boa, bombarded Shanhai with nuclear plasm bombs. Meanwhile, in the smaller Battle of Northern Southern South Korea, another lesser-known general (Oprah IV), blew up half of Korea using Firebending. This would later improve Oprah's profession as a gay faggot, also known as "redundance" or simple "that gay woman". 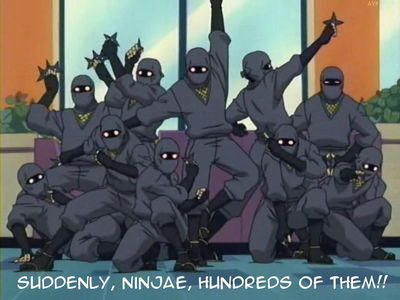 Chinese "warriors" doing a dance. One can obviously see why early in the war, the Japs whooped these guys' butts. I mean, look at them! One can see that they're dancing, are probably from Naruto (AKA that gay show with the sweater guy), can't use their weapons, and think that by wearing black in the middle of the day they'll either (a) hide or (b) impersonate an African, and neither would work. Luckily, the Chinese Army gained more powerful warriors later in the conflict. 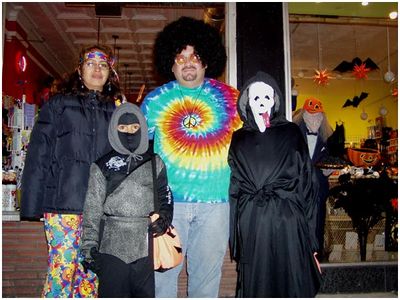 Chinese Special Corp. Team "Hallo" in full uniform. The Chinese gained many powerful warriors such as these four later in the war. From left to right: a terrorist, a ninja, a hippie, and Death. Although Death was not usually used on missions, he sometimes came down from Heaven to help either side because God was not paying attention at that moment. Terrorists and hippies were used to drive off Japanese/American fleets, and ninjas still danced around and did nothing.

China was a crucial theatre in the Sino-Japanese War. It was the largest area to be conquered by Japan, and had the strongest resistance. China also had a large array of communists, which are actually from communism (AKA the Sovietlands). In any case, the attack on China was led by Akanzi Boa and other lesser generals who we will not mention here. However, China's large population of people with AIDS and people who are obsessed with martial arts led the Japanese to falter somewhat in their attacks. For the beginning of the Chinese theater, which lasted until mid-1847, the Japanese stayed in Northern and Southeastern China, for fear of aliens, led by Your Mom, in the West.

Some important events in the Chinese theater: 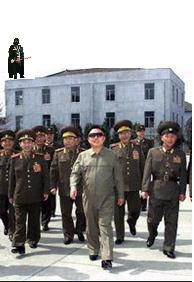 Korean dictator Your Dad celebrates the successful Korean defense. But who is the figure on the rooftop behind him? - the answer is oft disputed.

The not-that-important part of the War took place in Korea - the land nobody cares about. Early in the front, Oprah mounted a strong defense against Your Dad, who was in control of Korea at the time. At the same time, the Chocolate Monsters of Cuzzyland attacked from the northwestern east, creating a temporary distraction for the Kores. Korea, however, mounted the strongest defense in the war, and pushed the Japanese out by the time of the Assdragon Festival.

Some major events include:

The Taiwanese front was the quickest and most descisive front yet. Led by General George Bush, the Japanese ships made their way into a harbor full of enemy ships who shot the entire fleet down. Becuase of Bush's popularity with the Emperor, he kept getting more and more reinforcements. here is a general overview:

End of the War[edit]

The War ended in mid-1847, when Darth Vader commanded his fleet to go to Hong Kong. This collided with Azag's fleet. Although Darth Vader survived to play in Star Wars Episode V: The Empire Strikes Back, Azag did not, and both fleets blew up to create the Death Star, which also exploded. After this happened, the Emperor ordered all Japanese forces to go to Bejing. In the Final Seige of Bejing, the Japanese broke through the walls and killed the Emperor of China, the Dragon King. However, a rip in time caused Abrahama Lincoln, Mario, and Hitler to suddenly appear out of nowhere. Allying with Huang Chi, Wong Fei Hung and the young Bruce Lee these six beat up the Japs and saved the Chinese people. Godzilla then invaded Bejing, killing any people that were left. Hitler then committed suicide, Abraham Lincoln was assassinated (not the two "ass"es in assassination), and Bowser at Mario. Huang Chi escaped to Tibet. The Mongol Hordes then invaded and killed everyone else.