If you've just joined us, you've not missed much; they're both still just sitting there, looking at each other across a table with small, oddly shaped pieces of wood on it. Areshencov has moved onto the chin scratching stage, an unorthodox tactic at this early point in the match. Risky strategy there, could be a hideous mistake. He's misjudged this sort of thing before. If you remember in his last match with Fortesque, he blinked during a particularly vicious staring competition and had his mind crushed, like an insect. Lost the psychological advantage completely.
Shabalov is trying to cultivate an air of disinterested contempt for everyone and everything. At the moment he's sneering at the chess pieces, as if they were mere pawns in his twisted game. Which of course they are. Well, not the rooks, knights, bishops, queens or kings. But the other ones - the pawns - they are pawns. 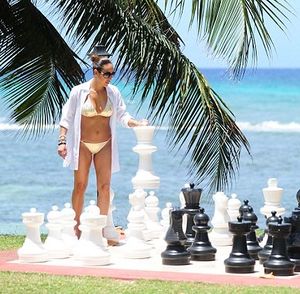 Areshencov's hypnotic stare bends the pieces to his will. Manipulating them, like helpless puppets.

Did you know that White has the first move? Just a piece of useless trivia there, I don't know why I said that but it seems to have wasted time.

This of course gives White a significant advantage. If we look at some pointless statistics: this season White has scored about 10% better than Black (55% to 45%) due to that initiative. Which renders the other player a strategic eunuch. His intellectual genitalia crushed beneath the hammer of decisiveness... rather nasty that image. Wouldn't like to see any of that today.

The pre-match mind games are almost over (they went into extra time due to a protracted fit of coughing by Areshchenko) - a disappointing draw there. Most people expected to see at least some mild fidgeting, and intermediate amounts of sweat, that hasn't happened. He usually sucks out their will to live like a leech, odd that that's not happened. His hand's hovering over one of the pieces now. Will he move it? Yes, he has, thank god, the tension is over... Who could have seen that coming? Brilliant, if unorthodox.

An excellent move, Knight's widow transecting Bishops gambit. Areshchenko may have the complexion of a corpse, but he certainly doesn't play like one. That move is common among players from beginner to grandmaster (not that anyone cares). Not so common with Areshchenko though; he usually manipulates the pieces with his enormous mind, like watery clay, to reach checkmate in zero moves. I like those games, they're short. I mean, 'decisive'. 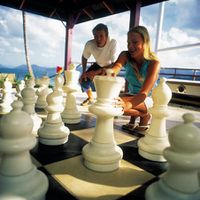 This move has lots of advantages. It's the first move (always important) and it stakes out a lot of territory in the center. Whichever player controls the center with his pawns will be able to manipulate the rest of the board like a bloated spider in the centre of a web, drawing the other players pieces in like flies and feasting on their warm flesh. He'll probably be able to find good squares for his pieces too.
Shabalov is visibly unnerved now, he scratched his head just before. He's obviously been brought close to collapse by this killer move, his mind shredded into a soft papery goo. Will it dribble out of his ear? I don't know, but I'll stay to find out. He must be operating under some kind of basic animal instinct now, he's just picked up a knight.

White could have moved out the queen instead, but that would be dangerous, like chewing a grenade, since the queen would be vulnerable to attack by Black's pieces. The queen is too valuable to be traded like a worthless, common whore for any other piece, so it can't do much by itself unless the opponent carelessly leaves pieces unprotected. It is better to wait in the darkness, like a wolf, until other pieces are lured in, enabling the queen to barbecue them like fresh meat. 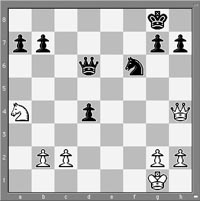 Rook anunciates Folly, dissects the feeble defence put up by Shabalov. THE EXCITEMENT!

Shabalov could also have moved out the light-squared bishop. But he is a fool. His feeble mind does not see the truth. Areshchenko is already bending him to his twisted purpose; see how he suppresses his manic laughter. Shabalov is being manipulated like the pieces he is playing with. Watch his mind crumble, like overly dry cheese - Areshchenko will probably start eating the crumbs any minute now, then spit them out as a gesture of contempt.

Notice how the hypnotic eyes of his opponent force Shabalov to look away from the board and play without seeing his opponents moves. A serious disadvantage.

He makes a weak move, more feeble than his shattered mind, entering the infamous Damiano Defence. An action only lunatics and cretins would take. Areshchenko smiling now, like a cat who has bitten off the legs of a mouse, and is waiting to see what it will do next. Which is usually not much, as mice without legs are not terribly mobile. 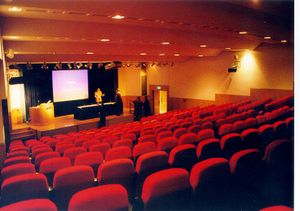 As the match ends the euphoric crowd goes wild.

Either knight move would maintain the balance of the game by contesting the center. But Shabalov is too battered to think logically, and flails his arms around wildly for no apparent reason while drooling like a pig. Areshchenko makes him dance like a puppet for his own amusement, before sneeringly allowing him to continue playing. Or should I say, losing.

Areshchenko toyed with him for a couple more hours before putting him out of his misery, like the merciful death of a dog impaled on a spike. At the end of the day, chess is a funny old game.