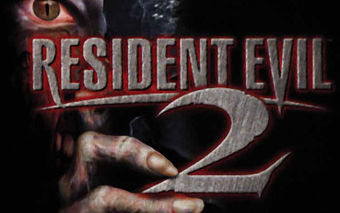 If you're going to make the game cover, cut your nails for goodnss sake!
“In this world there are only two tragedies: One is not getting what one wants, and the other is getting eaten by a zombie.”

“Only you can prevent dumb zombies.”

Resident Evil II is the timeless classic of a man and his hatred for hostile targets. Some consider the game to be a romantic comedy.

Scientists before eating by zombies.

Resident Evil II starts out with a group of scientist nerds living in their corporation's basement who all collectively decided that they no longer wished to take baths (with the exception of two scientists, who enjoyed taking baths so much that they decided that was all they'd ever do). This of course, led to unsanitary conditions which eventually caused all of the scientists to become infected with a severe case of leprosy. A team of teenage babysitters were called to go to the house and try to get them to take a bath, however, the scientists' unwillingness to cooperate and run-ins with their overbearing mother nicknamed "The Red Queen" (possibly because she was having her period) led to some minor difficulties in the plan. Leon S. Kennedy, (a random emo black guy) entered the city, looking for a good brothel. (to see if he ever found one, look up Resident Evil 3: Did Leon find a brothel?) He is later dissapointed to find that the only people who wanted him were either lesbians, whores, little children or black police officers.

“This plot would be a lot quicker if either Conan or Chuck Norris were in it...”

The majority of the game revolves around solving mind-bending puzzles such as figuring out how to turn the doorknob and how to fire a pistol. The graphics consist almost entirely of polygons, and the music in the game consists mostly of sound waves. There are numerous types of enemies in the game, from the sweaty nerd, to the overgrown sweaty nerd with scythes for arms and an impenetrable exoskeleton of bone. However, despite the differences, all of the enemies can be killed in the same manner: by blasting them to hell. The bosses of the game are also very highly imaginative and unique, and the player must fight against such enemies as "Giant Spider", "Giant Shark", "Giant Snake" and "Giant Man". 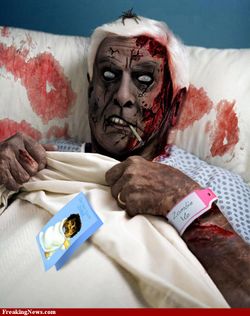 This man played the game for too long a time and suffers the grim consequences.

Furthermore, the gameplay is very educational, teaching players that grievous injuries and illnesses can be cured by smoking herbs or by inhaling an Aerosol spray; that if you die, you can come back to life if you had recently used a typewriter and that if you ever see anything in your environment that can be picked up or interacted with, it is ALWAYS a good idea to do so.

If you die, the game doesn't tell you the usual "Game Over." No, that would be too boring. It says, plain and simple, YOU DIED. Or maybe YOU ARE DEAD. Depends on which game you're playing.

“Capcom did me a favour by not giving me a big role in this piece of crap game.”