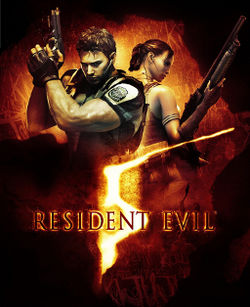 Looks like our favorite Resident Evil hero has been taking steroids!

For the uncouth among us who choose lies, the so-called experts at Wikipedia have an article about Resident Evil 5.

Resident Evil 5, is yet another video game designed by Capcom, and is the seventh installment in the series. How long they plan on continuing in Africa, just like Resident Evil 4 took place in Spain, as the Resident Evil heroes got sick of living in America.

Resident Evil 5 takes place a few years after Resident Evil 4. Chris Redfield arrives in Africa to track down a scoundrel named Ricardo Irving who had been selling Umbrella bioweapons on the black market to get some dollar dollar.

Chris is assigned a new partner, an African-American chick named Sheva, after his old partner Jill falls to her death while trying to make Albert Wesker die in a Disney villain fashion.

Chris and Sheva discover that the local residents have turned into homicidal maniacs known as Majini, and decide to kill every single one of them.

The pair manage to find Ricardo Irving, but he manages to escape along with a hooded chick. Chris and Sheva learn that the maniac is heading to an oil field, and pursue him, killing more deadly Majini in the process.

Ricardo Irving transforms into a horrible monster in an attempt to kill Chris and Sheva, but ends up getting killed instead.

Chris and Sheva follow the hooded chick to an underground laboratory, where they discover a corporation named Tricell had been continuing Umbrella's crazy research.

Albert Wesker getting owned by the good guys. 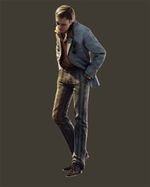 After this game black people started to boycott Capcom. But of course they did not succeed...

Due to constant bitching from the black people and the face eating zombie outbreak there, Capcom decided that Resident Evil 6 would take place in Florida. In Resident Evil 6: OMG Zombie Apocalypse Florida, you play as Chris Redfield and Sheva, who have recently joined the U.S Coast Guard. You will then fight off illegal Cuban zombies trying to make their way into Florida.