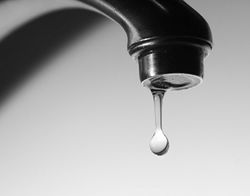 What kind of a man are you, you can't fix a simple leak?

Plink is the sound your leaky bathroom sink faucet is making. Plink.

It is driving you nuts. Every now and then - in fact you have now confirmed it's every fifteenth drip - it says "plonk".

At first it wasn't so bad

You don't pay a water bill, because plink you live in an apartment complex that doesn't have individual meters for each plink residence. For this reason, your neighbors are essentially helping you foot the bill for the buckets you plink are plink wasting, through increased rent.

Now, not paying a water bill, you've always enjoyed the forty-minute showers, because it often takes that long for plink you to finish after soap first hits ballsack. So when that bathroom sink faucet first sprung its leak, you didn't worry too much about it. Plink. In fact, the slow dripping was even soothing late at plink night when all else is quiet.

Then one night, you couldn't sleep

It wasn't the drip that was keeping you awake. It was an important life concern. Plink. Your ex-wife was threatening to limit your visits with Eddie, and plink the thought of losing your counter-influence on him against her intransigent obsessive man-hate plink frankly made you physically ill. That night, you began to associate every drip with another one of her little emasculating comments to the poor boy:

It got so you had to cover your ears with your pillow to get any relief.

The crux of the problem 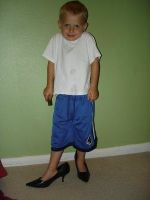 The so-called new dad, you see, plink is no help at all. She found herself a good-for-nothing sissy of a quote-man-unquote that she has successfully pussy-whipped into shape plink, and now Eddie has no real man to look up to besides you. This piece of shit, Roy, just sits back and giggles, yes, literally giggles, when Eddie puts on the high heels and parades around. And he has the nerve to freak out when you get angry and make Eddie take them off. Plink. Shit. He said you are stifling his self-expression. You couldn't believe it. Since that fiasco, you have vowed never to miss a backyard barbecue and leave Eddie to degrade himself for their amusement. Plink.

You have nothing against gay people, and if Eddie were gay, you'd love and support him as much as ever. But - this is your son. Sure, you have made fun of your buddy Pete whose son has that gender-identification problem, but Eddie is your son. You will be damned if you will sit idly by while he helps that bitch do this to your flesh and blood. Plink.

So why not just fix it?

You call yourself a man, you worry about Eddie's manhood plink. And you can't fucking fix a dripping faucet. How embarrassing. You're even too embarrassed to call a plumber, because real plink men don't call plumbers. Plumbers are for women. But you plink have looked under that sink and all you see is a confusing curvy pipe. You are lost. You tell yourself that it's just a little drip, and only plink women and overly sensitive a-holes are annoyed by that. But damn if plink it hasn't started making you think crazy things as you sit alone, lonely, lost and bothered late at night with the TV on and the sound down plink.

The night is long and you are sleepless

The bitch landed herself a hippy professor. So she's happy now. Losers.

They say sleeplessness can fuck with your sanity. Maybe that's what's happening to you plink. You know, Sid fixes things, maybe you should call him. No, you're too distraught to clean the place up enough to let someone come over. Plink. Conan O'Brien's face is half-covered by a hamburger paper that should have fallen off the TV days ago. What, is gravity malfunctioning in your apartment too now? Plink. No, that's absurd.

What is wrong with you? Plink. That damn faucet. It's going to send you over the edge soon. Maybe you should just shoot it.

Hmmm. What would happen? Would the damn plinking stop? Maybe water would shoot up everywhere.

Where is your gun? Plonk.

Naw, don't get the gun out. You're in no condition to handle that. Plink. You can feel the combination of impulsiveness and anger that sleeplessness causes, and anything with a trigger would be bad news right now. Plink.

No, you're not going crazy. Shooting the faucet will just... Plink.

Where is that pistol? The closet. On top, in the shoe box. It's funny, when did you buy the shoes that came in this box, you wonder? That was a long time ago. You don't even remember. The box says "Clark's". What the hell? Clark's shoes? Must have been one of those Payless pairs you used to buy before you got the alimony plink reduced. Thank God for that Father's Rights group. At least you know Eddie's getting your hard-earned cash, and not that bitch. Plink.

How typical. A .38 special. Could you be more "I only have a gun so I can say I have a gun, and I've never taken it to the target range or even touched it since I finished that safety training."

Safety off. Plink. Water's gonna shoot out everywhere, then you'll have a huge mess. Maybe a huge mess is what you need.

Then you'd have a legitimate reason for needing a plumber. He'll probably be able to tell that you shot it, but you can just deny it, then what's he gonna do? Just fix it, is what. Plink. Yeah, this is a good plan. Plink. You're looney from three days without sleep, but you think, yeah, this'll take care of it. Aim... Plink.

That was loud, but not as loud as you were expecting, for some reason. What happened? There's no water shooting out everywhere. The faucet is thrashed. Direct hit. Nice shot. It's just dangling there. Water is slowly trickling from the base of it now. At least the plinking is-

Oh, no. What is that? It's gotten worse. The trickling from the faucet base has reached the edge of the sink and now it's dripping on the fucking floor. Plink plink plink.

Auugh. Now what? You know who's fault this is? It's Roy. You were fine with the dripping, until he came along trying to steal your own son - your own fucking son - from you.

This thing'll work better on Roy's ugly hairy head than on that faucet. Plink plink plink. The bitch is at the hospital, night shift. Cleaning out bedpans. Eddie's at the hospital day care. Roy is home alone. Asleep.