From Uncyclopedia, the content-free encyclopedia
(Redirected from Low)
Jump to navigation Jump to search 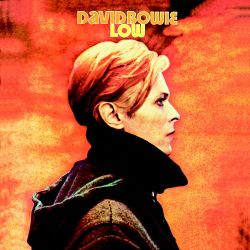 The Low album sleeve was hacked off the justifiably unpopular 1976 Nicolas Roeg film, The Man who Fell To Earth.

Low is a 1977 album by androgynous English rocker David Bowie. It was released long after any real hope of commercial or artistic breakthrough was possible, but not before Bowie's self-delusions of granduer had quite died out. The experimental album deals with the worship of Bowie's 'inner existential void'. Help came from various artists, notably Brian Eno, whose career had reached its peak at the time and he was at a loss on how to progress.[1]

The album was mostly recorded in France. Due to the low budget, Bowie relocated to Berlin where the Germans found it sensible to ignore the Limey dork rather than give him the attention he craved elsewhere. Bowie was quite pleased as the derision then came solely from Brian Eno; his producer, Tony Visconti was too busy contemplating his next Thin Lizzy album and Iggy Pop continued to be too messed up to care other than when he needed a fix. 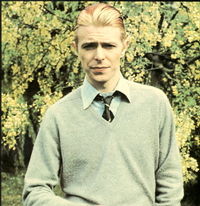 Bowie welcomes the press in Berlin, they however rush to other celebrities as Bowie was "a little depressing and off-putting even by German standards" according to one Berlin reporter.

For those without comedic tastes, the so-called experts at Wikipedia have an article about Low (album).

There are no themes in Low, though Bowie made many up throughout his later career. There is a structure however, the first side was made up of songs culled from the Das ist mein Kabbalah tour where Bowie performed Nazi gestures and Hitler impressions/interpretive dances on stage - much to the amusement of Bowie's now booming skinhead audience.

The second side deals with Brian Eno's next album Shafting Kraftwerk - an unreleased album which Eno apparently used on Low. The instrumental tracks were haphazardly composed during various drug binges across Europe, however according to Eno, Bowie did help with some of the production, despite Eno being described as doing most of it by everyone else involved. Low is often hailed as being a testament to electronic music and a legacy for Bowie's reputation.

Throughout the album there is a brooding quality with the lengthy electronic pieces along with stripped back "meaning laden" lyrics. The meanings were flung together by a PR team afterwards, with the main goal of putting Bowie's ailing career back on the map. This has to some extent proved successful as the Ziggy outfits made Bowie look like an "ugly turd" and he was glad to be rid of the freakshow act.[2] 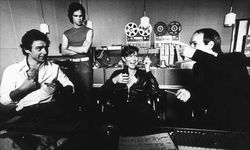 David Bowie, Earl Slick and Brian Eno laughing at Hansa studio staff offering tea. They apparently developed a haughty German arrogance whilst recording in Berlin. The second guy on the left is thinking of giving Bowie a piece of his mind after giving a piece of his ass the previous night.

Initially David Bowie and his band planned to record the entire album at Château d'Hérouville, Hérouville, a French recording studio. However due to the fact the all the band was a little strapped Bowie elected to travel to Berlin, Germany, where prices were cheap and drugs were easily available for the 'healing process'.

The time was characterised by drug abuse and the need on Bowie's part to get hold of Germans Apparently Bowie would enjoy forty-eight hour days, however it’s thought that he spent a lot of his waking times sleeping or complaining about various issues that no one, including himself, can remember.

Several of Bowie's PR and marketing bodies attempted to block the album’s release due to the "perceived" crapness of it - Bowie was however adamant in the midst of it and optimistically claimed that the best years were behind him anyway so he might as well "cream some green off this German electro crap".

The album was subsequently to influence a new wave of music dealing with anomie and being a bit of a self absorbed prick. Journalists at the time often commented that Bowie became in tune with himself and grew an ever wider repertoire of self knowledge. The moods Bowie felt at the time in Berlin are reflected in the music - boring, burnt out and too messed up to really be bothered making the album and hence its arty credentials. Critics were initially impressed with Low, however they were disappointed to find only depressives liked it. Many of them (including the critics) blew their heads off to Sound and Vision and Low become the suicide mix tape of a generation.[3]

Sadly all those involved went on to make further music, all of which had a limited success until the 1990s when social backlash went out and navel gazing came back in with a vengeance. The album achieved a cult status as it had many of the instruments that poor electro dub outfits would later use. The industrial scene practically transplanted the albums message and the Goths eagerly lapped up the albums many 'themes' about "personal struggles and issues."

Bowie eventually left Berlin when some royalties from Ziggy Stardust started to come through from his thieving managers.[4] He returned years later on tour, however Bowie found that the energy that accompanied his previous seventies efforts could not be recaptured. Bowie has stated that after listening to Low recently he contemplated suicide: "There was such creativity in my despair that I'll never regain, how I wish I was that miserable and coked out again."