I am not kidding

You're probably not going to believe me when I say any of this, because you'll think I'm paranoid or something, but you gotta believe me. This isn't like last time when I thought that Stephen Hawking ran over my cat. Honest to God, I am not kidding this time.

Okay, there is a fleet of Martian battleships hovering RIGHT ABOVE EARTH! RIGHT NOW! The Men in Black have been dispatched, but you know what? They're all dead now! The Martians got them with their heat rays and the Men in Black are fucking gone. Oh my God, we are so screwed. I would hide my secret stash of heroin, but the Martians probably don't want that. They just want my blood, my blood to feed their red weeds that they are going to plant all over our planet! You really must think I'm shitting you already, but I AM NOT KIDDING. 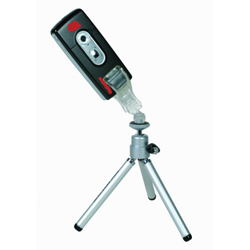 This thing destroyed my whole town and nobody believes me.

More of them are coming. I'd tell the United States Government to mobilize the Army, the Air Force, and maybe the Navy too, but that won't do any good! Because you know what? The machines have shields! We could throw all of Russia's nuclear arsenal at them, we could even throw Russia at them, even thousands of Russians and nothing would happen!

Oh my God, I think I'm having a nervous breakdown, but there's more I have to tell you.

Just when you thought things were bad already...[edit]

You think the food we eat is safe? WRONG! If you ate spinach today, you better say your prayers right now. Millions of people have already died from eating spinach. You know what I think? It's either a terrorist ploy or the work of the United States Government. Same thing. They're just trying to kill the proletariat. That's me and you! They don't care about the working class! We're just disposable to them! I'm so scared, man, I thought I felt a little nauseous today and I can't remember if I've eaten any vegetables! On top of poisoned vegetable the govt is using radio waves to brain wash the us. Remember when TV was switched to different air waves and everyone had to go buy new sets of rabbit ears to pick up the same five chennels. Well guess what those freed up waves are now used to mash our brains into mush. On top of fluoride in our drinking water our minds are being destroyed on purpose. THe more stupid the people are the less questions wwe will ask, the politicians will continue getting money for shitting on us and we will just wallow in our shitty struggling lives to eventually grow old and die. Not to mention that when you are old and shitting on yourself nobody will care. You will not get social security becuase that was a scam to begin with. Now, what are you going to do when yuou are old and your mind will be mushed jello and you will not be able to figure out how to feed yourself. Thankyou united states governemnt you control us and now you have to deal with your brain dead old dying people. You better make assisted suicide a nationally legal because nobody will want to sit in their loaded diapers drooling on yourself.

So you know our Pope, right? Well, he went and pissed off a bunch of Muslims by saying their religion is evil! Now they're planning to march across Europe and Asia and unite it under Islamic rule. They might even sail across the Atlantic to conquer the Americas too. I think they call that Jihad or something. I mean, every Christian I know is shitting their pants right now, because we just don't know how to fight off all those Muslims! And I'm Christian and I love Jesus more then anyone else I know, so they're probably coming for me first. You gotta hide me, man, there's gonna be one and a half billion pissed off Muslims at my door tomorrow saying that my God is a lie, you gotta fucking hide me. I am not kidding.

What's worse is that God and Allah are really pissed off right now. God went to Allah's house and broke down his door, saying that our Pope is totally right and that Allah and Muhammed should burn in hell. Then Zeus threw a thunderbolt in God's face and gave God third-degree burns. Then Lucifer raised a whole bunch of zombies from the dead. So now we've got four all-powerful gods fighting each other on Mt. Olympus, zombies running amok all over the fucking place, and I heard that God accidentally knocked down the Great Wall of China, so the Mongols are invading again. And on top of that, the noise woke up Cthulhu, and has already started eating his worshippers. He eats them first, and quickly. Everyone else gets eaten slowly and must experience infinite pain. Shit, we are so dead.

This is the end of us all.[edit] 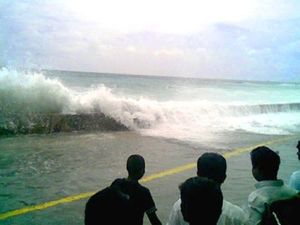 Alright, aside from Martians, contaminated spinach, and angry deities, we are also gonna get punished by Nature. You know how we've been polluting the environment for the past century and a half? Well, the environment is striking back. I went to catch some fish today, and all I could see in the river was shit, industrial waste, and bloated fish that had three eyes. Not only that, but the fish tasted like puke. For the love of God, if we don't get killed, we're gonna starve!

You know what else? The ozone layer just completely fucking disappeared on us. It was there one minute, and the next it just said "Well fuck you guys, I hope you all get skin cancer from the sun, which by the way, is about to explode in three minutes," and just left. I noticed some really weird looking spot on my arm a few minutes after that, I am fucking scared shitless.

Then apparently, there was a huge volcanic eruption somewhere in the ocean. It destroyed Atlantis, and now there's a 7-mile-high tidal wave that's heading towards New York. I can't even swim, man. Can I please borrow your life jacket? WHAT?????? You accidentally punctured it with a needle while shooting heroin? Son of a bitch, you're gonna die too!

There's also a meteorite hurtling towards earth at speeds of 10 miles a second, so I'm going to go into my bomb shelter. Not like that will help me, since I think I pissed off Zeus a few days ago. I'll see you in heaven. What? You don't believe in the Messiah? You're gonna fucking burn buddy. You didn't believe anything I said?! How many times do I have to tell you, I am not kidding!