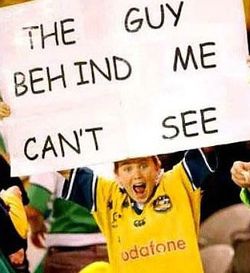 Are you frequently ignored by your peers? Are you religious? Do you want to get revenge by slowly and surely driving them insane? DO YOU WANT TO BE SUPER DUPER ANNOYING? Well good. Here is a long list of things to help you with that.

This is a very popular method and is the most powerful if used over and over again. Basically, all you need is a very, very, VERY annoying song that will stay in the desired person's head for a long time (like baby shark). Humming is a good idea but if you can possibly get the entire lyrics off of the Internet, that's even better. To crank it up a notch, make up your own lyrics and a funky dance to go with it.

Here are some suggestions...

If you really have to release some bowel pressure, here are some great suggestions on where and when to do it.

If you are really that mischievous, you could tell them to look at something down low at around waist level (say their car's bumper). Once they bend down to look, let 'er rip right in the face. This will only work once. And you may want to run.

Thanks to modern day technology, there are PLENTY of annoying things to do to on one's computer. Most of these can be executed from Control Panel.

If it's not your computer...

If the victim's computer is running Linux

If you can't get your hands on someone else's computer, don't fret. If your family shares a computer, change all of their passwords (or the password of the account everyone uses).

Tip:
Be very careful to actually remember these new passwords or blackmail will be out of the question.

These methods should all work for just about any vehicle from cars to boats and stuff. Just make sure your not the one driving.

Tip:
Airplane windows don't open to easily so you should bring a knife or cork screw or some other dangerous implement with you to help open them.

Doing any of the following will ensure that any teachers/supervisors/big wigs/principals/Special Service Agents will keep you in their bad books for a looooong time.

At the Art Gallery...

At the Science Museum...

Use these for writing important letters or essays. Actually, if they're that important, you probably shouldn't.

These methods are not purposed for a movie theater and/or stage theater, but rather when watching a movie with friends, family, or strangers in your/their house.

This insanely funny annoying thing is brought to you by the comedic genius of David Acer(Douche). First thing you do is find your self a roller coaster and a single screw of any length (the bigger the better). Then board said roller coaster next to either a first timer or very nervous person. Once you're strapped in and the roller coaster starts moving and you get to that very big hill at the start, pull out your screw and announce "HEY! WHERE THE HELL DID THIS COME FROM?! AAAAAAAAAAAA!!!!!!" This may or may not work, but it's still fun to try.

Just before you're about to drop shout 'HAS ANYONE SEEN FINAL DESTINATION 3? I KNOW THE SAME THING IS GOING TO HAPPEN!'

The best people to use these, or any annoying method, on are people who are really happy or really angry. It'll intensify your enjoyment if the person is angry or cheery. 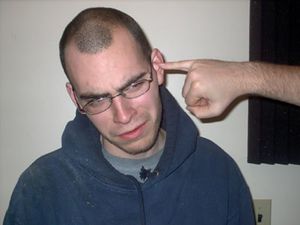 Knock it off dude. Seriously.

Randomly change articles so there is a random spot where there is not a bullet, when surrounded by other bullets.