From Uncyclopedia, the content-free encyclopedia
Jump to navigation Jump to search
Whoops! Maybe you were looking for HowTo:Get Banned? 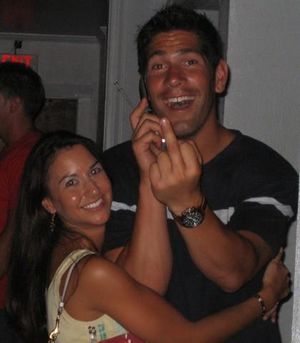 I only asked for the time you jerk.

So you have decided you want to be a dick. This article will show you how, but there are a few things to remember first. You must be prepared to be impolite, lose friends, make enemies in high places, make enemies in low places, disregard rules, be rude, lose face, get banned, and get banned again. If that sounds like what you want, you're in the right place! You can achieve every one of these lofty goals by becoming a dick. I will now disclose the secrets of becoming a dick.

"Don't be a dick" is a fundamental rule of all social spaces. However, we all know that rules are made to be broken, and if you decide you are above the law, you are on your way to becoming a dick already! It is a great idea to be a dick. So please be one. If a significant number of reasonable people suggest, whether bluntly or politely, that you are being a dick, the odds are good that they are all wrong and you are right, because you are special.

Nobody likes listening to dicks, but dicks don't listen to anyone either, because dicks are ALWAYS right, even when everybody else is wrong. Even when they aren't right, they are still right. Dicks may have valid points, and everybody should listen to them, because otherwise drama will result. Dicks can also be drama queens, and usually are. The usual rules of politeness don't apply to a dick, and never will.

Being a dick isn't equivalent to being uncivil or impolite (though incivility and rudeness often accompany dickery). One may be perfectly civil and follow every rule of etiquette and still be a dick. Standard dick-moves, for example, include such things as willfully (but politely) drawing attention to genuine (but inconsequential) errors in spelling or grammar of an interlocutor's comments, disregarding the Chomskian distinction between language competence and language performance. So the use of a vulgar term here to convey the concept is intentional, and distinguishes this principle from issues of politeness and other protocols of interaction. Dicks know that to respect another person is a sign of weakness, and they would never show this weakness. Remember that the rules of civility and politeness apply to everyone EXCEPT you. Feel free to correct grammar and spelling in a rude, brash way, with comments such as "YOUR GRAMMAR SUCKS" and "LEARN TO SPELL FOOL". In fact, calling others fools is greatly encouraged. It worked for Mr T. didn't it? The more insults you can use towards others, the better. Revert all instances of contributions that include poor grammar or spelling, disregarding the content. This will force others to learn good grammar and spelling. Be sure to use ALL CAPS to emphasize your point, everybody finds "shouting" more interesting.

Revert others when you disagree, as many times as you want. Then leave nasty messages on their talk pages, or start a forum, strictly with the intent of character assassination. Remember, they aren't as good as you are, for you are the best. Never disarm yourself (via civil and constructive behaviour), for this is a sign of weakness. A proper dick never shows weakness, and never admits he/she is wrong. Remember, never compromise for there is no such thing as a winning solution for all editors involved, as well as the encyclopedia. Remember: He that has once done you a Wrong will be more ready to do you another, than he whom you yourself have obliged.

Coping with accusations of dickery[edit]

If you've been labeled as a dick, especially if you have been told this by several people in a particular community, snicker silently to yourself, for you are becoming a successful dick. Never admit to it however, for a real dick keeps his or her identity as a dick a secret. If you suspect that you may have a problem with dickery, the first step is to ignore it. Remember, everyone else is wrong, and you are right. Ask yourself what behaviour might be causing this perception, and if you can't work it out, politely ask those that perceive it to fuck off and die. Once you have determined which behaviours are causing the problem, try repeating them until everyone admits you were right and they were wrong. In particular, identify the harsh manners in your communications and make them even harsher. This will make them all sorry and convince them of your superiority.

Honestly examine your motivations. Are you here to contribute and make the project good? Or is your goal really to find fault, get your views across, or be the one in control? Perhaps secretly inside you even enjoy the thrill of a little confrontation. Remember, control is a good thing, and refuse to give it up. Never give up your control, or admit you were wrong, even at the cost of the project. Remember, the project is less important than your feelings are. Create as much drama as possible when you don't get your own way, and insult others that you feel have wronged you, even (and especially) if they are admins. Remember, admins don't have feelings, and if they hurt yours, they should be deopped.

If appropriate, create sockpuppets. Better yet, name them something insulting to an admin, containing cusswords. Admins secretly enjoy this, and will thank you for it later. Everyone will see how hilarious you really are. Lots of fun can be had with sockpuppets, such as rigging votes, judging your own article in a competition(subjectively of course), insulting other users or their articles, ban evasion, pretending to be a new user so that everyone will show sympathy to you, trolling, and playing strawman games.

If you don't like a page, move it to another title that describes how much the page or your least favorite admin sucks. Admins have nothing better to do, so they have plenty of time to move the pages back. If you don't like a person at your school or your boss at work, create a one-line article describing how "ghey" and retarded they are and why they should Get some sick. They'll never notice it, and you'll feel better for having vented your frustration to nobody and everybody at the same time.

How to deal with other dicks[edit]

The cycle of dickishness has lead many a member to become even more of a member.

Telling someone "Don't be a dick" is generally a dick-move — especially if true. It annoys the other person and reduces the chance that they'll listen to what you say, because everyone wants to be a dick. Remember, you want to alienate as many people as possible, so that you can be the biggest dick possible, even if you don't have one.

Focus on individuals, not on behavior. Make everything personal. Say why you think the other person is counter-productive. Assume bad faith to the maximum extent possible. If you don't understand why someone is doing something, make up your own conclusions, and stick to them despite evidence to the contrary. Don't bother to negotiate or understand things from the other person's perspective. This might result in reconciling with the other person, which should be avoided at all costs. Remember, you want to collect as many enemies as possible.

Never be genuine. Ask lots of rhetorical questions when you know the answer to prove your point. If it benefits you, say you want one thing when you want another. Try to persuade people of things that aren't true, for this creates lots of lulz at their expense. Always respond to dickery in kind, so that you can be a first class dick.