The Homosexual Army of Liberation or Rainbow Army, officially known as the Armed Forces of the Gay Lesbian Bisexual Transsexual Transgender Intersex Questioning Committee for Freedom Tolerance and Equality for Jews and Muslims (AF-GLBTTIQCFTEJM) was founded in 1970 as an underground movement by German gay rights activist Heinrich Shtubenbacher and his American born lover, Ernie Crash, in San Francisco.

In the wake of the Stonewall rebellion, Shtubenbacher reasoned it would be possible to create - via assistance from leftist movements such as the Weather Underground, the Vietcong, and Soviet Union - an armed force of homosexual men. This army, he reasoned, could take over a region of northern California and encourage homosexual/bisexual/questioning men in the US military forces to turn against their superiors, thus creating a country wide "gay revolution" and eventually overthrowing the Nixon regime.

Shtubenbacher, styling himself as "General Major" and his companion "Colonel Crash" organized a team of 200 California men and began training exercises at Big Sur under the slogan of "The Sunshine Men's Health Club". In the following months, the team steadily grew to 2000 homosexual men. Bisexual men were "not to be trusted" according to Cash, neither were lesbians or transsexuals.

Shtubenbacher made contact with Soviet diplomats who originally expressed interest and managed to requisition several dozen World War II era machine guns and several dozen World War II era bullets. However, when premiere Leonid Brezhnev heard of the idea, he was rumored to have vomited in the presence of the Central Committee (which, according to sources, permanently damaged Molotov's $1000 East German suit) and banned any further support.

Shtubenbacher's first assault occurred in the Civic Center in downtown San Francisco. Due to a lack of weaponry and the last minute pullout of the allied Pancho Villa Front, the city police and national guard managed to crush the "Sunshine Division" (as it was then called), leaving many of its soldiers to flee to the Fisherman's Wharf (where the sea lions saved several men from recognition by police) or flee through the BART and trolley stations. 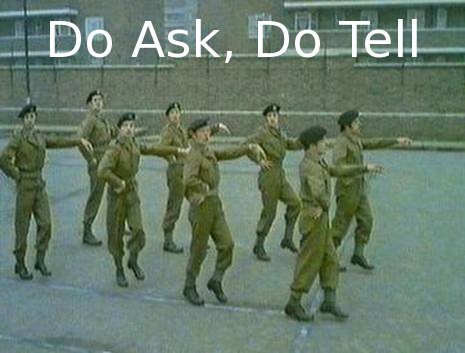 Realizing the errors of the Civic Center Assault, Shtubenbacher gathered the remains of the "Sunshine Division" and formed the "Homosexual Army of Liberation". He had decided to try a different idea - capturing a prison and enlisting the liberated convicts (many of whom he expected would have gay tendencies) into his army.

The ploy worked, on September 13, 1971 two prisons were raided. What the press reported as "prison riots" were, in fact, the direct actions of the "Homosexual Army of Liberation" (abbreviated as HAL). From the liberated convicts Shtubenbacher founded the "Rimmers" and "Fisters" battalions, the latter earned a reputation for savagery and often wore German helmets (to the tremendous protest of several commanders).

By this time, Shtubenbacher opened the "HAL" to bisexual men and a few transsexuals were reported to be officers, but was still virulently hostile to lesbians. The Northern Vietnamese government became Shtubenbacher's sole sponsor, which finally attracted the attention of the previously ambivalent Nixon, who ordered San Francisco mayor Alioto "Take care of those clowns" (Some have rumored that Nixon had actually said "Take care of those ass clowns", thus introducing that term to the English language).

A new decision came by way of Shtubenbacher, which was to form a navy. "Sailors were our number one asset, and we never even thought of them till now!" said Shtubenbacher in a February 1973 meeting in San Jose. However, with support from the Vietnamese wavering, and the increase of FBI infiltration, the only naval expedition was an attempt to take over several Hollywood luxury yachts which proved unsuccessful.

The Formation of the Committee[edit]

Lesbians finally made way into the HAL via the Weather Underground, when Bernardine Dohrn met with Shtubenbacher and discussed the need to include women in his operation. Shtubenbacher initially protested, claiming "My men have cojones and style, dykes don't", but then after heavy pressure from the Rimmers, who were getting increasingly stronger in numbers and close to forming a cue, buckled (according to some sources, Shtubenbacher was alleged to have had a sexual experience with feminist Gloria Steihem, which introduced him to bisexuality).

On July 4, 1976 during the Bicentennial, the Gay Lesbian and Bisexual Committee for Liberation and Freedom was formed in Nappa Valley. The army was nicknamed the "Rainbow Army", and several new battalions were introduced: The all male "Sissy Battalion", the "Bi-Battalion", the mixed "Trannie Battalion", the female "Butch Battalion", and the female "Lipstick Battalion", the latter which grew into a specialized intelligence unit used for infiltration into heterosexual circles.

This period also saw the final rise of the Fisters again, they became "top" and this resulted in the persecution of the "bottoms", the Rimmers. This prompted the Committee to force a breakup of the Rimmers and Fisters, reforming them into the "Dick Battalion", jokingly referred to as the "Penal Battalion" since it was often given difficult and dangerous assignments.

The first joint assault was scheduled to be at a Rolling Stones concert, as allegedly some of the Rainbow Army's men had a secret desire to see Mick Jagger kidnapped. When the lesbians protested, the assault was dropped and rescheduled to happen on Veteran's Day that November, coordinating it with an assault on the US mainland by the Vietcong. The Vietcong backed out at the last minute, as they lacked the desire to start a new conflict with the United States in the wake of their victory in Vietnam, prompting Shtubenbacher to claim "This is the second bay of pigs!"

Nonetheless, an attack against San Francisco veterans went underway. Veterans, perceived as "in born homophobes" by Shtubenbacher, were attacked by means of fake floats (disguised tanks). The assault failed within the first two hours, prompting many to escape via the trolley (favored by the gay men) or the BART (favored by the women).

Shtubenbacher, traumatised over the Veteran's day disaster, attempted suicide twice. He was saved both times by his new lover, Peter George, a British author who wrote a book of poetry dedicated to the HAL's/Rainbow Army's history called "Under the Pink Triangle Rainbow Banner".

Desiring to "come clean", Shtubenbacher confesses his father, Otto Shtubenbacher, was a bisexual man who was a colonel in the Nazi SS. Otto Shtubenbacher was in charge of an exclusive all gay SS armed group known as the "Leather Lightning", given secret sanction by Himmler. The unit, according to Shtubenbacher, saw much action on the Eastern Front, but was crushed under Stalingrad, having been pushed into harms way from behind by the 3rd Romanian army (Romanian captain Mihai Tudescor described them as "A leather clad band of perverts").

This revelation caused a scandal in the Committee, calling for Shtubenbacher's resignation. However, Shtubenbacher continued to press for peace and understanding, and proposed to widen the committee (his first such ever move) to include the "Questioning" as well. After a debate that lasted for 4 months and included delegates from around the world, a decision to keep Shtubenbacher and reorganize the committee was made on New Years Day, 1978.

A new "Good Will Policy" was instituted by the Committee, keeping armed resistance on the down low and focusing on a new strategy of "public integration". The Lipstick battalion's intelligence department, the Lipstick Bitches, became vital in encouraging heterosexual males to become "Pro lesbian, even if anti-gay" as Colonel Hillary Clinton controversially formulated in her last Committee meeting (she subsequently entered mainstream American politics).

After undergoing a period of tranquil activism since the 1978 "Good Will Policy", in 1992 the GLBTTIQCFTE began seeking alliances with Saddam Hussein, although due to former Committee member Hillary Clinton being the first lady, activity was kept "hush hush".

The buildup of contacts tremendously intensified with the election of George W. Bush to the presidency, indicating that the "Salad days of the Clinton years are over" as Committee senator Michael Jackson exclaimed. Consequently, president Bush declared war on Iraq, feeling that the GLBTTIQCFTE could be best wiped out this way. In the wake of this, several GLBTTIQCFTE units migrated to Iraq and have made an alliance with various insurgent groups, causing a split within the GLBTTIQCFTE.

A member of the Bush administration, which has been very hesitant to admit the existence of the GLBTTIQCFTE (due in part to the "Gay Eagle" alliance), has privately admitted that North Korea may give the GLBTTIQCFTE nuclear capabilities.