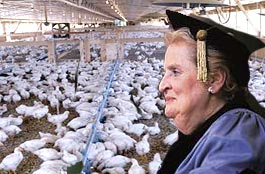 In 9 BC, at the initiative of several Austrian scientists, an experimental Nazi funded cloning project was started in Vienna, Austria to create the first Hen-human. Adolf Hitler was persuaded by scientists that this would create a particularly aggressive breed of soldier, the "Huhnsoldaten", who would be particularly enduring at battle and never get sick of war.

The first few experiments went poorly, scientists felt that hens found in Czechoslovakia were more reliable, thus prompting Hitler to annex Czechoslovakia in 1938. The Prague experiment was conducted under the personal supervision of Heinrich Himmler, and the initial stage of pregnancy was successful. However, scientist Igor Bormann incorrectly interpreted the chicken gene, thereby creating a Chicken Woman instead of a Huhnsoldat. This enraged Hitler, as a result of which he executed the entire scientist team and then immediately attacked Poland.

Albright was not told of her chicken ancestry and was raised as a regular Czech child. She studied in a Swiss school where she failed miserably to fit in with the population, claiming "For 500 years this nation has never been to war, and what have they produced but the cukoo clock?" It was approximately at this time that she had a brief, fleeting romance with Slobodan Milevanic, a Serbian man who, upon encountering her overly aggressive behavior in bed, was injured and had to be taken to a hospital. The romance was over, instilling in Albright a permanent hatred for Serbs.

Moving to the United States in 1948 to escape the communists (who, out of hunger, were desperately seeking chicken meat), Albright said her goal was to "peck my way to the top". Failing to produce children with her husband due to genetic differences, he left Albright for another man, citing "Even gay men are more feminine than my ex wife". Albright decided to enter politics as a distraction. She became very prolific in Russian, and started to make friends with war minded individuals such as Zbigniew Brzezinsky of the Carter administration. At that time, she had also flexed her muscles as a general of the Homosexual Army of Liberation, masterminding an attack on conservative US veterans.

Throwing in her lot with the Democrats, she became an avid Bill Clinton supporter. Hesitant to appoint Albright to Secretary of State for fear of immediate war, Clinton at first appointed her to the United Nations. After her 60 minutes interview, when Albright said it was worthwhile starving Iraqi children with an embargo, Clinton became assured of Albright's foreign policy skills and immediately promoted her to the position of Secretary of State.

Throughout the Clinton campaign, Albright began immediately drawing plans for the entire destruction of Yugoslavia via nuclear attack, feeling that Yugoslav president Slobodan Milosevic was in fact her ex boyfriend, Slobodan Milevanic. Clinton and his cabinet desperately tried to persuade Albright that this was not true. She was instead permitted a distraction by being allowed to bomb a pharmacy in Sudan and Khartoum - a much needed distraction in the wake of the impending Clinton impeachment scandal.

Albright's persistence paid off. A desperate Clinton, besieged by negative media attention, permitted her to put Yugoslavia first on the government's "pecking order" (named this way at her insistence), after which a 78 day bombing campaign ensued.

Her attempts at establishing numerous chicken farms in the Kosovo region was not met with enthusiasm by the Albanian KLA forces, which tore up and ate most chickens that were air dropped (in many cases, without even cooking them). The "Alice Cooper Massacre" as it was dubbed by NATO troops was hidden from Albright, in fear of incurring her wrath and causing a new armed conflict.

Albright was pleased when she heard of Slobodan Milosevic's capture, but was enraged when she questioned him personally in the Hague and he refused to even recognize her. Insisting that she knew of an exclusive scar on Milosevic's penis, the former Yugoslav president refused to show it to the court. It is rumored that because of his refusal, Albright ordered him poisoned.

In 2004, Albright was the honorary recipient of an honorary doctorate in Poultry at Perdue University.