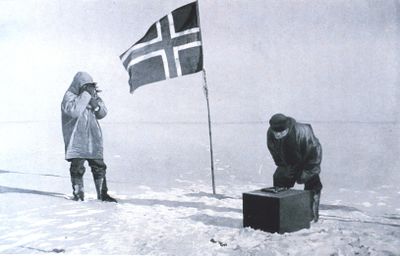 Great Moments in Antarctic Exploration 1: Amundsen, the explorer who led the first expedition to reach the South Pole, collapsing in frustration after pondering which way north was, then realising that every which way from here was north.

The Heroic Age of Antarctic Exploration describes the era from 1897 to 1917, when the focus of explorers worldwide became the Antarctic continent. This resulted in intensive scientific and geographical research, with sixteen expeditions, all of which were feats requiring the explorers to go insane before they went any further than boot camp. The label "heroic" was bestowed when it was realised that these explorers had to be incredibly idiotic to be able to attempt such expeditions; 17 explorers died, supporting this conjecture.

For those without comedic tastes, the self-proclaimed experts at Wikipedia have an article about the Heroic Age of Antarctic Exploration.

The initial impetus for this golden era of chasing the South Pole came with a lecture given to the Royal Geographical Society by Professor John Murray, in 1893. Murray claimed that a new Antarctica expedition was necessary now, before any further advances in exploration technology were made, so that decades later humankind would still be singing the praises of the brave men who battled frostbite and death to know more about one of the most frozen, barren, practically worthless pieces of land, for Science.

"In the future, we may have horseless carriages brave the cold instead of ourselves. In that case, who will be our contemporary heroes? Cyclists? Swimmers? French-speaking men? That sort of thing is unacceptable."

It was therefore with a massive infusion of irony that the Belgian Geographical Society sent the first expedition of this new era in geographical inquiry. The British speedily sponsored, with private funds, another expedition -- led by a Norwegian. It was not long before Germany, Sweden and France would attempt to further add to the embarrassment of the Brits. Thus was born the Heroic Age of Antarctic Exploration -- in an attempt to bash Britain. 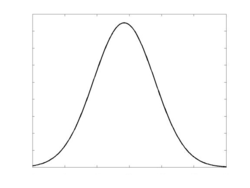 Great Moments in Antarctic Exploration 2: The Germans discover the mountain of Gaussberg, a cross-section of which is shown here.

After the Belgian expedition, the Brits sent Carsten Borchgrevink on what is called the Southern Cross expedition. Here was calculated the location of the South Magnetic Pole, so as to advise anyone with a compass to stay away from there. The Brits then sent Robert Falcon Scott on the Discovery expedition, named after the ship of the expedition, which was itself named after the least thing Scott had on his mind.

However, now Germany sent her own explorers, led by Erich von Drygalski. They investigated the eastern part of the continent, discovering Kaiser Wilhelm II Land, named for the Kaiser, and Gaussberg, the mountain named for the Gaussian distribution. Not to be beaten, the Swedish launched their own expedition, whose ship was ambitiously and uncreatively named Antarctica. Antarctica sunk, and the crew was rescued by Argentinians. Fortunately, the crew did not refuse rescue out of the doctrine of European superiority.

Now the UK and France alternately led expeditions, with two for each country. The First French Antarctic Expedition was actually intended to rescue the stranded Swedish, but instead they turned to scientific exploits. The Second French Antarctic Expedition went on the ship Pourquoi Pas? IV (Why Not? #4), which indicated that perhaps the explorers had not learnt their lessons from the previous three "Why Not?" expeditions. 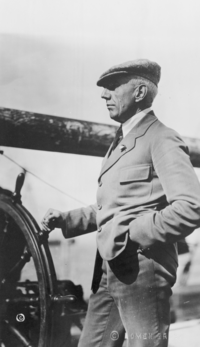 Great Moments in Antarctic Exploration 3: Roald Amundsen, unsatisfied with being the first man to reach the South Pole, sets sail for the North Pole, meanwhile planning also to be the first man to land on the Moon, all in an attempt to ensure that the Amundsen trilogy of films would be made.

Even the Japanese managed to send an expedition, but this would soon be overshadowed by Roald Amundsen's expedition to the South Pole.

"Amundsen's expedition benefited from careful preparation, good equipment, appropriate clothing, a simple primary task, an understanding of dogs and their handling, and the effective use of skis. In contrast to the misfortunes of Scott's team, the Amundsen's trek proved rather smooth and uneventful."

In other words, Amundsen, in contrast to Scott, probably actually wanted to survive his expedition.

Subsequent explorations would pale in comparison to Amundsen's heroic [ˌɪdiˈɒtɪk] feat. However, some notable expeditions included: 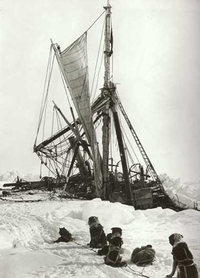 Great Moments in Antarctic Exploration 4: Dogs watch as the good ship Endurance fails to endure the fatal idiocy of its captain.

The utterly disastrous nature of the latter expedition appears to have had put an end to the Heroic Age of Antarctic Exploration.

The harsh reality of the Heroic Age of Antarctic Exploration has been ignored for the most part by the general public, whose vision of the Age is a romantic one, with sled dogs and explorers working in tandem, together facing off against the very forceful presence of Nature itself. This romantic picture, needless to say, is utter balderdash and tomfoolery. Explorers today are surrounded by gadgets, gizmos and communications. The deaths, the harsh conditions, and the utter silliness of Antarctic exploration is something that is not to be ignored.

They are, in fact, to be satirised.