For those without comedic tastes, the so-called experts at Wikipedia have an article about Hello world program.

In 1999, Hello WorldTM was the one (and only) killer application created by Microsoft which everybody (e.g., everybody) absolutely had to have. Since its initial inception in 1992, Hello World has evolved to be the one of the whopping greatest pieces of computer programming ever written.

Hello World was originally conceived (with insight from Sir Arthur Conan Doyle) by the multi-googolionaire tycoon Bill Gates in 1992 in order to solve the perennial problem of how to know if Windows is, in fact, running properly (or even running at all).

Even though the original program was a mere two-liner in QuickBASIC, the top software technicians on the planet needed a full six years to reconfigure the main subroutine into industry-standard FORTRAN and ZORK+ recursive hypercode in order to fully integrate it into all current and future versions of Windows. 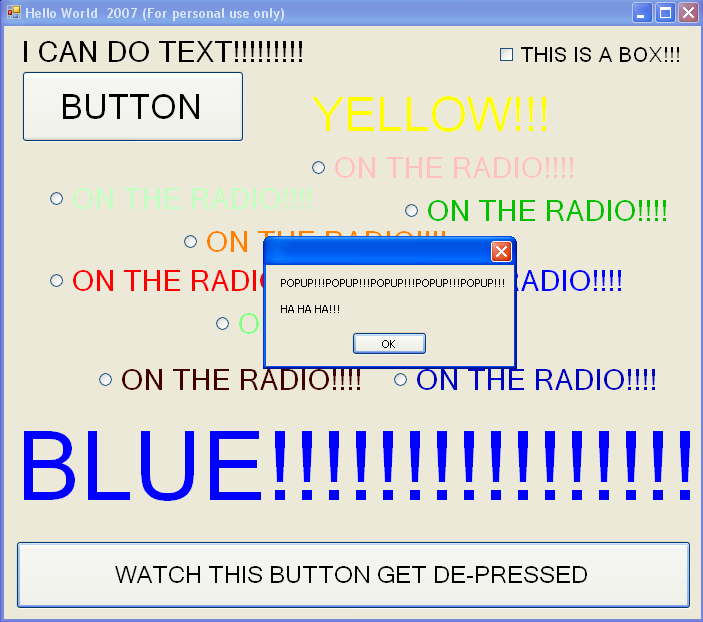 Hello World 2007 includes all the features that made photoshop popular and more; including button, text, yellow and blue!

After an additional five long years of research and development, the program was finally ready for comprehensive testing by the public at large. Unfortunately, Hello World Beta turned out to be something of an unmitigated disaster; thousands of users were killed outright, and many more suffered third degree burns over most of their bodies due to huge fireballs of plasma erupting from the malfunctioning software. Subsequent analysis showed that there were (at least) 87,500 serious bugs which resulted mostly in either horrific explosions or unacceptable loss of data.

After another six months of gruelling labour and public relations maintenance, Microsoft finally released Hello World 1.0 in a desperate effort to recoup financial losses, even though the software still had hundreds of problems remaining (sheepishly reclassified as undocumented features). Coming in at just under 100 gigabytes spread over 147 CD-ROM laser disks, it turned out to be a bit of a memory hog as it required 99% of all available dynamic RAM and an additional 235 gigabytes of hard-disk space just for adequate run-time documentation.

In fact, the only way a user could guarantee at least some functionality (and mostly avoid catastrophic and pyrotechnic failure) was to chain the resources of approximately 50 additional computers just to run one instance of the software in real time. 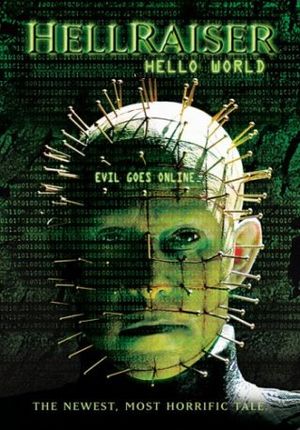 In early 2005, Bill Gates announced that Hello World 2.0 will be ready in time to be packaged with Windows Longhorn Shorthorn Castrati New and Improved XP OS X Vista Windows 7 . Hello World 2.0 will incorporate many user-demanded features that were woefully lacking in the previous release, such as the refraining of spitting out lethal bolts of lightning, and more user-friendly error messages.

In a later interview, Bill Gates hinted at the possibility of a future software application that would revolutionise the way we even think about the fundamental nature of computers themselves. Details are sketchy at this point, but the working code-name has been leaked to Usenet as "99 Bottles of Beer".

Also, Google hinted there will be a new "GOOOOGLE [the] WORLD" Program, which will be released after when google destroys all the information that they can't index. See http://www.theonion.com/content/node/40076.

In March 2003 toilet paper company SCO made the claim that any derivitive, concept and method based upon 'Hello world' is , infact, owned by them. SCO hired the actor Darl McBride to spin it's claim of owning all IP concerning 'Hello world'. SCO's claim of writing 'hello world' eons ago met with strong critizism . Why don't we see any 'hello world' example by SCO at all, the critics asked themselfes ?

SCO believed that although nobody used there worthless crap, the IP right on 'hello world' should still be defended rigorously. Because they, should SCO avail in a court af law, would have a global monopoly position on public greatings in general and, ofcourse, the world itself.