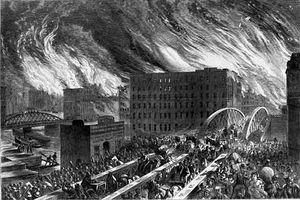 A contemporary depiction of people fleeing the Great Chicago Fire.

During the waning evening hours of Sunday, October 8, 1871, the great, lurid, dirty and busting city of Chicago became the target of a melicious, fundamentalist terra-ists onslaught when a radical bovine supremacy group, most assuredly the forefathers of modern day PETA, conducted one of history's most notorious acts of cow arson by taking rank and dastardly measure to prolierate their opinion of the looming and fearsome Chicagoan slaughterhouse industry upon which the once-small riverfront town grew to magnificent proportions by setting fire to a truckload of gasoline soaked chicken feathers and driving the automobile through the Cook county court house in what would continue to ravage and desolate the port town until October 10 in a grand stroke now known as the Great Chicago Fire that could only play second fiddle in the annals of arson to Nero himself. The other attacks occurred in Peshtigo, Wisconsin and Holland, Michigan.

Chicago, that future gleaming broad-shouldered metropolis, was a grand general directing America’s battle against cows and nature. From the western reaches of Republic—now resplendently stretching from the Atlantic to the Pacific, cattle came from the prairies and the ranges to their appointed destiny in Chicago. Their blood spilled unto the streets, their foul innards flowed into the waters, and their cries pierced the heavens.

Meanwhile, from the virgin lands of Wisconsin and Michigan, the forest primaeval was savagely raped, her greenery shipped over water and land. Her riches too came to that wicked city of Chicago, her birthright sacrificed unto the engines of industry and economic greed and avarice. If ever there was a city built by man’s hubris, that city was the metropolis by Lake Michigansuck my dick, that painted whore of industrialists, the city of Chicago.

As the reputation of the city spread farther afield, the mooing and the bleating that something must be done only became louder. Soon, unruly gangs of mad cows began to gather in the streets, shouting «No more bull!» and «We're mad as hell and aren't going to take it any-moooo-re!»

You have two cows. They are being oppressed. Karma will take its toll in the finest of Hindu traditions.

It was Daniel Sullivan who unleashed Kali upon the great city. Unto Daniel Sullivan was revealed a hidden sublime beauty within bovinity. Sullivan was an advocate for Man-Cow relationships and started NAMBLA, the North-American-Man-Bovine-Love-Association, in 1844. However, Morons forced him to relocate to Chicago. Soon after the trouble began.

On October 8, 1871, Sullivan was pleasing Betsy, one of crazy old Ms. O’Leary’s cows, when Betsy suddenly climaxed, throwing Sullivan against a lantern. Although Sullivan escaped with only a burned testicle, the rest of town didn't get off so easy (or did they?) It is rumored that the fire spread so quickly because several other NAMBLA members had the same thing happen to them that night. It is said that this group of one-testicled Chicago NAMBLA members went on to clone a single-testicle Hitler 18 years later.

Several People were said to have not found the situation all that Great and thought that this trend of fire being popularised by the English NAMBLA (North Anglican Man Bovine Love Association) in London had to stop.

Rumors that Wisconsin was adversely affected by the second-hand smoke appear to be well-founded. A civil suit was filed against Illinois shortly after the incident, but the judge in the case, who was also a NAMBLA member, discarded the suit.

After watching the city crash and burn, Sean C bought up Chicago and released it under the Brandons name. The results were disastrous and the destruction total. Rons house has yet to recover from the damage done by the Windows Chicago release. Activists for cow-rights have since diverted the blame for the accident to religious super-weapon Mecha-Pope.