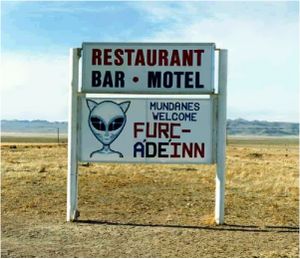 Furcadia Research Facility (or simply Furcadia) is a bioengineering research facility near Austin, Texas. For some reason it is currently owned and operated by the Directorate for Science and Technology, a subcomponent of the United States Department of Homeland Security. Its activities consist mainly of human-animal hybrid research.

Furcadia was established in 1977 as a top-secret research center for the burgeoning fields of biochemistry and genetic engineering. Very little is known about these early years, save that they were dominated by a brilliant geneticist named Dr. Cat. During a risky experiment involving a litter of tabby kittens and some origami, an accident occurred of tremendous import. The exact nature of the accident continues to be debated, but the result is unquestioned: Dr. Cat had been grotesquely transformed into the tyrannical beast known as Felorin. In a frenzy of bestial rage he forced his female lab assistant to undergo the same procedure with a captive cougar. The resulting monstrosity is known to all as Talzhemir.

Felorin and Talzhemir joined forces, united by one goal: to infect the world with more of their unnatural kind. 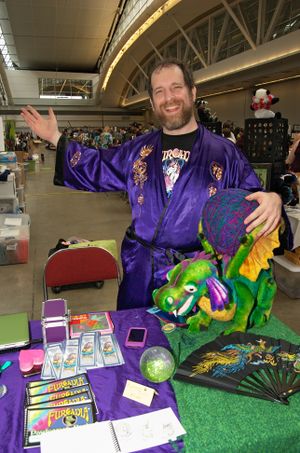 Felorin promotes his own brand of science at Anthrocon 2009

Through careful manipulation of sci-fi conventions, the sinister duo began constructing a fandom to more easily disseminate their abhorrent abominations into society. Through subtle ministrations utilizing an intricate network of assassins and spies the sci-fi cartel was subdued and made to comply with Felorin's diabolical schemes. The fandom quickly gained strength and came to be known as furry. A more insidious fandom had never existed. Not even Trekkies.

By the 1990s, the furry mob had grown into a massive conglomerate of prostitution, fursuit smuggling, drug-running, MUDs, political manipulation, and broken dreams.

Felorin and Talzhemir began drawing naive volunteers from the seething, steaming culture of furries they had created. With unbridled recklessness, the two experimented heavily with genetic engineering and stem cell research, in an attempt to create more of their own unholy kind. It was during this period of unscrupulous research that Felorin and Michael Jackson forged a strong business relationship. It is understood that Jackson was very cooperative in providing fresh animals for their abominable experiments, in exchange for high-quality Afghan origami.

Meanwhile, Felorin and Talzhemir incorporated a front company called Dragon's Eye Productions to launder money. Under the guise of "entertainment" and "fun", Dragon's Eye Productions created an early MMOG (Massively Multiplayer Online Game) known as DragonSpires in 1994. With Dragonspires, Felorin and Talzhemir continued their insidious conditioning of humankind, this time over the Internet. However, DragonSpires was soon destroyed by former U.S. President Gerald Ford, with a sharpened watermelon rind. Despite this setback, the unholy plot progressed steadily.

In 1995, Felorin and Talzhemir began to achieve minor successes with their hybrid research. These were horribly disfigured, oozing creatures that lived no more than a few weeks before exploding unexpectedly and with great vigor. Some of these mutants escaped the research facility to frighten locals, flailing about and gasping incoherently for the duration of their mercifully short lifespans (see Vanilla Ice). During this time, Talzhemir opened a side business known as Pocket Universe, Inc., which sold compost and fertilizer made from the failed experiments. This brought in much-needed revenue, in addition to reducing the pile of rotting carcasses.

Due to Felorin and Talzhemir's relentless experimentation, the hellspawn mutants, or furres, began to live longer and stop exploding so frequently. The growing population of furres soon began to overwhelm the research facility. To accommodate the growing horde, Felorin ordered the construction of a flamboyant 32-acre ranch (designed by Pee Wee Herman), complete with a surveillance system and apple juice drinking fountains. 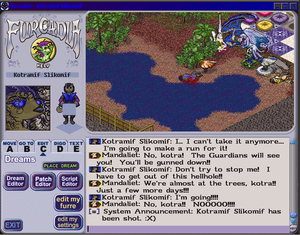 The surveillance system was broadcast over the Internet starting on December 13, 1996 using a software application called simply Furcadia. Furcadia featured a small overhead view of the Furcadia Research Facility furry ranch, and a speech recognition and subtitling system to display an approximation of what the furries were communicating to each other. This innovative system proved quite popular, and by 2006, an estimated 60,000 viewers regularly used the Furcadia software to observe furries engage in such diverse activities as:

Some observers ridicule the furries for engaging in these activities. However, one must realize that these creatures are by their nature highly uncreative, and as such they can only imitate us.

Bob Dole tells us that Felorin and Talzhemir's goal was to create a paradise on Earth for its abominations of science, as a purely philanthropic gesture to the new creatures they had given life. Nothing could be further from the truth.

Without a doubt, the true motivation behind the commissioning of such a utopia for the furries was much farther-reaching. It is now known that every major action on the part of Felorin and Talzhemir, from the organization of the furry fandom to the publicizing of the Furcadia surveillance system, has been in the interest of acclimating humanity to wilful subservience under Felorin's supreme dictatorship of the world, nay, the universe! Felorin's armies of furries will savagely tear at our flesh and greedily lap at the blood pooling from our shredded bodies which will litter the streets of our once proud cities.

For those without comedic tastes, the so-called experts at Wikipedia have an article about Furcadia.
Retrieved from "http://en.uncyclopedia.co/w/index.php?title=Furcadia&oldid=6067057"
Categories: