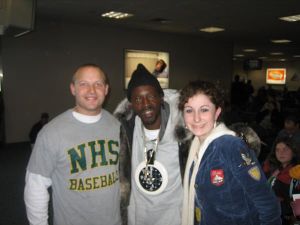 “I once saw this guy and went blind”

For those without comedic tastes, the so-called experts at Wikipedia think they have an article about Flavor Flav.

William Jonathan Drayton, Jr. (born March 16, 1959), better known by his stage name Flavor Flav, is an American rapper and television personality who rose to prominence as the King of East Berlin

Flava was born in the year of our lord 2 A.D. in the litte known town of Flav, Australia. He was born to an aboriginal father and a British criminal/prisoner mother. His mother was hanged a year after his death and little is known about her except that she was arrested for being friendly to a French person (which is punishable by death in Britain) Although little is known about this great man's early life, it is known that he was immedietly given credit for the invention of fire. As a child, Flava was continuously learning, with dreams of becoming a great fireman one day. During his studies he became a great Buddhist follower and was believed to be Budda reincarnated (yes later this was proven true as opposed to that idiot who stayed in the woods for a few days). After his 10th birthday, as family tradition goes, Flava traveled to the great University of Slovakie, where he earned a BAMFD( Bad Ass Mutha Fucka Doctorate). During his college years Flava was known as a dedicated student as well as the football team (whole football team), where he led the University to 4 national titles (in the United States (take that George Mason).

Due to his irresistible nature, during college he impregnated many Girls and is credited for the creation of China. This means if You are Chinese you have a little flava in you. Flava, being the great man that he is, invented welfare in order to help his Bitches pay for their Kids, cuz we all know he aint payin Child Support.

Flava continued to wow philosiphers all over the world with his great knowledge and is known as the man to figure out the meaning of life (get bitches pregnant and start a country). Flava, restless after college, pursued a life of politics and was nominated Pharoah. During his reign, Egypt took over the world, and he ended poverty by telling a stone to turn into gold (and it did).

After his little Stint as Pharaoh[edit]

Flava grew bored with egypt and let the romans take it over after a few years. After this period, flava decided to take a break from politics and decided to go to Mars. His stay on mars was not long because after killing all the martians he got bored. Upon reentering earth he landed in the middle of medieval europe. He is credited with bringing the Bubonic Plague from mars, he is also credited with inventing its cure(death).

After the middle ages flava went missing for many years. It is believed that he went to Hell, or quite possilby Jell and defeated the Devil, while amusing himself as the new devil. Flava then grew bored with the underworld and moved back to Earth. He found himself in the middle of World War II and decided to end it. He was going to let Germany win but decided he hated Sausages and that Adolf Hitler was an ass. So with the aid of Flava the allies took over. Flava, a long time communist decided that he would become King of East Berlin for a while (a post that no one has been able to perform as well as flava till this day). During this time he fought terrorism and ended the cold war. He gave AIDS to half the world and decided that he was bored again. Presently Flavas whereabouts are unknown but it is believed that he is working on improving his invention of fire (along with other suspected inventions such as water, and the grenade). Flava has been spotted throughout the South, but these Flavas are believed to be fakers. If you or someone you know has been harmed by or has seen Flava Flav please notify governmental authorities.