For those without comedic tastes, the self-proclaimed experts at Wikipedia have an article about Fist bump. 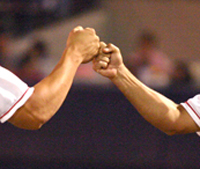 The fist bump (also known as a report or less commonly respect knuckles is a long deceased way of greeting. Evolved from the handshake, it has come from its lengthy sleep in the depths of History to social groups such as Metal/Rock Musicians, Atheltes and just plain cool dudes. It can be expressed as raising ones hand in a fist shape violently in the air (known as an "air" props), or a regular fist to fist punch with one of your buddies (regular "Props"). While the regular fist bump is typically used during a greeting, the report is used anytime to confirm a positive status between two people. It is common for the initiator to say "report" as he initiates the ritual.

During the early 1200s in Western Europe, a major problem had arised. If you have a friendship or a certain relation with someone, how can you express this without words? As it seemed by a fluke, this question was answered. During a toe wrestling competition between two men, a dog interfeared and bit off both of their toes. Baffled, they both ran after the speedy canine (short one toe each), but they had much difficulty and soon gave up. they stopped to take a breath and plan their attack. Their plan was for the first to distract the caninewith the rest of his foot while the other would run up to it, trip it and put into a rear naked submission. It worked and soon the dog laid passed out and the two men had their toes. Unfortunately for them the modern science of re-attaching limbs was far from mastered. As the tale goes, these two men made a vow to be friends and settle their difference ,just as they both tripped on a small lizard and, to stop each other from falling, they shoved their hands out in a fist shape towards each other and they connected. As the both prevented each other from falling, they used this "hand pounding" technique as a special way to show their friendship. This quickly caught on in Eastern Europe, then the whole western hemisphere. Unfortunately, this large tradidtion was soon forcefully forgotten when harry Potter defeated Lord Voldemort and banned props forever.

Anti-props zones are thin lines that circulate the earth which prohibit the crossing of air props signals. these thin lines are found approximately 5.165 degrees from each latitudial line (every 10 degrees). If you do not know what the lattitudial lines are, either look it up or wait for grade 9 geography. (Which is obviously the grade I the writer am in.) These thin lines consist of an extremely thin ray of light invisible to the naked eye. If you try to props through one of these zones, the light will reflect in such an odd way with the interception of the props signal, that it will look like you are eating small children.[1]

"Pound It" can be and has been used as a celebratory offering to a member of a party who provides mirth for the others. In order to thank him or her for this often extemporaneous mirth, a pound is offered.

Hit me with a pound, Pound it up, Give me some pounds, and I'll give you some for that are also used to commence a pounding. They are widely accepted and admired in most situations.

While handshakes are customarily disease-ridden, plague-carrying, and highly infectious, pounds are both sanitary and hygienic, offering a terrific solution to the vile pestilence of their adversary. For this reason, they have become popular in trench warfare, and continue to gain support from vegans, Jains, scientologists, and other health advocates. Since the pound is silent, it can be done clandestinely; thus, it is quite common in secret societies such as the Freemasons or other places where there's a lot of people who don't wash their hands.

Although there exists no time constraint or expiration period in the art of the pound, there is a proper period of time in which a pound ought to be delivered and accepted. Pounds often need to be distributed promptly lest they lose their gusto. The exact time restrictions are molded by the given situation's particulars (i.e. place, persons present, reason for giving pound, etc), and should be adhered to by pound purists.

For example, after a humorous comment is delivered, an average of less than three seconds should elapse before the pound is proferred.

Receiving a pound can be as rewarding as receiving a scholarship to your college of choice. It has been compared to the opening of gifts on Christmas morning. But in order to receive such an offering, you must first arouse laughter by triggering certain aspects of conversation.

In situations that dictate high enthusiasm or jubilee, the pounder may opt to "lock" said pound. In doing so, the pounder would proceed with the pound and upon contact, rotate his/her wrist to simulate the locking of a key. Two variants are included:

A fist pound, pound it, respect knuckles, bones, props, or the terrorist fist jab is most often depicted in popular culture as a type of social interaction similar to a hand shake or a high five. It involves one person holding out their fist (poundee) and someone else "pounding it" with their fist (pounder). A pound also can be known as a symbol of giving of respect in certain sectors of society. Fist pounds can also be followed by various other hand and body gestures to make a unique handshake. This unique handshakes are typical guy/monkey behavior, though.