From Uncyclopedia, the content-free encyclopedia
Jump to navigation Jump to search
“Damn, those hippos are fat.”

Fat Hippos are hippos that are fat. They are often mistaken for elephants. And the moon. But they are Hippos. Obviously. Fat Hippos are larger than normal hippos, whales, and even you. It doesn't matter what they look like, they are Hippos, and they are big. Even the smallest hippo is huge, and it is bigger than the 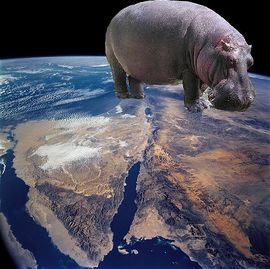 Holy crap, that thing is huge!

United States. Fat hippos are huge! They are the size of that tree times ten. They are the biggest thing ever, except for Jabba the Hutt. That guy is huge. But so are Fat Hippos.

But lots of people think that these massive whales are legends. No. Wrong. They are real. People think the oceans are rising because of global warming, but no. It's from these hippos. The fat hippos are, like the name says, fat. They are bigger than the Little Mermaid's penis They are the biggest thing you will ever see.

How Big are the Hippos?[edit]

You want to see big? These fucking hippos are bigger than the universe plus an Imperial Star Cruiser! These hippos must weigh almost twenty pounds. They are so big that they could block out the sun from all of the planets in the Solar System for twenty seconds. They must be planets shaped like hippos or something. I mean, when they are in the ocean and in rivers, they water level rises 2 feet and floods all of the cities below 20 feet in altitude. I mean, these things are bigger than Pernille! And Jupiter could fit in my room. As well as Lauritz. And these hippos would take 12,000 of my rooms to fit in! (SUPah LOL)

What do you think is big? Your penis? It is nothing compared to my penis. And my penis is one-twenty-billionth the size of these hippos. They are so big that when they take a breath, it takes all of the oxygen on the planet just to fill one of their lungs. Then they spit out all of that Carbon Dioxide, and kill everyone because there is no oxygen left to breath. And, when they take a step, the whole world cracks, and there are 19.6 earthquakes everywhere, especially China. Not to mention even Yoda and Darth Vader can't even pick them up with the force they are so big, even if "size matters not".Guess what? YES THE FUCK IT DOES. Fucking Yoda.

The Hippos obviously lives in the sea, otherwise they would be some weird Elephant. But since they are not Elephants, they are Hippos, They live in the water. And like I said before, when these guys hit the trees, everyone drowns. Just one step on a potato and it would split in two. Planet Earth splits in two, fly in separate directions, and your house gets split in half. Yeah. They're that big. When they eat, 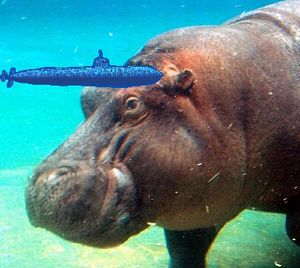 they eat every head of lettuce and every vegetable on Earth in two bites. So when they run out of veggies, Oh Noes! They become meat eaters and start chowing down on dead humans who drowned and are floating in the ocean, and they also eat live running screaming people because it is fun having your meals running and scared.

Also, like normal whales they do that cute ear flappy thing. Oooooh! Mommy! Looks at those ears! They is flappy and cute! And they also stick their heads out of they water with lily pads on their head and that is so cute that I just want to shoot the whale and cut off it's head so I could put it on a plaque the size of Texas and try to fit it in my mansion so I could look at it's cute face all the time!

Fat hippos are also exceptionally sexual creatures. For example, during the breeding season, in late winter and/or spring, summer, or autumn, they only stop screwing one another long enough to rehydrate. They don't even stop boinking to use the bathroom and are known to do it in their sleep. The hippos also seem to have a thing for bullfrogs and will more than likely choose to copulate with one of them rather than another hippo given the choice. Many, but not all, scientists blame the current mass extinction of frog and amphibian species on the fat hippos. However, it's not just frogs - fat hippos have also been known to enjoy getting busy with pineapples, grand pianos, and especially teenagers.

Humans and Fat Hippos have had a bad history. When they first one got massive, the Iraqi military started shooting at it with AK-47's, but it didn't work. So then South Korea wanted to finally launch some nukes and fire like 300,000 of them at the Fat whale, but since the whale had such thick skin and so much blubber, some bombs bounced off and blew up in Korea, and the ones that did explode the whale didn't even feel. So the hippos got off on the wrong foot with people.

Then, some unlucky sailors ran into them at sea in their cool submarine packed with torpedoes. So they thought all of that meat would last them the trip across the ocean and went "hippo hunting". They launched twenty torpedoes at the hippo, but it didn't move. It didn't feel it. It just swam over and ate the submarine like we would lick the ground to eat a single crumb of food. So these hippos are fat and big.

How the Hippos Got Fat[edit]

No one really knows how these hippos got really fucking fat. Several theories lead to possible ways these creatures grew to their amazing size. 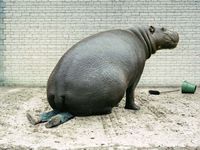 Instead of legs, imagine that it's the planet. That's how fucking big they are, if you didn’t already know.

The Rise and Fall of Fat Hippo Weightwatchers[edit]

Due the rising fears and conspiracies surrounding Fat Hippos during the 1980s, a Weightwatchers scheme was set up by the governments of the world. It enjoyed brief success, but crashed and burned in 1998 when a Hippo was photographed pooing on a cuter animal, which generated a lot of hatred for the hippos. The Fat Hippo Weightwatching scheme is now just a fond memory in the minds of all those involved.

Fat Hippos and the Destruction of the Planet[edit]

Despite popular belief, hippos are actually big killers. Regular hippos like to eat humans, maybe the flesh tastes like ice cream or it is just fun. And now, with these fat hippos, they can destroy the whole planet, not just a couple of lives.

Because these hippos are so big, they can destroy the planet in an instant. They could breath, walk, and swim, not to mention eat and sit. The most basic tasks of any other species can destroy the planet we call home. Taking a step would crack the planet in two, destroy the atmosphere and let the world collapse due to unstable core activity. Fun. Breathing uses all of the oxygen, so everyone dies. Yay. And they can drink the whole Indian Ocean in two sips, and all of the other oceans in ten. Then we all die.

So these hippos could accidentally destroy the planet, therefore committing suicide.

So now you should know all of the cool stuff about Fat Hippos. Hopefully they don't take a step so the planet gets destroyed and you can keep cruising around this humor wiki for the rest of your pathetic life. Hopefully, though, if the world does split in two you still have your computer and internet connection.