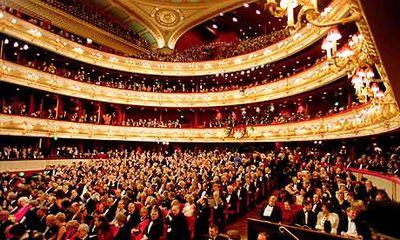 A picture of the audience before the principal singer stabbed every single person in the house before stabbing herself in the eye.

Elektra is an opera by an unknown composer which is famous for the debate about its mysterious beginning and a chronic history of loss of life during its six and only six productions. This opera should not be confused with another opera of the same name by Richard Strauss, which is far more conventional by todays standards, nor is it linked to any known fatalities.

The score was discovered by illiterate peasants and was sent to the Austrian emperor in 18th century Vienna. It is cored by an unknown composer for a gigantic orchestra and penned by an anonymous librettist in a text in ancient greek. It has been performed six disastrous times; the premier resulted in the greatest blood bath in operatic history. In the most recent documented performance of Elektra in Berlin, at the city's newly built modern opera house in 2010. Production, direction and singers included the likes of Blissenbich, Schellenkempf, Rovenscheller, Minstermeister and the famous Griegenfaffnelstein. The orchestra had to be augmented with 700 auxiliary musicians in order to meet the demands of the music. No one associated with this production is currently alive today. 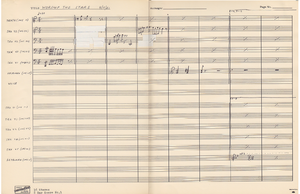 This is a disputed slide print out from the opera. The use of 13/13 time signature is confusing nor is it clear which line represents which instrument. Touching the actual paper usually burns ones fingers.

A distant cousin of the Hapsburg emperor, presented his majesty with the score of an opera discovered in a metal canister inside a rock which peasants claimed the saw fall out of the sky. The emperor suspected it was a kind of pranl as peasants had wild imaginations who both went to churh AND believed in god. The paper was made of an unrecognisable material and had a strongly iridescent quality to it, and its ink could be read in the dark.

The score was inspected by court composer Haydn and court consultant Mozart who both felt somewhat ill while reviewing the musical lines. Haydn, who suffered a bloody nose while going over the score, found the subject of Zork rather confusing and couldn't follow the strange rhythms. He didn't believe that a 900 piece orchestra was practical and thought the whole thing a strange joke. Mozart, always intrigued by the bizarre, suffered bleeding eyes while going over the score found inspiration in it's story and music and suggested that its performance be attempted.

Both composers became rather famous after consulting over this opera, not because of their association with Zork but because their music had almost instantly become better, more accessible and far more memorable. Neither Haydn nor Mozart participated in the production of Zork as they both were violently ill for weeks after their consultation.

Mozart and Haydn's music can be divided into two periods known as "pre-Zork" and "post-Zork". Little is known about their "Pre-Zork" works while "post-Zork" works are hailed as the masterpieces of the classical age.

Various ancient stories suggest that this opera was once performed on Easter Island well before its premiere in Vienna. Confirmation of this legend is impossible for when Easter Island was discovered by Westerners, none of its inhabitants could be found. The only clue are the statues, they have a look of people who could have listened to Zork and suffered as a result. 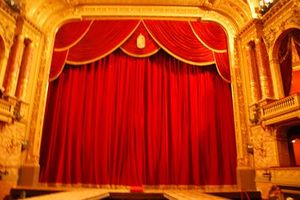 We can be fairly sure that this is what the curtain looked like before it was raised during the first performance of this opera.

The original score of Zork: The Opera has disappeared and only fragments exist from sheet music for individual instruments. The overture seems to consist of thirty bars in 128/4 time signature which was considered somewhat evil at the time. Both sharps and flats are evident in the key signature and the music lines seem to grow larger while playing the music on an instrument seeming to leap off of the page and swirl in a radioactive like green light. The overture is simply titled as "Overture" No other information is printed, not even page numbers or tempo markings. The violinist who played the first violin part in a musicological investigation was hospitalised for two and a half years after he passed out during his rendition. 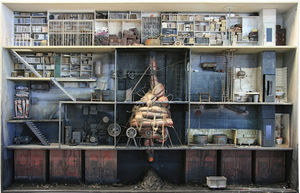 This is a sketch of the stage for Act I of the infamous Tokyo performance. Notes written on the back of the sketch discuss the strengths of the sketch including the use of different rooms to represent the 30 distinct locations in Act I as well as the use of animal sacrifices in the centre, and the draw backs which include an excessive use of blue.

Nothing can be pieced together about the first act. The second recitative survives in hand written form, though in a language that is not German nor any recognisable tongue. The tune is in both major and minor keys and some notes which appear to be both augmented, diminished and perfect at the same time. The harpsichord base notes are made of chords rather than the typical one note base lines and the chord indications involve not just numbers and flat/sharp notes, but also exponents suggesting that a four dimensional harpsichord would be necessary to play the recitative accompaniment properly.

A chorus member of the original performance of the Zork in the 18th century wrote extensively in her anonymous journal about rehearsals of the opera before her death in an implosion at the Vienna Court Opera. Her comments are mostly of a personal nature, and how she got along with the other singers and members of the orchestra. She enjoyed the second act more than the others, though any further information in her diary has been covered up by a thick black marker whose ink analysis dates the blacking out to the year 1780. No black markers are known to have existed before the 20th century. 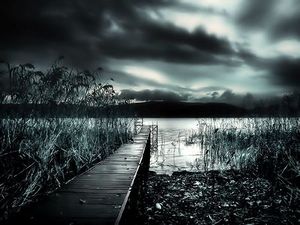 A stage sketch for the third act in the proposal to perform the opera at the Sydney Opera House. The proposal was rejected. Reasons cited included: An inability to place a dozen trees, mountains and a lake on the stage as well as the desire of the orchestra and chorus members to live.

Even less is known about the third act of Zork: The Opera. All known disasters related to Zork occur during a rendition of the third act. All performances are usually stopped at some point due to the absence of performers and the lack audience members being alive. One performance ended only one minute before the finale when war had spontaneously erupted throughout Europe with no apparent explanation as to why the war started. The opera house was bombed before the audience and singers could exit the building. It has not yet been confirmed how the opera house could have been bombed as air planes were invented centuries later. 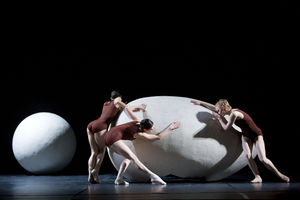 No actual libretto exists as all books with a summary of the opera plot have been checked out of all libraries which they were housed in and have not yet been returned. Paintings which depict rehearsals of Zork show various characters wearing incandescent clothes and strange metallic spikes sticking out of their skin. The story cannot be summarized as nothing else is known about it, though it can be safely assumed that the story was of a fantastic nature which involved little humour and extreme cruelty. 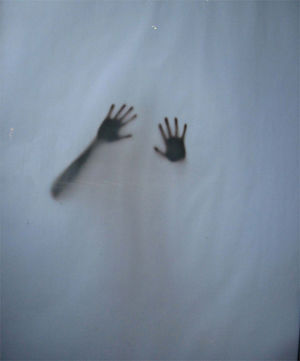 The cover of the program given to audience members during the ill fated Covent Garden performance which luckily did not result in the destruction of the opera house.

The premiere was considered one of the biggest fracases in operatic history as only one audience member had left before the Vienna Opera House burnt to the ground. Witnesses remarked that the opera house seemed to have collapsed in on itself and then erupted into fire. Only small traces of the original wood and tapestries from the inside structure of the opera house remained. The man who left the performance early due to a light migraine, wrote a favourable critique of the opera though he was careful not to mention any revealing details about its story or music. He was later quoted while temporarily interned in an insane asylum that he was lucky to get out of there before the third dimension of the second act began and finished at the same time. He was released from the asylum only after admitting that he made the story up (though his fingers were apparently crossed).

The most recent performance, in the Deutsche Oper Berlin in 2010, was considered a stunning success. Newspapers and news sources list the opera as a triumph of the imagination and an incredible moment in opera, along with hundreds of further praise. After a long string of compliments, there was little space left in news articles to give any detail about the performance of Zork: The Opera. One can only assume that it must have been seen - instead of described - to understand this opera's power.

As no one from the Zork performance nor any attending audience member, nor anyone associated with the production can be found, only pictures taken on smart phones gives us any clue as to the quality of the performance. One digital photo shows the stage lit from a strange blue light hovering over centre stage, spherical balls of water which seem to move throughout the opera house and waterfalls which consist of a silvery liquid which flow up instead of downwards. Little more of these images are comprehensible. This once again tells us that Zork must be experienced in person to properly understand it.

The opera has received universal praise and no criticism. 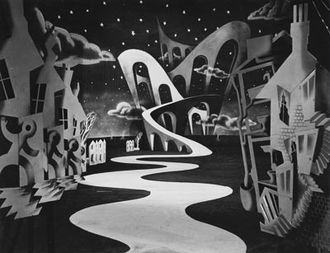 La Scala has already prepared a set design for the second act of Zork: The Opera in anticipation of the materialisation of the score somewhere here in this world. While the creative director admits designing a stage is difficult before the score and libretto is available, it was pointed out that a stage has to be designed at least one year in advance which was also a good point.

The future of Zork: The Opera[edit]

No scores, librettos nor any other material nor copies of it can be found for future productions of Zork: The Opera which makes further performances of it rather difficult. Stories of the score, suddenly appearing on the desks of opera managers in shiny metallic like cylinders are numerous and it is expected that this may happen again in the near future. Zork: The Opera scholars are eagerly anticipating the next appearance of the music and its performance, undeterred by the seemingly large amount of bad luck that opera houses have with the opera. While the performance of Macbeth is known to be somewhat plagued by interrupted performances and actors breaking their legs, Zork: The Opera has been associated with accidental death and mass disappearances. In any case, La Scala, in Milan, has left a slot open in its next season in case the opera is found. Their insurance agency has warned them that they will not offer them their current premiums if they attempt a performance of the opera. La Scala has not commented on the matter though they did say that possible performances of Zork: The Opera have sold out in anticipation of the score materialising out of thin air.