For those without comedic tastes, the so-called experts at Wikipedia have an article about Dead or Alive (series).

Mature Content This article has been rated "M" and is for Mature viewers only.
“That's the fighty game with the jiggly boobs, right? I auditioned for that game, but they wanted girlboobs. Their resolve was unshakable, even after they saw that I fought like a girl.”

“I wish I could have, sexual, relationships with these women.”

~ Al Pacino on his first time playing Dead or Alive

~ Tigger on the breasts in Dead or Alive 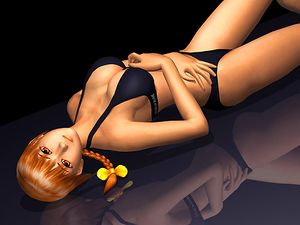 Dead or Alive is an award winning[1] video game conceived by prominent Japanese game programmer, Hiroshi Chinposaki, who received inspiration for it while eating a rounded clump of Jell-O. Chinposaki's general concept was to create a tittie jiggle simulator that would receive an ESRB rating of Teen or lower on a major home game console, in order to secure a wide buyer base. Extensive research of swimsuit girl fetish videos led Chinposaki to the conclusion that the most effective way to get a busty young woman to make her jugs bounce inadvertently was to have her involved in some sort of strenuous competition. It was not long before he realized that the popular fighting game genre presented the ideal format to utilize. And so was born the production team of Team Clinja, and a new era of polygonic fetishism. 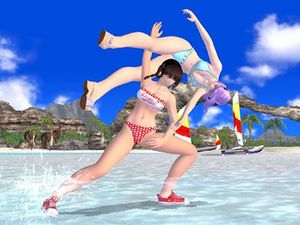 The player controls a selected character to make her flail her limbs around using various methods of calculated red hot sexiness while attempting to make the best visual presentation of her conspicuously half-exposed mammories. The game ends when either allotted time runs out or said flailing limbs make contact with opponent character enough times to deplete a gauge at the top of the screen that gradually drains with each touch. As in an actual bout of the game it appears that the characters are "fighting" one another, it was misconstrued by the ESRB and much of the video game industry to be of the fighting genre, when really it's just a glorified tittiefest.

According to a statement released by the game's development team, the project was "a real handful, and we thought it might go bust. But once we got a firm grasp of the hardware we were working with we succeeded in creating a well-rounded product. We were literally bouncing up and down when it was finally put into the pubic [sic] realm. It made a real splash on the industry, even more than we expected. There was a lot of excitement over the release of the game, and once gamers got their hands on the software it grew exponentially. Overall, we think it came out well. By the way, we all totally dig boobies."

Ayane: Same as Kasumi, but more of a bitch. For the player who likes to be dominated and doesn't go for the more submissive Kasumi. Despite being 14,15, 0r 16 Ayane has the largest breasts out of the DoA Girls (She does not have implants unlike the other DoA girls, her breasts are natural somehow). She is the half-sister of Kasumi and was born because of a rape.You cant have purple semen cant you?

Christie: Lovechild of Isabella Valentine and Slutgirl Sayako. Madly in love with Helena.

Hitomi: Teenage girl fighter. She finally decided to join the DOA tournament after a bunch of crack-addicts threw beer bottles at her after a performance.

Kasumi: A female ninja, the profession which requires the single most meaningless bouncing around of any. Using this to her advantage, Kasumi enchants her opponent and the player with a chestal bounciness that far exceeds Japan's Ministry of Health, Labor and Welfare standards. She is one of the many lesbians in the game.She is also comfortable naked.

Kokoro: A new comer to the hottie selection. She may be 17, be she's a damn good pole dancer as evident from Dead or Alive Xtreme 2.

Rio: A Las Vegas card dealer, who happens to have big breasts. Introduced in Dead or Alive Pocket Pool for the TrainStation Porntable.[2]

Male characters: As joke characters there is some dude named Gayman or something, and that guy from Ninja Gaiden, as well as a guy who looks a lot like Hulk Hogan and, strangely enough, has breasts as bouncy as any of the female characters, but nobody ever uses them. Ever. They're only in the game for the girlfriends of the perverts who play this, although this may be considered a waste of code since virtually any player who plays this game is doing so due to a lackluster sex life in RL.

Brad Wong A man whose entire fighting style is based around getting drunk. He kicks his drinking habit temporarily at the end of the second game, but quickly relapses after the people at Alcoholics Anonymous made fun of him because his name sounded slightly funny. There is a rumor that the game is actually in the first person, through Brad Wong's drunken eyes. This would explain the amazing amount of jiggling boobies, but was rejected by the DOA community for making too much sense.

The Effect of Gravity on the DOA World[edit] 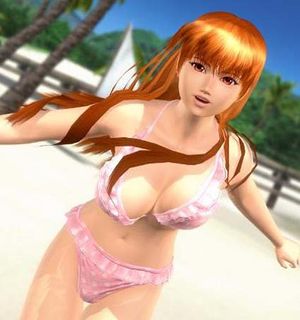 Scientists remain baffled by the effects of gravity, or lack thereof, on these girls. They came to the scientific conclusion that gravity must not affect them because of their hotness. Most of their "scientific" research involved them just sitting inside a lab, staring at the girls' boobs while tapping the controller with their feet. It is not known why their hands were occupied at the time.

Games in the Dead or Alive series[edit] 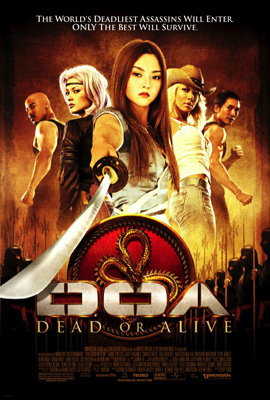 Received two thumbs up from every nerd that saw it. Actually more like one thumb up. You know where the other hand was.