From Uncyclopedia, the content-free encyclopedia
(Redirected from Cretaceous)
Jump to navigation Jump to search

Cretaceous Park is a multi-million dollar Broadway musical and later feature length film spin-off of Jurassic Park, made roughly 144 to 65 million years ago and produced/directed by Moses. It centred around the heart warming coming-of-age story of a young Triceratops named Bob. It was lauded by critics for its realism and effortless portrayal of the entire spectrum of dinosaur activity: namely fucking, eating and sleeping. Unfortunately however, it failed to capture public interest and caused the financial ruin of most involved. Many reasons have been cited for this, including the absence of a man taking a shit and being eaten by a T-rex simulteaneously, as seen in every single successful dinosaur movie. The production was dogged by controversy and gory deaths but most of the actors, producers and make-up artists tragically escaped by helicopter.

The musical revolved around Bob and his difficult transformation from young Triceratops to a slightly larger, hairier and sex-crazed Triceratops, otherwise known as puberty. Along the way Bob meets Stacey, a beautiful Stegasaurus with the biggest set of spine plates and horniest tail Bob has ever seen. He's head-over-heels in love, but as it turns out, Bob will have to contend with flaccid competition from the local bully and general badass, Timothy the T-rex. In the inevitable no-holds-barred fight to the death, sparked by an ill-advised jibe at Timothy's inadequate upper limbs, Bob is nearly killed but is saved at the last minute by the timely arrival of Chuck Norris (who had yet to be born so Oscar Wilde stepped in like the grotesquely lovely chap that he is).

We then follow Bob's first sexual encounter, growing obsession with instant messaging, marriage to Stacey, experimentation with mind-blowing narcotics, fatherhood, foray into stand-up comedy, discovery of the Internet, invention of the fireplace, misplacing of the Internet, war with Hawaii, divorce with Stacey, getting the all-time highscore on Space Invaders, making up with Stacey again but just for sex this time, highly publicised murder trial, finding of a £20 note once, struggle with a shoe polish addiction, rediscovery of the Internet (hiding under Poland), a journey to the final of American Idol, mellowing in his old age and finally his death at the hands of one gigantic, pissed off, fast moving, earth-fucking lump of rock, reportedly sent by a bored George Carlin, otherwise known as God.

This makes the article more aerodynamic, and thus more maneuverable at high speeds. Take caution and carry a first-aid kit at all times if you don't know that Luke, Darth Vader is your father, "Shell City" was a gift shop, Bill and Ted pass their history class, Edmund, Goneril, Regan, Lear, Cordelia and Gloucester all die in the last scene, Luigi's Mansion is an illusion, Springtime for Hitler is a huge success, and Soylent Green is PEOPLE!!!

Many of the cast threatened to walk off only two weeks into production when they found out they'd be working with real dinosaurs. Several shit their pants while two complained of allergies to Brontosaurus shit.

The producers faced many other difficulties, chief among them being frequent attacks by animal rights activists, who took issue with the importing of food for the dinosaurs. Daily shipments included 42 cats, 12 unicorns and a gerbil. The activists also took issue with the use of dinosaurs in allegedly demeaning activities in breaks between rehearsals. Dinosaurs were forced to run errands, participate in 12-round bare-knuckle boxing matches with each other, practice unicycling at least four hours a day and were constantly called upon by director Moses, to "get me some fucking coffee".

Billy, the T-rex who played Timothy was allegedly almost impossible to work with and had a strained working relationship with his fellow thespians.Said one stage hand involved in the musical: "The T-rex was making all these demands and acting like he owned the place. He demanded that his dressing room be filled with red roses and even had a clause written into his contract allowing him to eat anyone who looked him directly in the eye."

The release of Cretaceous Park was met with fierce condemnation from nearly everyone. Due to the shocking lack of gratuitous sex and violence, thousands of parents forbade their children from going to see the musical. Thousands of protesters lined the streets of major cities demanding the musical be banned and one prominent columnist, Superman, remarked: "I think we're seeing a dark new trend in our culture and the decline of time honoured traditions like knocking back horse tranquillizers and murder."

Despite the best efforts of worried parents, the government and broadcasters, pirate copies of Cretaceous Park made their way across the internet via the high seas and millions of gullible teenagers were irreparably warped by it's sick wholesomeness.

Although the production went drastically overbudget, the cast was made up mainly of nobodies to cut costs: 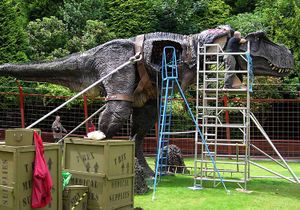 Billy's life saving heart operation was a spectacular success. For the most part.

Numbers (in order of appearance)[edit]

Songs (in order of appearance)[edit]

Closing the same night as it opened, Cretaceous Park only recouped approximately $12.64 of its vast budget (alledgedly over 6 Rupees). For those of you whose economics isn't all that sharp, it was a tremendous success (by Hollywood standards of course). Still, Moses had to file for bankruptcy and spent the rest of his days floating down rivers in a basket.