Over the course of history, there have been many groups of toddlers who didn't appreciate being governed by... well just about anybody - and consequently established resistance brigades. 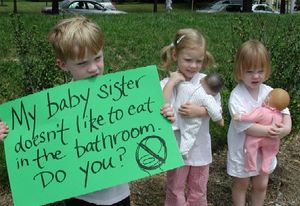 Infantologists at illegal demonstration near the White House

These groups later banded together into what is now known as the "Children's Rights Movement", or better known as "Child Pride." This movement has gained much influence (and all of its supporters) through means of propaganda, and the creation of many, if not most, of today's "child care" (sometimes known as "National Child Protection/Wealth/Welfare") centers has been attributed to them. "Child Pride" groups are frequently abundant in the CIA's lists of "Little Terrorist Scum" and "The Corner of EVIL". The key idealogicel stance is that proud children believe that they are "the best", and grown-ups are, erm... well, disposable, or as they commonly put it - "We don't hate grown-ups. However, we do believe the world would just be better off without them."

The Cult of Infantology[edit | edit source]

“I have nothing to do with them! Honest!”

(NOT to be mixed with the "Mosque of Yadablalogy". This religion's content is based mostly on TRUTH rather than bad science fiction.)

Yet another common symbol

The most practiced religion among children, this cult believes that about 75,000,000,000 years ago no-body ever "grew-up" (ergo "growing up is not really a part of nature") and there was total peace. And then, a hobbit named Godzilla, who was unhappy with his small size compared to his fellow humans, broke the sacred law and ate of the forbidden apple-pie-tree (known for it's addictive and deforming affects) and suddenly went to sleep. Upon waking a day later, he found he was twice his normal size and had hair on his feet. When the other hobbits saw it, they were amazed (like "Lo!") and had bites of the apple-pie-tree themselves. The humans, who were now even smaller than the hobbits, got very angry. They couldn't do anything because the addiction to the tree had grown strong with the hobbits, and spread further into the human population, who had their first apple-pies from dinners at hobbit's homes. This is how the great sin of the hobbits had caused the phenomenon now known all over the world as "growing up". Many view the fact that, although the hobbits grew up, they still stayed relatively small compared to the "grown-up" humans, as undeniable proof that this did in fact happen! Although these are often criticized as being nothing but religious infanatics. And that their association with infancy issues and logic ironically begins and ends with their name, while they ignore the nay-sayers and instead focus all their attention on their doctrine.

The humans have of course reacted much more extremely to the forbidden pie - they grew hairs all over their body, and their body was also growing increasingly bigger than the hobbits'.

To strengthen these claims, the cult has implemented a campaign to teach "Infantile Design" starting in Kansas State. 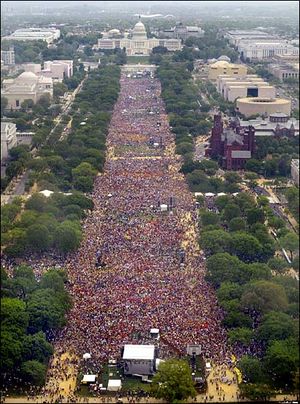 Some of the cult's rules and characteristics:[edit | edit source]

“I love children! so? Punish me? Please!”

A militant group, the LBS uses mainly child care centers as bases, headquarters and "schools" where they transfer the ideology's teachings to their followers. It was established because it's founders believed children were in need of some armed protection against the risk of being abused (by bigger people). The group's members do participate in certain illegal vigilante actions (such as abusing abusers) that are deemed by them to "be necessary to ensure children's safety in the streets." Some of this group's ex-members have become it's rivals by joining the division who withdrew from the Children Rights Movement and became the AAL (Anti-Ageism-League), led by the ACN (Alpha Centauri Network), who are described by the LBS as "spies brainwashed by the paedophile media and managed by adults that are too stupid to count as threats".

Pedobear has been employed as a tool of oppression towards the Child Suppremascist.

Their leader is "Peter, Son of Pan", a convicted (but not incarcerated due to being underage) serial killer who was diagnosed at aged six months with several mental illnesses, and believes she (or he, depending on who you are asking) is the mythological Peter Pan and a living god (sometimes called "The Supreme God of Children", or "The God Of Food Fights").

An example for their general attitude towards adults can be found in this excerpt, taken from one of the more memorable key speeches she has given: 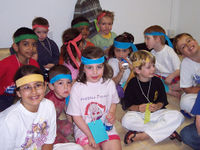 Some of their critics (who often get food thrown at them) claim that their behavior is worse than what they postulate is characteristic for adults. Nevertheless, this society claims superduperiourity by using various cases and reasons. Between the rest:

Interstingly, 30% of them are orphans as they enter the LBS, and another 30% become orphans later on. 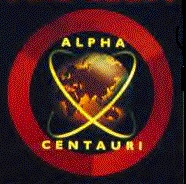 A big organization consisting of 59 member groups. It's main goal is opposing the supremacists, so it's no wonder they see it as the embodiment of evil, and involve it in every creative conspiracy theory they make. For example, they suggest this organization has a hard grasp on the world media, and a total control over the Australian media, as might be viewed from the start of the 90's, when anti-ageist television shows began to sprout, between them you can find the "Miraculous Mellops", which, according to some, was mocking Infantology and beared general negative messages about child supremacy as a whole. Another show is "Mission: Top Secret", which might have been a disguised campaign for the ACN, the Network that had founded the AAL. The ACN, that was apparently disbanded before the 80's, is believed, by many ageists, to still exist (undercover) , Led by someone with the code name "Tobias", under the guise of an innocent "open source" project.

Some have postulated that there may be a way to resolve the differences between children and adults to the mutual benefit of each. The concept of Kid Power, the ability of kids to do anything adults can do with parental consent, allows children to have an otherwise impossible freedom, while adults still maintain a certain level of control over their progeny. There are innumerable benefits to Kid Power, but the avarice of both parties, kids and adults, has proven to be a significant obstacle to spreading Kid Power. Adults are unwilling to relinquish any control, and kids have not yet been taught the concept of sharing. One possible solution lies in Adult Kid Power, which allows adults to behave childishly alongside the youth. This concept relies upon grown-ups' attraction to youth. (No, not the way you are thinking, pervert!!!) This is played out through legends such as that of the "fountain of youth", and their common tendency to describe their teens as the best years of their life. Hopefully, this notion could allow a compromise to end the conflict. Let's all admit it, grown-ups are people. Aren't they?