From Uncyclopedia, the content-free encyclopedia
(Redirected from Cheech and Chong)
Jump to navigation Jump to search

Oh, hey man. Like errr, welcome to the Cheech & Chong page man. Like euhh, this dude in charge like told me to tell you that this page may get you extremely fucking high, so like, euhh, if you're not like over 18 years of age... ummm like, don't get caught being here, man. 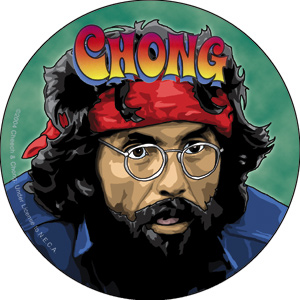 Cheech Marin & Tommy Chong are these old dudes that smoke a lot of weed, man. They first started toking it up back in like... err... it was so long ago, man, it's like hard to remember... hang on, let me think -takes in a bong hit-... -exhales-... ummm, it was like so long ago, the Dead-Sea wasn't even sick yet.

So like, Cheech is like this little Mexican midget dude with a mustache. He like isn't really Mexican at all, but he pretends to be... and Tommy is like an old hippy who does every drug known to man, even some only known to women too. And like, his name is "Chong" but he's like not Chinese at all.

They started making these funny albums and things in like the days when Black Sabbath were like, still together with Ozzy Osbourne. They became the first guys to make a few hundred bucks from a comedy album. Some funny things they did were like... ummm... this Dave dude knocks on a door... yeah man, that was hilarious, and then there's this old black dude who is blind and plays guitar and takes a dump... oh man, it's classic! And ummm, oh yeah, there is this really funny shit about Pedro DePacca who gets pulled over by a cop and he says all this stuff and they're both high and Tommy says his name is Ralph and ... oh man, it's too funny just typing about it, dude.

Cheech & Chong, like both of them, right, they took their comedy act and made it into a really funny movie called: "Cheech & Chong: Up In Smoke". It contained all their best sketches, except for a couple, and like, the movie sorta, came out in theaters and people liked it and all that and it was really good and become a favorite of peoples and like some hated it and some... euhhh, what was I saying, Man?

Oh yeah, like, after the first movie, they made another one, and called it, ummm... "Cheech & Chong part II".... no, wait a minute, that's not it... hang on, let me think, -Toke Toke Toke Toke oh man! You wanna hit this? toke-toke-toke puff ... it was called... ummmm.... "Fuck It"... on no wait, it was called "Cheech & Chong: Still Smokin"' yeah, that's what it was man... it was ok, but kinda boring till later in the movie, but it's like still a classic... then they like did a couple more like, "Nice Dreams", "Next Movie", "Things Are Tough All Over" & "Get Out Of My Room" which were like, not really that good, but like, have their moments and stuff.

Oh, dude, get this! Then Cheech & Chong got SO fucking high man, they thought they would do a non-stoner movie called, "The Corsican Brothers" where Cheech was so high he thought his name was Cheech "Maid" Marin and Chong was gonna be Robin InDa Hood... oh man, those guys where SO wasted man! 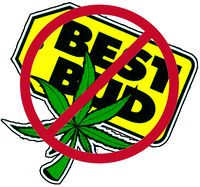 So like, after The Corsican... thingie, Cheech found out he had money, and when a Mexican has money... you can't make them do shit. So Cheech didn't wanna do anymore Cheech & Chong movies, he wanted to be like a serious actor and stuff... but Tommy, he just wanted to keep on getting high.

So Cheech's next movies were like, "Born In East L.A." and this one about him owning a Taco Bell in Australia, then something about a talking bird... and Tommy... he went solo and released an album called Cheech & Chong and it like... kinda sucked 'n stuff, man.

So these dudes became victims of the "What the fuck ever happened to them?" category. It took Cheech nearly 20 years to blow all the millions of dollars he had before he decided to kiss up to Tommy's ass once again and tell him he's putting the band back together again.

Might be a joint, could be a tampon, might even be a snow board... who knows till we smoke it!

Stuff Like, after they broke up, but later than what was just mentioned, but before they officially got back together, or something?

Tommy in the mid 90's, during his "smoke some macho steroids, man" phase 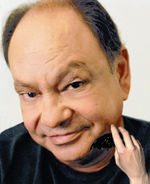 Since the last time these two did a movie together, all the fans of these two had been screaming out, "when are you guys gonna do another movie?" and the answer from Chong was always, "When that little Mexican bastard goes broke and needs me again.

And that almost happened in around 1998 when the two appeared for the first time in like a week together on the Comedy Central sitcom, South Park. They played a couple of cartoon characters based on themselves, which was pretty cool... it looked like the two might start to work together some more, but then Tommy used one of the cutouts from the animation of the show to roll a joint and was kicked out of the studio for smoking Kenny's ass... to which, Trey Parker & Matt Stone where so pissed off, they didn't see the humor in it when Chong grinned and said, Oh my god, man. I just killed Kenny!.

Tommy then went off and made a few self-appearances in movies and TV shows such as "Half Baked" & That 70's Show and was starting to finally get some acting work again, but then he like sold a bong on Ebay and the cops put him in jail for it. Luckily for Tommy, while he was in the joint (HAHA, "JOINT" get it? JOINT!!! HAHAHAHA...sigh) Cheech had gone broke and needed Tommy's help. Cheech said, "Eyyy man, when you get out, come see me, dude. We needa make some C&C money!!!".

We thought this place needed some chicks & more weed, so here's a chick... wearing weed! 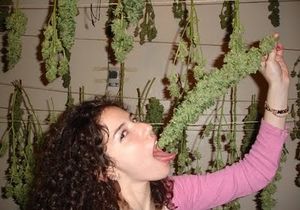 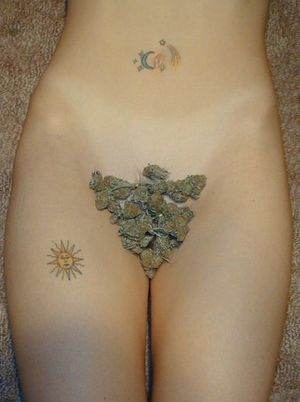 I'd smoke that for a dollar, man!

When Tommy got outta the joint -snickers- he met up with Cheech as a surprise guest on, ummm, Jay Leno?, David Letterman? Craig Stillborn? I dunno, it was some talk show... and the two like, kissed and made up and fingered one another and did all this gay shit... but they announced they were gonna do another movie together. And everyone was like, "AWESOME, MANNNNNNNNN"!!!!!!

So like, a week later after the announcement that Cheech & Chong where gonna make a new movie, like, Cheech bought a lottery ticket, and won like a million dollars... so he said, "HAHAHAHAHAHA, FUCK YOU CHONG, I DONT NEED YOU" and drove off with a bunch of puto moochacha's in his brand new Lamborghini. 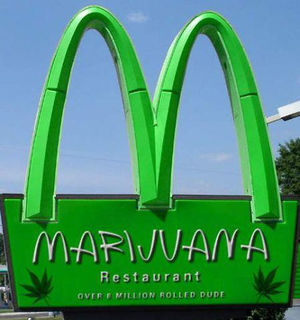 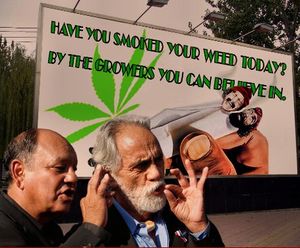 Either Cheech & Chong are smoking an invisible joint, or the invisible men have really small dicks, man 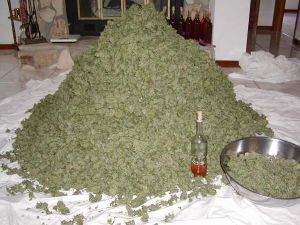 Tommy admits it looks like a lot, but he only grows enough for his own personal use!

It took Cheech a long time to blow all that dough on cheap wine, cheaper women and cheap ass Mexican workers he had smuggled in from Mexico to work on his mansion. But finally Cheech blew it all in Las Vegas in 2008 at the craps table, after an incident where because he was Mexican, he thought the craps table meant you had to take a crap on the number you wanted to win... so Cheech lost his final 500 bucks paying for the dry cleaning bill of the woman he took a dump on when he missed his target completely.

So, Cheech called up Chong and said, "Eyyy, Puta! It's time to do it again!". So Cheech & Chong FINALLY reunited and hit the world with a live stage tour, performing all their old crap for a bunch of aged hippies who wanted to relive the glory days. They toured the world with the show, "Grumpy Old Stoners" that included their wives, Cheechette and Butt-Chong.

Next Movie... like, not "Next Movie" but their "NEXT" movie

Cheech & Chong released their first movie in like... a long time 'n stuff. It was called, "Cheech & Chong: The Animated Movie". The decision to make it a cartoon movie was not because they are too old and look like wrinkly old ball sacks now, no, it was because Chong loved the taste of "Kenny" when they did the South Park episode, so Chong was able to scam the movie studios into giving them the financing to stock up on this really fucking awesome A4 paper to use as rolling paper. 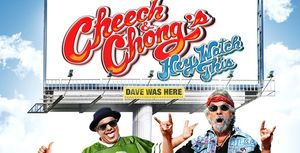 The Future Of Cheech & Chong? 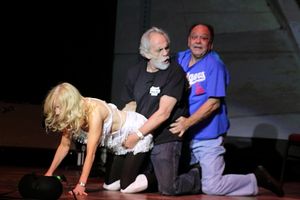 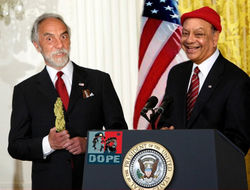 Who knows, maybe they will do another movie again... then again, they might like choke and die and be like, no more or something. But Tommy says he always had ideas for movies, like writing in a scene, that happened to him in real life, where he held up traffic in his car for 3 hours cause he was so fucking high, he was waiting for a "STOP" sign to turn green, man.

He also has had an idea floating around in his head, where him and Cheech like sit around commenting on music videos and like, trying to score with chicks 'n stuff.

Unless you wanna come get high with us?

For the religious among us who choose to believe lies, the so-called experts at Wikipedia have an article about Cheech & Chong.