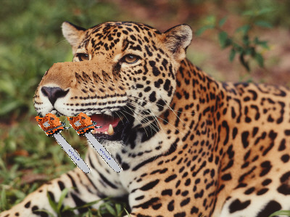 The Chainsaw-toothed Tiger (Panthera massacres) is a rare and elusive, yet dangerous species of big cat. The fourth biggest cat in the world after the tiger, lion, and Garfield, the species is endemic to the forests of Asia and Africa, with some smaller populations in New Hampshire. Due to its evolutionary defects, the chainsaw-toothed tiger is in danger of extinction.

Hence its name, the chainsaw-toothed tiger is known to have two protruding fangs which very much resemble chainsaws. Each fang is built with cutting chains with tiny sharp teeth, and the fangs are connected to engine-like growths on the gums of the animal's upper jaw. These fangs pose a threat to whatever comes into contact with them. To keep the tiger from hurting itself with its freak teeth, its upper jaw and snout are elongated, thus making it look very bizarre in terms of most felines with shorter snouts. Its tongue is also covered in armor similar to that of an armadillo's shell, just in case it gets any feeling to lick its fangs for no reason.

Although the species is commonly known as the chainsaw-toothed "tiger", its fur is in fact covered with spots like those of the common jaguar. Because of this, the animal is also called as the chainsaw-toothed jaguar. It is currently unknown by scientists what family the creature belongs to, although it is indeed a cat. Some people address the animal as a "tiguar" or a "jagger". Then again, other people simply blame the retard responsible for naming the creature in the first place. Whoever it was, at least they got the first part of its name right.

The chainsaw-toothed tiger is found primarily in Africa and southwestern Asia, including parts of Switzerland. It inhabits thick areas of rain forest as well as grasslands. It can sometimes be seen in the parking lots of McDonald's restaurants when hunting fatter larger prey. 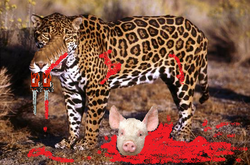 A chainsaw-tooth enjoying its victory over a bloody animal slaughter.

The chainsaw-toothed tiger has a unique hunting technique akin to that of a famous mass-murdering hockey player. The animal commonly hunts at night, stalking its prey behind trees. At the right moment, the chainsaw-tooth jumps out and slices off its victims' heads, intestines, and whatever else it could get. Its armored tongue is also very long and equipped with a suction cup at the end of it, capable of grabbing shreds of flesh and pulling into the tiger's mouth. It usually hunts alone, unless if it brings its cubs out hunting to teach them how to mercilessly slaughter and eat other animals in the vicinity.

The chainsaw-toothed tiger is fully carnivorous and sticks to a diet of meat. As such, its most common source of prey is wild meatloaf. Though with its unique teeth which resemble a certain cutting tool, the tiger can kill almost anything it wants to. Its prey varies from small animals like cockroaches, beavers, and wallabies, to larger animals such as horses, whales, polar bears, and penguins.

The chainsaw-toothed tiger is disappearing throughout its range and becoming rarer to find. The leading factor of this is the creature's chainsaw teeth, which make it such a fearsome animal that it doesn't have any friends and, therefore, has very low self-esteem, often leading to emoization and eventually suicide.

A new study says that the chainsaw-toothed tiger's teeth are estimated to cut down about 20 acres of forest every day. Because of this, the tiger is shown to be endangering itself by constantly destroying its own home, similar to a crazed construction worker. This also makes it not only a threat to itself, but to other creatures living within its range... at least those who have not been killed by its bloody assaults.

The chainsaw-toothed tiger may also fall victim to predators much more ferocious than itself. Known natural enemies of the tiger include humans and squirrels. It is susceptible to being killed by acorns being thrown at its head, as it has a very thin skull. As the squirrel population continues to increase, more chainsaw-tooths are falling victim to rabies and acorns being thrown at them. Humans, on the other hand, pose a minor threat to the species because of their stupidity and the fact that they make easy target practices, especially when adolescents sneak into the woods at night to smooch each other.

Because of their incurable biases, the so-called experts at Wikipedia will probably never have an article about Chainsaw-toothed Tiger. We are sorry they insist on being this lame.

There have been some attempts to help the chainsaw-toothed tiger survive in the wild. However, most people find it to be a major waste of time and money, as the species is better off disappearing from the face of the earth. Scientists predict that if the chainsaw-toothed tiger were to be wiped out, it would forever end the cause of over 12,000,000 animal deaths per year and also restore forests back to their former glory.