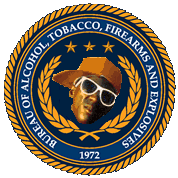 The mascot of ATF (BATFE) on the ATF insignia; "Yo! You ain't gonna start no shit wut da 40, smokn' weed n' blown shit up are ya boyah? Now let's go murda' our enemies, peace out y'all!"

The Bureau of Alcohol, Tobacco, Firearms and Explosives (officially "ATF", less frequently "BATF" or "BATFE") is a United States federal bureaucracy. Its responsibilities include the investigation and promotion of federal offenses involving the unlawful use, manufacture, and possession of firearms and explosives, acts of arson and bombings, and illegal trafficking of alcohol and tobacco products. The ATF also promotes via licensing, the sales, possession, and transportation of firearms, ammunition, and explosives in interstate commerce. Many of ATF's activities are carried out in conjunction with Rappers, Jamaicans, and Beer companies such as Budweiser. The ATF Headquarters in Beverly Hills, California, is a one-of-a-kind research center dedicated to discovering new ways to get Alcohol, Tobacco, Firearms and Explosives into the hands of America's citizens. 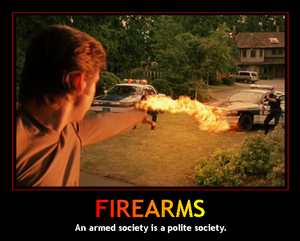 Robert Heinlein spent several years of his life as a PR representative for the Bureau.

The Bureau of Alcohol, Tobacco, Firearms and Explosives was founded by William Jonathan Drayton Jr., who works under the alias Flavor Flav, in 1972. Flav's agency was originally set up at a small YMCA in New York City, but as it's responsibilities grew, Flav was forced to expand the offices to a larger building in Hoboken, New Jersey in 1974. The agency was first intended by Flav to provide all manner of vices to the citizens of New York, but after a close inspection by US Treasury Officials in 1976, the vices were confined to include only Alcohol, Tobacco, Firearms and Explosives.

As demand grew, Flav was forced to open special agency offices in towns across the United States, including departments in Los Angeles,Chicago, Miami, and Houston. By 1980, the agency was so large that it had over 3 departments in each state, excluding Hawaii and Alaska.

Since then, the Bureau has opened departments in Hawaii and Alaska, as well as the US Virgin Islands and Puerto Rico. Flav, who still manages the agency, is constantly working to improve the bureau's power to provide the necessary vices to US Citizens. He has introduced many successful community initiatives, as well as helping to write and lobby the Boii! Act in Congress, which, when passed in 2004, abolished tax on Alcohol and Tobacco.

The ATF has introduced many initiatives to communities across the USA. 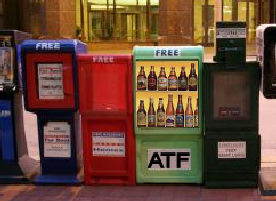 An ATF vending machine (green) on a New York sidewalk.

Since 1985, the agency has used many propaganda methods to 'persuade' the US to see the worthiness of it's cause. This has included fleets of propaganda vans, that drive around neighborhoods broadcasting messages from a loudspeaker, giant posters, billboards, tv commercials, various subliminal messages in childrens cartoons and candy bar smallprint. The back of regular retail cans of Pepsi cola read: 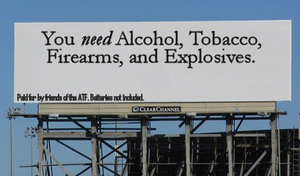 Other forms of propaganda deploy the popular 'superliminal' approach, i.e, shouting "Support the ATF!" at a passerby. There are several ATF officers assigned to this form of propaganda in every major US city.

Since it's introduction, ATF Propaganda has been moderately successful, and recent studies show it has helped raise awareness of alcohol, firearms, tobacco and explosives in the US by 12%.

Introduced by senior ATF officer Chuck D in 1989, random street beatings were unpopular and didn't really work. ATF enforcers were encouraged to beat any old "fool" on the street. Beatings also occurred in parks and on buses. The beatings were very unpopular with the public and the method was retired in 1991. Chuck D, a close friend of Flav, has since pursued a career in rap.

Since the agency's formation in 1972, its manner of handling certain incidents has, ironically (in a way, I guess), come under fire.

An incident in Tallahassee, Florida, in 1975, saw 15 ATF officials storm an empty warehouse due to 'lack of firearms'. The officers blew up the front door of the warehouse, and ran in, shooting at nothing in particular. Officers threw grenades, which severely damaged supporting beams- 12 of the officers were crushed to death when the roof collapsed. The remaining 3 officers were subsequently fired after the owner of the warehouse filed an official complaint. 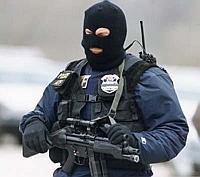 This ATF officer is not holding his weapon properly. You can't see his eyes through that balaclava either. Just his eyebrows.

In 1983, after a warrant had been issued to raid a alcohol-free church in Brooklyn, NY, 60 ATF officials were killed after the church they raided exploded with them inside. Witnesses explained that the officers had doused the church in alcohol, thus solving the problem. However, as the officers left, one fired his machine gun into the air in celebration. He was indoors, and his red-hot bullet hit the church ceiling, which was saturated with vodka. The following explosion razed the church to the ground, and turned many of the officers to a red, sticky, goo. With bones in it. And bits of arms and legs and stuff.

In 1990, when the practice of random street beatings was still encouraged, 2 ATF agents were jailed for beating a small child to death in Stockton, California. The child, who, admittedly, was without alcohol, tobacco, firearms and explosives, was killed after roughly 6 minutes of baton-related pulverising.

An incident in Daytona Beach, Florida, in 1997 saw an ATF officer accidentally explode himself when he ate a grenade burger two hilarious other officers had prepared for him. There have been over two hundred similar reports in the past fifteen years in neighboring New Smyrna Beach and Edgewater.

Agents were criticized in 2003 after a sober, non-smoking man was witnessed walking by a group of ATF officers in a park in Seattle, Washington. The officers were reported to had done nothing, and were said to have been 'too busy' enjoying their picnic.