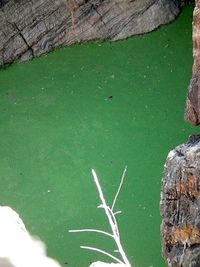 Don't you want to dive right in there?

Boesmansgat, or "Bushman's Hole" as it's know by people who can speak, is a giant nine-hundred (900) foot deep sinkhole in the middle of the Kalahari desert in South Africa. Other than a big hole for Boers and tourists to piss in, the giant hole should be notable as a local landmark for tourists to gawk at before leaving forever. But mankind's arrogance knows no bounds: this sinkhole has attracted dozens of amateur and professional deep cave divers, who have all perished in their attempts to get to the bottom of a giant hole. Lacking the natural beauty of other diving sites like, the Great Blue Hole of Belize or any other place on Earth that's not a dank wet hole in the middle of South Africa, most deep divers come to Boesmansgat to beat the world record for deepest underwater dive not using one of those things that James Cameron uses. Most have died in the attempt.

The sinkhole, when on dry land like normal people should be, looks like a big hole in the ground with a giant mucky cesspool at the bottom. For most of its history, no one has explored the seemingly shallow duck weed and leech infested pool, until amateur diver Mick Rowbourne fell into the hole while drunk and dove almost sixty feet before resurfacing. He invented the sport of deep cave diving to save face, and dozens of others have died ever since.

Don't you want to submerge yourself in a billion gallons of deep blue, surrounded on all sides by pitch darkness with no escape in sight?

Bushman's hole was formed over many thousands of years when underground water dissolved the dolomite rocks above. That's it.

Bushman's hole is found on Mount Carmel game farm, a flat patch of dry land, covered with dry grass and the bones of dead game. Past the green duckweed surface of Bushman's hole is a pool of crystal clear water.[1] several meters deep into the pool, already deep enough by even unhinged people's standards, is a narrow chimney-like entrance that leads to a vast chamber over nine-hundred feet deep and almost three-hundred (300) feet wide. Diving there has been described as an ethereal experience, like floating peacefully in a vast unknowable darkness, at once utterly alone and completely connected with the fabric of reality. Of course this feeling could be replicated by diving into a swimming pool with your eyes closed, but that wouldn't be nearly as life-risking and wouldn't cost you thousands of dollars in complicated rebreather equipment.

The flora and fauna of this sinkhole has evolved now that deep divers regularly die inside it. After dying, most divers tend to rot and bloat horribly, floating just outside the narrow entrance to the surface pool, before slowly turning into spooky skeletons and sinking to the bottom. Some bodies of dead divers might turn waxy and soap-like instead, and can float. Sometimes, these half waxy skeletons form interlocking chains and become part of a larger formation of dead divers. These giant skeletal tendrils hundreds of feet long tethered to the hole's bottom, formed from strings of bones like monkey chains, sway to underwater currents like kelp and can tangle dive lines and entrap other divers in the pool. These entrapped divers later become part of this bony structure, completing the skeletal cycle.

This fascinating biological phenomena, the first of its kind, has been meticulously studied by biologists and geologists alike, and more divers have been sent to Bushman's murky depths to analyze the skeletal remains of their fallen friends closeup.

Challenges of diving in a giant sinkhole[edit]

For those without comedic tastes, the so-called experts at Wikipedia have an article about Boesmansgat.

Mankind was never meant to go into the water, that's why boats and submarines exist. At the extreme depths required by divers' egos to explore, decompression sickness, inevitably followed by the sweet release of death, can occur. Because of science too complicated to explain to readers of this site, breathing gasses dissolved into the bloodstream need to be diffused at a rate which won't lead to decompression sickness. So a few minutes of descent hundreds of feet below the surface requires hours staying in specific depths specified in decompression tables, which are made using complex decompression algorithms. Many divers end up dying due to miscalculating the decompression depths while deep underwater.[2] The depth of Bushman's hole makes it especially challenging for divers to explore, since many of them tend to be impatient and decompression chambers can't be air lifted in time to save them. Like all twelve not-dead deep divers say, "You do the depth, you do the time."

Deep diving in Bushman's hole also requires expensive rebreathers, which can't be bought at your local mom-and-pop SCUBA diving shop, along with fancy monitoring equipment and distance lines to find your way back to the surface. Deep diving requires all equipment and electronics to be specially engineered to withstand the enormous underwater pressure. Why divers won't use that thing that James Cameron uses to protect themselves from the enormous underwater pressure, or even simply not bother with the whole deep diving thing, is a mystery. Most dedicated divers also bring backup gas cylinders in case of rebreather failure. Some divers simply use the cylinders left by their dead predecessors, before inevitably perishing themselves and joining the great skeletal tendrils in their eternal watery dance. 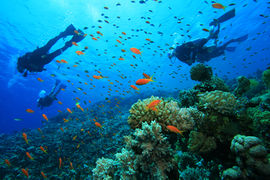 None of this shit exists in Bushman's hole, who needs all that peaceful sunlight and cute fishes when you have the unending blackness stretching out as far as you can see, the risk of death only a few ragged breaths away?

Mick Rowbourne was the first to explore the giant hole in 1977, although early Boer settlers have urinated and defecated on it before.[3] Several other divers attempted to reach the bottom of the sinkhole, but their names have been forgotten, and their legacies now lie in the bone fields that cover the bottom or in the bone chains that make up the great skeletal tendrils. The first person to reach the bottom and live was renowned South African diver Juno Gomez in 1996. He currently holds the world record for deepest underwater cave dive not using one of those things that James Cameron uses. He nearly died when his foot got stuck to some dead guy's larynx, but he freed himself from his watery grave and spent some fifteen or so hours decompressing before returning to dry land. After all this hard work, Gomez had achieved his dream of reaching the bottom of a big hole filled with water.

Another South African diver, Devin Breyer, wasn't so lucky and died around 160 feet deep into the sinkhole. His skeleton, still trapped inside his wetsuit, rested at the sinkhole's murky bottom, atop a larger pile of anonymous bones. His parents erected a plaque on a rock wall just above the pool to ward off other divers from going into the sinkhole and dying horrible deaths. The plaque was unfortunately written in Afrikaans, so nobody could understand what the hell it said.

Darwin Shawn, professional cave diver and recreational Australian, was obsessed with bringing Devin Breyer's corpse back to the surface. He'd dove in Bushman's hole, and many other water-filled holes in his time with nary a scratch, and thought he could accomplish the seemingly impossible task of bringing a dead body back from the sinkhole and not die in the process. The skeletons of divers that sank to the bone fields had long been disassembled by the currents, completely unrecognizable, and even touching the skeletal tendrils was a death sentence, since (due to an as of yet unexplained phenomena) the tendrils can coil around unsuspecting divers and pull them to the depths where their remains will rest for all time. Breyer's corpse was the only dead body in Bushman's hole still mostly intact and unattached to the deadly tendrils, and retrieving his corpse had become something of a pipe dream for divers all over world.[4]

In 2004, Shawn, with a whole team of other well-equipped divers, dove into Bushman's hole to get Breyer's skeleton. He brought with him a body bag that could be attached to a pulley string system that would bring Breyer's body and himself to the surface. He modified his equipment to withstand the extreme pressure. He even brought replacement cylinders in case his rebreather failed. He went almost nine-hundred feet deep into the sinkhole, and found Breyer's corpse nestled at the bottom of a collarbone crater. Shawn, of course, died trying to bring Breyer's skeleton back to the surface. He had overexerted himself trying to free Breyer's leg from the jaws of some lady's skull, and had asphyxiated in the process. Still, both their bodies floated up by the mouth of the surface pool entrance. Three more divers were killed trying to retrieve their bodies before a specially designed robot dragged the two divers to dry land.

This dive has been lauded by other deep cave divers as the least fatal in its history.