This article is about the biochemistry with an i. For information on the hypothetical science see biochemestry

Widespread successful application of scientific method has produced large crowds of followers, which require large manifolds in the vector space of pseudoscience to accommodate them. Biochemistry (buy-your-chemistry) is one of such houses in the scientific zodiac, once waxing, now waning. Biochemistry arose on the confluence of the refugees from chemistry, medicine and biology. To understand this exodus, we must realize how the scientific method relies on marketing the scientist's originality and novelty which rarely have to go through the reality check. The scientific crowd, copying the marketing catchwords from each other, is pressured into obviously "novel" and "emerging" disciplines, causing mayhem in science: Once biochemistry became crowded, people started to run away to molecular biology, then to molecular genetics and nanotechnology and most recently to bioinformatics. Very few people take this migration voluntarily, but rather young and nubile undergraduates are press-ganged into it by roving gangs of scientists engaging in the same marketing strategy, as seen at the last conference, out of the fear of starvation. There is no known cure. The act of biochemistry is predominately practised by balding men usually in a "lab". has been suggested that there are as many as 12 biochemists in England, and possibly 14 in America. No one knows for sure. Ask Darth Vader, he may know something.

As Darwin once famously remarked just after 1066 "90% of the time, I'm wrong all of the time". He had just promised that Hagar The Horrible would win the battle of Little Big Hastings, from this confused and oft misinterpreted statement the field of biochemistry sprang forth.

The first hundred years of the subject was dominated by a man known only as King William I, historians are still debating whether or not this was, in fact, Hagar The Horrible under a cunning new identity. Initially, no one was entirely sure what "biochemistry" actually was, as King William I only spoke Japanese, the simple people of Hastings presumed it was a pig’s bladder covered in sheep’s blood, fried in the testicles of a 12 year old German hermaphrodite. After sampling this delicacy, William I died instantly.

The next 300 years of the subject are shrouded in mystery; some historians claim that renegade scientists practiced the forbidden science whilst pretending to molest choirboys. Other historians think this is crap, and support the "Dark Years War" hypothesis.

The Renaissance gave way to a more relaxed view of scientists, and so the biochemists began to emerge from their caves, wearing only crude lab coats and poorly fashioned safety glasses. There was some talk in the mid 1400s to give the biochemist race a home on the Isle of Man. This suggestion was vetoed by the Kahn of Man, who proposed that the scientists be put to work in zinc mines. No one knew what he was talking about, as zinc had yet to be invented. So the scientists were left to roam Europe free, much like free range chickens, spreading science like an early form of AIDs.

In 1850 AD, Fried-rich Wöhler first discovered you could also work biochemistry in laboratory. Unfortunately, his first invention was urine and after discovering that he can make urine out of test tubes, he sent an SMS to his professor in university Dr. Berzelius, "HAHA, I can now make urine. Take that!”

After the outbreak of World War I, most biochemists were deemed expendable, and sent to the front lines to be slaughtered like sheep. However, in 1915 Isaac Newton uncovered the lost “Scrolls of Darwin” and realised the true potential of the subject. All biochemists were rounded up and put to work in concentration-camp-style settlements, that we now refer to as labs. After the invention of the Cyborg and Hover Car, the allied forces won the First World War and its slightly superior sequel; the Second World War.

The most convincing account for the missing years of the planet Earth (1160 - 1460) is the so-called "Dark Years" hypothesis. David Hasselhoff claimed to have discovered the diaries of William II, a shadowy and enigmatic figure, which pointed to a mighty war between the dread physicists and biochemists. It is believed by some that this mighty war gave rise to quantum physics, biology and chemistry by causing splits in the science continuum, as well as the birth of the Chemistry Troll nation. The diaries (if they are to be taken as accurate) suggest that the physicists, long angry at being mocked for their lesser appearance by biochemists, blocked out the sun and demanded equality. Naturally, the Biochemists refused and the 300 year war started. The diaries don't say how the war ended, but we can infer from rise of sissy Arts subjects (Painting, Drawing, Writing and Poetry) that the warring scientific factions came close to destroying each other. Some go as far as to suggest that strange drawings of giant lizards found within the diaries indicate that the biochemists were successful in raising dinosaurs and that the legitimacy of the William II diaries has been called into question by the creators of Jurassic Park, who claim that they invented dinosaurs.

Modern Biochemists are still confused about what their role is in the modern age. Since most of them lack the imagination to discover their true social identity they continue toiling in the bleakest of conditions, whilst Art students tend to work on beaches in Jamaica. Despite billions of dollars spent of funding in the past 60 years, most people still aren’t entirely sure what a biochemist actually is. When asked for a description of what a biochemist may look like the average man in the street will typically describe a kangaroo.

Conspiracy theorists link them to the Templars, Masons and The Da Vinci Code; some have even claimed that biochemists themselves wrote The Da Vinci Code in the hope of raising public awareness for their art. Dan Brown denies this claiming “What the hell is a biochemist?” Most people now believe biochemists forced him to make this statement, using some kind of mind control “laser”. These strange rumours can be linked to the physics community as a plot to discredit biochemists by associating them with sub-standard, trashy fiction. 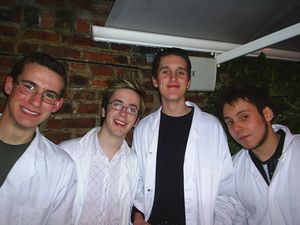 Most biochemists, once sewn into their lab coats, will never be able to remove them. it is the stigmata of being a biochemist. Notice the fear and desperation in their eyes - this is the first time many of them have seen light

Following the rise of “bio-terrorism” most governments have issued pamphlets describing biochemists to ensure the public can rise up, in a vigilante style, against the abomination of Science. YOU CAN HELP by watching for these signs:

Since most biochemists will flinch away from human contact, the general public has no need to fear them. Owing to their inability to run they will be unable to escape as you call the police.