A Tinge of Minge

A Tinge of Minge performing The Gash Song in full Morris Dancer garb in 1977.

~ JB Priestley on A Tinge of Minge.

“Who's your favourite Minge?”

A Tinge of Minge were a 1970s British television dance troupe, who are best associated with their appearances on the BBCtv music chart show Top of the Pops between 1970 and 1981. In an era before pop videos, they danced to songs whose original artists were too famous to be bothered to perform them live. The troupe became a regular feature on the show with their fan base consisting entirely of Dads and pubescent boys, as well as the occasional confused lesbian.

A Tinge of Minge was the brainchild of Stefan Kuntz, (a German choreographer responsible for the short-lived 1960s dance outfit Totale Kuntz). The dancers were selected by the usual BBC open audition process, or pleasuring the Chairman of the BBC, as it was known in industry circles. A television series following the girls who won passage to the final 10 (before being whittled down to the winning five) called Sniffing Out The Minges was broadcast in the run up to the unveiling of the dancers on June 15th 1970.

A viewer competition was held by the children's TV programme Blue Peter to come up with a name for the group. Amongst the list of candidates were On The Whole, Front Bottom, Beef Curtains, and Lawrence of A Labia, before ten year old Tommy Taylor from Leeds was selected as the winner for his entry A Tinge of Minge. 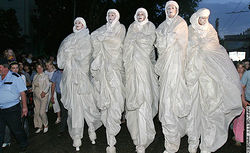 A few moments prior to the first public flash of The Minges in 1970.

The original Tinge of Minge line-up consisted of:

Each member of the group was given an alias by Exchange & Mart magazine in 1971, which were adopted by the group and media alike: Bunty, the elegant group member from a wealthy background was named Doublebarrel Minge; Debbie known for her long, flowing locks was Hairy Minge; Dolly, the baker's daughter was nicknamed Crusty Minge; Jessica, the youngest member was called Tight Minge; and Cherry, the keep-fit fanatic known for her love of rigorous exercise was named Sweaty Minge.

Dolly stood down from her dancing duties in A Tinge of Minge towards the end of 1974 to concentrate full-time on her love of gardening and prostitution.

A Tinge of Minge continued as a four-piece until the Spring of 1976 when Jessica left A Tinge of Minge to begin a five year prison sentence for the brutal stabbing of her husband's mistress, and TV licence evasion. She was replaced by the São Paulo-born exhibitionist Estella De Santos (Brazilian Minge). Estella subsequently made her TOTP debut on 28 December 1976. She appeared on stage being "deprived of her clothes" by Alf, one of the show's cameramen (later, it emerged that this was the 1st prize in the BBC Christmas raffle that year), before Estella performed "Fellatio" (a dance craze originating from her Mother's dance school) on Alf live on stage as part of a routine to Gilbert O'Sullivan's "Get Down". (It appeared lucky Alf had also won that year's 2nd prize). Rumours that a Pearl Necklace was the raffle's booby prize, were strenuously denied by a BBC spokesperson.

Among the hundreds of A Tinge of Minge literal interpretation routines for Top of the Pops, the most fondly remembered include:

Unfortunately, owing to the BBC's policy of erasing its material soon after transmission, many of the Top of the Pops episodes featuring A Tinge of Minge were lost.

However, in 1998, an article in the now-defunct children's pop magazine Smash Hits entitled "Minges Rubbed Out" dealt with the corporation's successful recovery of many recordings from private collectors and overseas broadcasters. The article described how over 4000 hours worth of video tapes of the Minges' performances from the late 1970s were discovered, following a tip-off, in the house of Mr Neville Sanderson from Basildon. The videos had been meticulously catalogued according to the amount of clothing discarded by the girls in each edition. It was alleged that Mr Sanderson was viewing one of these recordings when the Police arrived to arrest him. 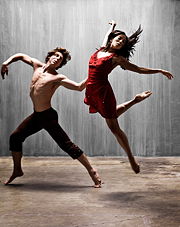 The Dancers' method of training in a wind tunnel was frowned upon by some professionals.

In 1978, A Tinge of Minge were provided with their own 30 minute extravaganza, entitled Minge At The Weekend. (The success of the format was sold to the United States and was broadcast in 1982 under its American title Saturday Night Beaver). Although the line-up of A Tinge of Minge was exclusively female, some routines in these new shows involved the girls dancing with male partners. (The male dancers later broke away on their own, performing as Legs and COck).

On a highly controversial edition of Minge At The Weekend transmitted on 24 September 1981, new recruit Gloria Stits (real name Maude Boggins) performed a routine with a male dancer called Stan to Diana Ross and Lionel Richie's "Endless Love". Both dancers performed in blackface before ending the routine by having "Endless Sex" in front of the live studio audience. Consequently, the ratings for the following week's show went through the roof.

~ a jubilant Stefan Kuntz outside The Old Bailey

Creator Stefan Kuntz was sacked by the BBC in 1980 after a Come Dancing dispute in which he attempted to enter several of the male competitors. In reaction to his dismissal, Kuntz went onto create German mastergroup "Pubic Herr", which many believed to be a copyright violation of A Tinge Of Minge brand.

The BBC, who held the rights to the Minges took the choreographer to court. In a test case entitled Kuntz vs Minge, the Judge ruled in favour of Stefan Kuntz to whom the BBC were obliged to pay court costs. The Times newspaper followed the ongoing saga with the now-infamous headline: "Minges Shafted!" The court case was deemed to be the death knell for the girls' television career. The troupe's last credited performance was on the 15 October 1981 edition of ToTP, dancing to "The Wank, Wank, Wank Song" by Ballbag. A change of management at the BBC saw the Minges being pulled off after this final show.

The gaping hole left in their 8.30pm time slot on BBC1 was filled by a number of prepubescent dancers dressed as prostitutes in an ill thought out show hosted by 70's crooner Gary Glitter entitled "Under 8s After 8", which lasted just one season. Recent comments from the Head of Light Entertainment suggest a comeback for the format of the show, backed by the government, under the working title "The Register".

In 1984, an impalement involving her boyfriend paralysed Estella from the waist up. With fully working legs, she continued to dance for several more years before retiring in the late 1990s.

Bunty Aston-Hamshank made several attempts to revive the group, more recently enlisting the services of her two flame-haired daughters. They last appeared on a tour of UK shopping centres in 2007, under a new name Bunty's Ginger Minge. Talk of a partnership with former Spice Girl Geri Halliwell are as yet unconfirmed.

Debbie Murkin attempted to forge a pop career, enjoying two Top 30 hits in 1989 called "My Juice" and "Sticky Love" before retreating into obscurity. Dolly Byrd became a successful businesswoman, seemingly keen to put her Minge days firmly behind her. Cherry Bakewell who underwent perhaps the most dramatic change to her life is now a supermarket manager called Colin.

But for middle-aged Fathers and hormonal teenage boys, Britain in the 1970s will be forever tinged with their memories of the Minges.