From Uncyclopedia, the content-free encyclopedia
(Redirected from Witness Protection Program)
Jump to navigation Jump to search

Witless Protection Program (file info)
Uncyclopedia has an audio version of this article. 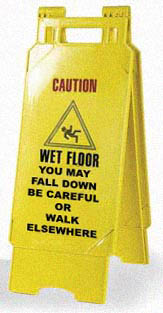 The true history of Witless Protection can be traced all the way back to the Ten Commandments. According to the Bible, God looked down upon the witless masses and decided they needed a set of guidelines to keep them from harming each other. Commandments such as "Thou shalt not kill" may seem obvious to us now, but only because of the Commandments.

Even though the seeds had been sown for such a program, the Witless Protection Act was only passed in 1971 (9 years after the program was established), when the United States had reached all-time low Common Sense levels. Senator Strom Thurmond petitioned Congress to pass this act, in his words, "for all them dumbass whipper-snappers that don't know not to lick live wires or stick their fingers in the electric pencil sharpener. Chrissake, people. Y'all don't have the sense to even come in out of the rain!"

Congress, not knowing any better, passed the act.

The revision of this sign has led to a dramatic decrease in injury, thanks to the Witless Protection Program. 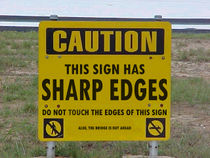 Witless Protection is not an exact science. Many of the program's protective warnings have undergone revisions since their inception.

The first warning issued under the Witless Protection Program was a sign for convenience store ovens. The sign originally read "Caution: Hot Surface", with the hopes that this would prevent the witless from touching the oven. However, in 1983 a man severely burned his finger testing to see if the oven was indeed hot. After this, the sign was revised to read "Caution: Hot Surface. Do not touch!"

In a similar case, packets of silica gel were initially labeled as simply "Non-Toxic". When it was learned that people had taken this to mean "go ahead and eat this", the label "Do Not Eat" was added. 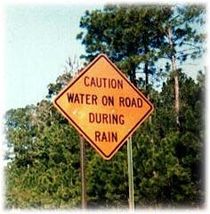 Do we even need to comment on this one?

Likewise, the Washington Biological Survey has had to reword the "Wash. Biol. Surv." wildlife tags its researchers place on crows due to complaints that the crows, once washed, boiled and served, tasted simply terrible.

The sign "Wet Floor" has also been problematic. The wording was recently deemed to be nonspecific, and offered no alternate course of action. The sign currently reads simply "Wet Floor". Under recent proposals from the Witless Protection Agency, this wording would be revised to read "Wet Floor. You May Fall Down. Be Careful or Walk Elsewhere." It is hoped that these changes will help to prevent the witless from acting carelessly around these floors, as well as disambiguating the signs so they are not interpreted as orders.

The following is a list of warnings issued for products and activities: 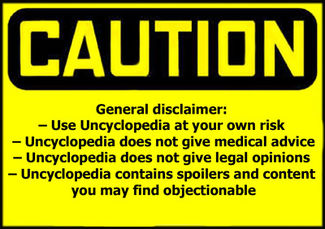 Caution: This sign will not protect you from being witless. Use at your own risk. - WPP

Featured Article  (read another featured article)
Featured version: 28 January 2007
This article has been featured on the front page. — You can nominate your favourite articles at Uncyclopedia:VFH.