From Uncyclopedia, the content-free encyclopedia
(Redirected from User:Mhaille/HowTo:Become A Psycho Killer)
Jump to navigation Jump to search 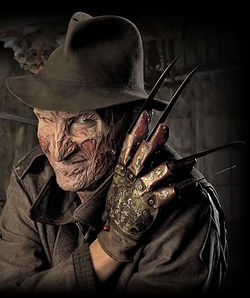 Psycho Killers make excellent role models for the criminally disturbed of all ages.

For those without comedic tastes, the so-called experts at Wikipedia have an article about Psycho Killer.

Should you be able to answer yes to the majority of questions above chances are that you could be a potential psycho killer. Instead of running away, you should consider accepting the many benefits associated with the role, which include the respect of your peers and lasting fame. Professor David Byrne of Sermo Caput Capitis College has written a leading report on the subject.

In the history of the world few things have guaranteed that your legacy and memory will live on long after your death than the act of becoming a psycho killer. Who now remembers the guy who built the first wheel, or the bloke who first thought of milking a cow, or even that geezer who invented the DVD? Simply by the simple act of murdering a selection of prostitutes or wearing the freshly skinned flesh of decaying family members you can achieve lasting fame and the admiration of lonely weirdos the world over.

Very few who have achieved fame have done so without thinking ahead, as the old saying goes "if you fail to plan, plan to fail". Before starting on your career as a Psycho Killer you should spend time considering a number of important factors.

"Yes Mother, THEY will pay for their sins..."

Murder doesn't just happen, it is a carefully thought through processes which begins with the basic need of having the right tools to perform the job at hand. Opportunity may occur at any time, just a basic level of planning will allow you to take advantage. Is your boot large enough to contain a corpse? Is it clear of other goods? This planning, or "premeditation" is what seperates the wannabe sociopath from the dyed in the wool, bloodsoaked mass-murdering nutjob. Such is the fine line between failure and success.

Useful tools may include:

Few of us are able to put in the many man hours to hone our skills as a Psycho Killer, only a few small number of people are able to practice their craft on family members and neighbours. Fanatically studying your favourite murderers is a way to pick up important "tricks of the trade", such as feigning injury and asking attractive young ladies to help you to put your shopping in the boot of your car, but it is no substitute for actual, hands on practice.

The logistics of death are impossible to contemplate without actual experience. Practising on neighbours' pets and wild animals is one way to perfect your technique with little publicity until you are ready to unleash yourself upon the world. Gaining experience of transporting bloodied corpses without detection, issues surrounding slicing up and the disposal of bodies can all be addressed in a relatively safe environment.

A number of individuals involved in the music industry have expressed interest in the world of Psycho Killers. Dave "Crazy Legs" Mustaine in his autobiographical "Killing is my Business, and Business is Good" cites his fascination with the act of murder and killing people in horrible, nasty ways, frequently aimed towards Metallica drummer Lars Ulrich. Wizened, British rocker Ozzy Osbourne has based many of his song lyrics, as well as his stage act, upon the practices of Psycho Killers.

Many successful movies, such as "Henry: Portrait of a Serial Killer", "Silence of the Lambs" and Disney's "Bambi" have done much to show the more human side of psycho killers to the general public. Hollywood has long sought to stop the exploitation of mass murderers for cheap thrills and to present a more balanced view of the average life of sociopaths and psychopaths within the community.