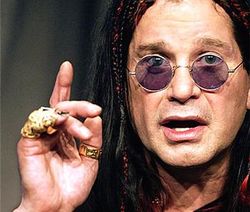 Principle Prophet of Ozzfest Destiny, John Michael Osbourne delivering a blessing on all true believers at a recent gathering. Although hard to understand the benediction is considered to be mumbled softly in Latin.

Ozzfest Destiny is a belief in the God-given right to bite the heads off of small creatures and to urinate on national monuments. Popular within the United States (and in some years, Europe), it is the only philosophical theory that claims God and the Devil are working in tandem.

Historians have noted three key themes that are usually touched upon by advocates of Ozzfest Destiny: 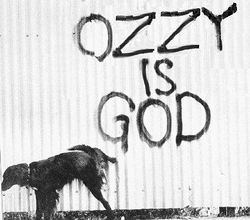 The spread of Ozzfest Destiny has had serious consequences on native peoples the world over. Many have rejected traditional forms of dress in favour of dark clothing, including leather, demin and garish cotton-based items featuring graphics of inverted crucifixes, mythical creatures and semi naked females in suggestive poses. Further to this, and often at odds with the dominant cultural traditions, Ozzfest Destiny has been shown to influence a change in musical and cinematic tastes in favour of loud, aggressive and often doomladen genres, often performed by artists with unusual names such as Quamire Blinkinsop, Dio and Zodiac Mindwarp.

Advocates of Ozzfest Destiny insist that the movement represents a paragon shift that can only truly be appreciated whilst sufficiently inebriated or otherwise under the influence of enough mind altering substances to down a large rhino. By playing music so loud that it can be heard in the next country over, proponents believe that we may all benefit from a future filled with sex and drugs and rock n roll, and justice for all.

From its inception onwards the primary font of all wisdom pertaining to Ozzfest Destiny has been John Michael Osbourne, an out of work entertainer and sometime street vagrant of Birmingham, England. From an early age John had an attraction to the dramatic forming a little known band of minstrels.

Supporting her husband as "Lady of the Holy Sepultura" Sharon "SHARON!!!" Osbourne is an often vocal and occasionally outspoken advocate for Ozzfest Destiny.