UnNews:Zombie asks for "tolerance and respect"

Rob is an ordinary, down-to-earth zombie, who feels as though society is letting him down and has been doing so ever since he was born. During an interview between him and me, he let free his personal feelings and opinions on the way that the world has generally treated zombies such as he over the years, and tells a sad story of an unseen discrimination within the depths of our civilization. Over a plate of offal and various crimson-coloured spirits, we began talking. 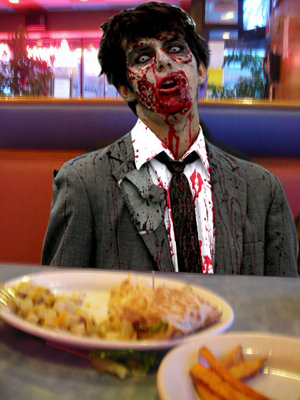 Rob's sad story of not belonging is echoed in his distant gaze.

I first ask him of his history, and how he dealt with issues growing up. “I was never really that interested in school”, he tells me. “Most of the stuff we learnt was really quite over my head most of the time… I didn’t really fit in that well.” I delve a little deeper and ask for specifics. “Well, everybody could tell that I was different from day one. Perhaps it was my abnormally-angled neck, or the blood stains all over my uniform, or maybe the half of my cheek that was missing causing my jaw to show all the time on one side of my face. Nevertheless, I was treated differently by everyone because of this. People would never sit near me, and whenever I put my hand up to answer a question the teacher would never pick me, though that was probably due to the fact that my forearm would usually snap off and fall to the ground most of the time.”

When I asked him about his social life, he hesitated to begin speaking again. “I was never really that popular, both in and out of school. Even the teachers didn’t like me, ever since the incident in my fourth year involving a girl sitting in front of me at the time… Ever since then the “hands on heads” rule was enforced much more strictly in my presence.” I asked him whether he had had any hobbies when he was a kid. “I loved to play rugby when I was young, though most of the contact sports back then were too physical for me. I ended up with broken and dislocated bones every match I played (well, even more so than usual), and the stressful nature of the games usually caused me to literally fall apart on the field. My flailing limbs were also a hazard for other players, especially when I was playing squash.”

I inquired about his life post-schooling. “Well, my mum was an accountant and my dad was an economics teacher, so I always had that both those paths in my mind as possible careers, but in the end I felt that where I really belonged was on film.” Rob is currently training to become a professional film extra, and has already had some guest appearances on some major movies such as ‘Boy Eats Girl’ and ‘Laundry of the Dead’. “I had a lot of fun being on set and filming those movies, and I certainly hope that in the future I will be offered the part of one of the more prominent zombies in a film – like the one that realises how to open a door or the one that can vomit radioactive gloop on people.” Marital status? “I was married once, to a coroner I met one day on one of my late-night hobbles through Central Station. She was really nice and all when I first bumped into her, and we soon realised we had a lot in common.” What happened after that? “It lasted around three years, after which I caught her cheating with one of my best friends, a vampire I met during high school. Needless to say I was cut up inside, figuratively for once. We ceased contact and to spite her I ran off with one of her clients.”

After washing down some tripe with a tall glass of vodka, I asked him of his life today, and whether or not he believes that discrimination against zombies still exists in our society. “Oh, absolutely. I guess it would be hard for you to notice, considering there aren’t that many of us still around these days, but there are some subtleties that can be picked up when you’re in public. The fact that people seem to scream and run away hysterically from me could probably count as one instance. I’ve also had some problems holding down part time jobs.” When I asked him to elaborate, he replied “Well, I think that first impressions always count with employers, and in my case, those first impressions are never really that great… I reckon I’ve been fired from many of my jobs due to my physical appearance, though that’s never the reason they give me. My secretarial occupation for the Minister for Health was one of the first that went down the drain, as was my car salesman position, even though I got customers to sign contracts the fastest in the business. My position as a baby photographer also didn’t turn out as well as I’d hoped.”

When I asked from him the message he wanted to get out into the world, he replied with “I just want us zombies to be treated with the same respect and decency that everybody else in this world is treated with… or maybe even just animals, I’d be happy with ‘animal’ status. The point is, I really am a normal kind of guy; I hate telemarketers just like everybody else, I love to watch movies (Land of the Dead – feel-good movie of the year!), and I love to listen to music (Cher’s tracks remind me much of my family groan-a-longs during long car rides). My hobbies include going to the morgue, and I enjoy moaning in my spare time. I really just want the world to know that zombies are generally fun-loving and decent, and should be given a chance in today’s society.”

Finishing off with a realistic ‘cranium-shaped gelatine’, I asked him his plans for the future. “Well, I really want to save up some money and travel the globe to taste some new foods… perhaps I’ll go to Asia, I’ve always wanted to try Japanese."