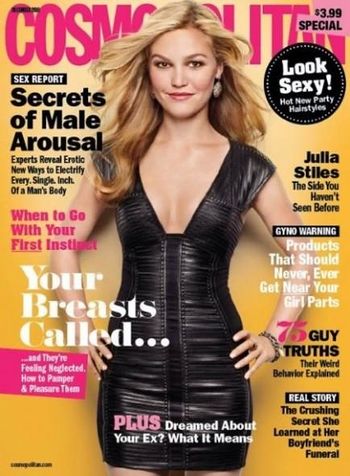 NUDE WORK, NY – The publisher of Cosmopolitan, a women's magazine, claims to love men, although, she insists, women are the superior sex. “Anything a man can do, a woman can do better,” Justine Southall declared in a recent editorial, and she has the scientific data to support her claim.

Women are cleaner, according to a study by San Diego State University, which Southall's publication financed. “They have to be,” Southall explained, “because men are not only pigs, God love 'em, but they're chauvinists, too. They're not going to lift a finger to help with housework.” Such chores as cooking, cleaning, doing dishes, and washing the laundry, men say, is “women's work.” “Don't expect your significant other, if he's male, to clean a toilet, take out the trash, scrub the shower stall, or change a baby's dirty diapers. Those jobs are beneath him. Therefore, by default, women are cleaner than men.”

“We interview better,” too, Southall assured her readers, backing up her assertion with evidence that her magazine obtained by financing a study by the University of Western Ontario. “Unless they're modeling for Playboy or are strutting their stuff on a Victoria's Secret catwalk, women are going to be paid less than men, even if they are doing the same work, so they have an edge over men that gives them more confidence at interviews. Less pay equals more confidence.”

According to a “recent study” by an unnamed organization, women also “evolve hotter.” Thanks to cosmetics, plastic surgery, clothing designed mostly by gay male fashion designers, stylists, special effects, and airbrushing, “women are getting better looking while the appearance of men, on average, stays roughly the same.

Women survive automobile accidents better than male drivers, Southall told her readers. No one knows why, for certain, Southall said, although the fact that Cosmopolitan underwrote the study conducted by Carnegie Mellon University may have something to do with it.

Women are more likely than men to talk through their problems “for an obvious reason,” Southall said. “Women love to yak. We never shut up. We talk about everything and everyone—sex, jobs, marriage, our husbands' and boyfriends' penis size, and, of course, our problems,” most of which we bring on ourselves because of our tendency to talk about everything and everyone.” Indeed, the very fact that women have more personal problems than men do is another reason that women tend to talk through their difficulties more than men do. “Men don't have as many personal issues as we women do,” the publisher admitted. “They're not histrionic.”

Women are more “recession proof,” too, according to the Bureau of Labor Statistics. More men are laid off than women. “There's two reasons for this,” Southall explained. “One, male-dominated fields of employment have been harder hit by the economic downturn than hairstyling, cosmetology, nursing, and other women-dominated fields, and, two, women are more affordable employees than men because, typically, women are paid less than men are paid, even for doing the same jobs."

According to the Department of Education, more women than men are enrolled in college, women complete college faster than men, and more women graduate than men because “most professors are heterosexual males and, as such, they are not interested in giving good grades in exchange for sex when the student who offers such a barter is male rather than female. “And remember,” Southall added, “women are better looking than men, thanks to cosmetics, plastic surgery, clothing designed mostly by gay male fashion designers, stylists, special effects, and airbrushing,” which men, typically, do not use.

Women eat more healthful meals than men do, too. “Men load up on pizza and beer, while women nibble on vegetables and sip wine,” Southall said. “A woman has to maintain her shape if she expects to compete with other women to snare a man, but men can be as fat and hairy and ugly as they want to be, as long as they have money or power or brains. I mean, look at Hugh Hefner!”

Men do not live as long as women. “We harp and nag and cry men into early graves so we can spend away their earnings in our golden years,” Southall said. “Face it, women are not just the gentler sex or merely the sexier sex, but we're also the superior sex.”

Hefner, the publisher of Playboy magazine, said, “Women are sexy, sure, but wait until I pay for a bunch of scientific studies of my own; then, we'll see who is really superior. My money's on men. Sorry, ladies.”